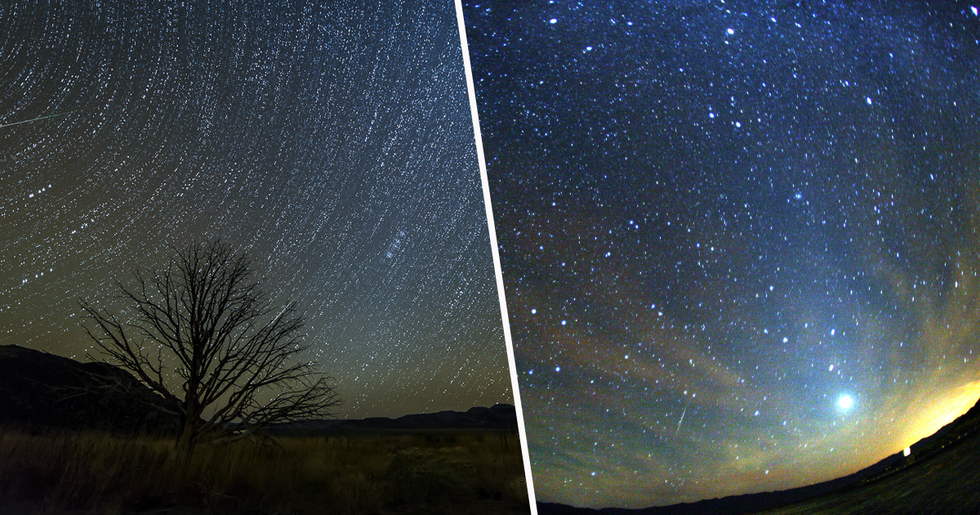 What a week it's been. It's just been announced that we're set to see an unprecedented amount of shooting stars in the next month.

And that's not all. Scroll on for ten more unmissable stories.

Something very exciting is set to hit the skies over the next month ...

The Orionid meteor shower is beginning this October.

It begins tonight and will go on until the 21st!

It's because earth is passing through the debris left behind by Halley's comet.

And what we're seeing in the sky is gas trails left by this space debris.

Fancy trying to catch a glimpse?

The American space agency shared a blog post with advice, including to, "find an area well away from city or street lights. Come prepared with a sleeping bag, blanket or lawn chair."

And there have been some fascinating news stories this week that took place a little closer to home, too ..

This summer, Chrissy Teigen and John Legend shocked the world with the announcement of their third pregnancy.

But this week, tragedy struck.

Teigen had been suffering from complications during her pregnancy, and took a major downturn.

Teigen shared an emotional message on Instagram to the child she lost.

"To our Jack - I’m so sorry that the first few moments of your life were met with so many complications, that we couldn’t give you the home you needed to survive.  We will always love you." Read the full story here.

9. The Tragedy of Mark Ruffalo Just Keeps Getting Sadder and Sadder

Mark Ruffalo is known as one of Hollywood's most beloved stars - but news of his tragic life was unearthed this week.

Behind his smile and wink, Ruffalo has had a life no one would wish for.

From mental health struggles to the deaths of loved ones, Ruffalo certainly hasn't had it easy.

It makes for a pretty harrowing read.

8. Experts Decide Who They Think Won the First Presidential Debate

If you've been living under a rock, this week was host to the first presidential debate.

And let's just say, it didn't make for easy watching.

Although the hilarious Twitter reactions kind of made it worth it ...?

But who actually came out on top?

Well, experts have weighed in with their verdicts - which you can read right here.

This was all thanks to a rather poor word choice.

And, needless to say, it got the internet feeling hot and bothered.

What do you make of the furor?

Want to read more before you make your mind up? Go ahead ...

6. Teacher No Longer Allowed To Teach Kindergarten Class After Getting Eyeballs Tattooed Black

Ok, now for something completely different.

His body is 100% tattooed - and yes, that includes his eyeballs and his tongue. Yikes.

He's so dedicated to the body mod life, it's cost him his job.

Want to learn more about this ... ahem ... colorful character? Get the lowdown here.

5. Thousands Unfollow Dwayne Johnson After He Endorses Joe Biden To Become Next President

Ok, back to politics - but this time with a celebrity twist!

But it didn't go down too well with many of his fans.

In fact, some of the responses were truly brutal.

4. Dax Shepard Has Relapsed After 16 Years of Sobriety

Dax Shepard is one half of one of the most beloved couples in Hollywood, alongside wife Kristen Bell.

The couple have made it through some majorly tough times.

Shepard has been open about his past with addiction, and Bell has always been vocally supportive of her hubby.

But this week, he shared some sad news.

He'd relapsed and been taking opioids once more. There was a bright side though - he shared he was once again seven days sober. Read more here.

We all know the tragic story of Nicole Brown Simpson.

But this week, news of a new documentary was released.

It's set to air on October 15th and offer new insight into the case - alongside Nicole as a person.

And most shockingly of all?

Never before seen excerpts of her diaries will be made public for the first time. Curiosity piqued? Click here.

He''s been in the acting biz for decades.

But, as he approaches 84, he reflected on the end of his life in a heartbreaking interview.

"Your life is terminal. It’s a terminal condition, you’re not going to get off the planet alive."

"It’s a sad subject still, but that’s the inevitable." Want to read more? Check out the interview here.

1. Barack Obama Named Most Admired Man In The World

Let's end on a happy note, shall we?

He's been named as the most admired man in the world - a pretty big deal, right?

And let's just say the top ten had some surprise additions.