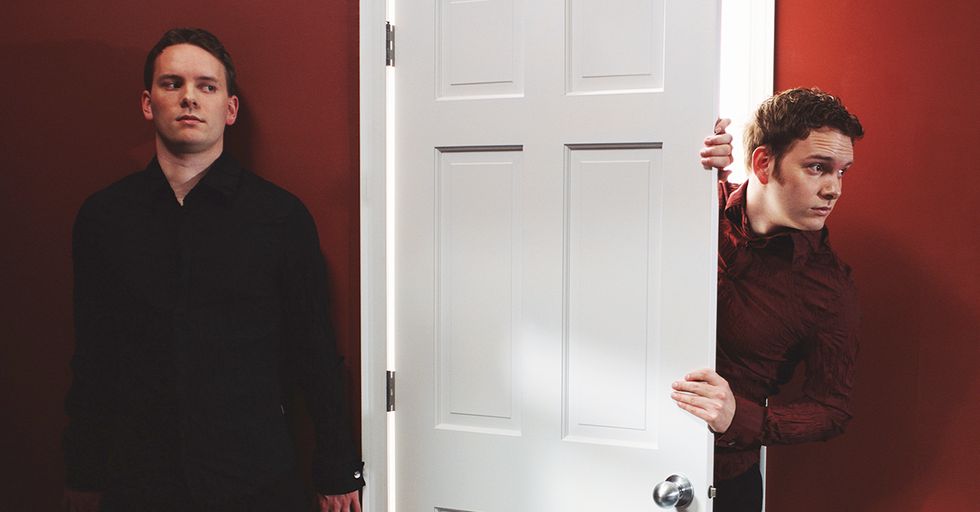 29 Psychological Tricks You Can Use to Drive People Nuts

Most people are content to go about their daily lives and avoid rocking the boat. They wake up with their alarm clock, do good work at their job, then return home to enjoy the evening before doing it all over again the next day.

There are some people out there who just want to watch the world burn. They’re not necessarily evil; they just enjoy shaking things up and throwing off the status quo every now and again.

And admit it — we kind of like having people like this in our lives! They certainly keep things interesting.

If you have any interest in flexing your own anarchy muscle, a good way to start is by subtly messing with other people’s minds to the point that they’re not really sure what to believe anymore. Don’t know where to start with that? Well, you’re in luck.

There are plenty of ways to keep people super confused.

A recent AskReddit thread asked people to share their own examples of subtle ways to mess with people — and Reddit delivered!

I tell people "no sneezing" when they sneeze. It confuses the sh*t outta people who realize I didn't say "bless you." –Takeshei

Never done a handshake before?

Whenever someone comes to shake my hand, I move my hand slightly to the left. All it takes is a little movement and they completely miss my hand. –DBones90

Had a manager a long time ago who wore a really nice hat outdoor (he was a little old-fashioned). My co-workers and I found the exact same hat at the local mall and bought two. One was a 1/4 size larger, the other a 1/4 size smaller. Every now and then when he'd leave the hat in his office, for instance, a trip to the restroom, we'd switch hats. The questioning look on his face every time we switched was priceless. The size difference was just enough to mess with him, without making the hat look weird. I don't know if he ever figured it out, it went on for a year and was still going on the day I left. –d2enthusiast

I'll usually listen to whatever someone is saying and then reply with, "well you know what they always say." Then I just stop talking and never acknowledge ever having said that. –Atear This next trick is a great response to that question everybody asks but no one really wants to hear the answer to.

The origins of mustardman.

In my old days as a server, I would sneak packs of mustard into coworkers pockets or aprons. I was eventually found out and titled the mustardman. –Dragothor

I tell people "No hablo ingles" when they try to stop me on the street and sell me something while speaking Spanish. They get confused for a moment and I slip away. –Lolasglasses

I'm going to start doing this.

All those useless things you sign up for and they need a number but you know telemarketers will call? I use my old work number. –shaka_sulu

Someone leaves gnomes in my parents garden. We still don't know who but it happens every time they have a big gathering. –maggieminto If you work in an office, you're going to love this next one!

I hit CAPS LOCK on my coworker's lock screen every time he leaves his desk. –ArrowNG

Whenever telemarketers call me I flip the convo around to the patented line of Tupperware I created (I didn't) and no matter what they say I steer them back to my Tupperware, They usually hang up on me. –olygote

This is pure evil.

Maybe it it a glitch in the matrix!

Where I live, there’s this walking path that’s about 5 miles. It’s alongside a main road. Since I ride my bike a lot, I’ve had a chance to explore, and I discovered that there are plenty of loops and trails within the perimeter of that walking path. But most people in the area just know about the main path and don’t know about these loops or how long they are. So they just walk around the circle. When I’m on my bike and I see people walking the perimeter, I’ll pass them and then do one of the inner “loops" for 5-10 minutes, then I’ll go back out on the main road. Then I’ll pass the walkers I saw minutes ago. And I’ll do it again, and again. More than once I’ve heard someone say “how did she get behind us again?" like it’s some glitch in the matrix. –spaghatta111

It's simple, yet effective.

Every now and then, I swap locations of cutlery in my kitchen. For the next few days, my housemates will be getting out a knife and spoon for a meal or a fork for a coffee, and they don't know why. –PositiveOrange

I say "no pun intended" when there is absolutely no pun whatsoever. Fun to watch people reflect on it for a bit and see if they'll ask what the pun is or just pretend to get it etc. I always tell them after a minute that I was just fucking about, don't like leaving them in the dark. –Uljira

My dad is a big sports fan. We have a great relationship, but I just don’t like sports at all. I live in Seattle now and he lives in a different state. When I go home to visit, I always ask him if the Mariners are winning the game he’s watching—regardless of the sport. He falls for it every time, and it pisses him off every time. “Nice. You’re watching the game. Are the Mariners winning?" “The Mariners ARE. NOT. PLAYING! This is the NBA finals! That’s Lebron James!" “Lebron James plays for the Mariners?!" –NikonuserNW

This is a good way to make people hate you.

Not a huge deal but I like going to bars and choosing songs on the jukebox that people probably won’t like. For example, a dive bar with a rough older crowd will get a selection of boy band songs. –whoxamxi

How's the weather up there?

I'm a very tall fellow. People frequently ask me about it. So I've taken to telling them I'm 5'17. Most people get too confused by the math to continue talking to me. Win-win. –Lukavian

On Monday and Thursday at 7:30 pm wearing the same clothes I'd go into the same 7-Eleven, get the same thing, and greet the same cashier the same way and always ask him "is there a bathroom I could use?" I did that for 3.5 months. –future-dead-guy This next trick is great if you happen to have access to a bunch of office supplies.

This would drive me nuts.

During high school, I got rather good at planting light objects in peoples pockets. I practiced with pencils backstage, as it was dark, and they hardly weighed anything. I then started using paper clips as they weigh less, but you need to get really close. Now I carry paperclips and a pencil. Hang the paperclip on the end of the pencil then use that to drop the paper clip in their pocket. Most I have gotten in one person in a day is 14. –damboy99

I wonder how long it takes them to figure it out.

I like to pretend I don’t know what a simple word means and have them explain it. –L1V1NG

This is quite elaborate.

I once recorded my chickens fighting, and using an old motion-sensing Furby, made so that any time people entered my workplace, the sound of a chicken fight breaking out went off. –WeirdWolfGuy

Having a disagreement with someone and then say 'yeah OK you're right' and walking away. Leave them with some argument blue balls. –onlysane1 You can try this next trick right now!

Sometimes I'll just stop "talking" at random points during a conversation. Like, I'll move my mouth but cut out the middle part of the sentence. –SheZowRaisedByWolves

When I'm twisting a twist tie, I like to pinch it and twist it the opposite direction a few different times so it rewraps itself multiple times when you try to untwist it. –Rustic_Dragon

Have a friend named Carrie and I called her Gary for a good year before she noticed. –danoadd

I just say things that don’t add up with what they asked. Like, "How are you today?" “Yeah." Sounds dumb but it annoys the sh*t out of people and it’s hilarious. –uncle-marhty

Some people just want to watch the world burn.

I work at McDonalds. When I have to make more than one cone, I make one bigger so that there will be a fight. –NotThatType Share this with your favorite anarchist!