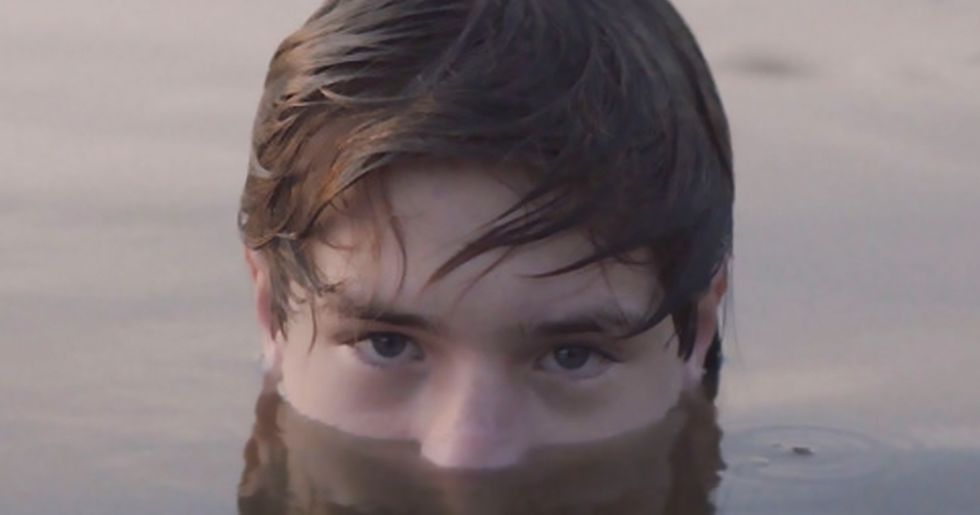 What is art? Must it adhere to a set of rigorous standards, or is any creative endeavor art? Does commerce — the act of buying and selling art — pollute its integrity? And since all artists need money to live, is all art touched by the cursed hand of commerce? Does that make all art inherently cynical? Is art dead?

Never in my life did I think that I would have an existential crisis about the meaning of art because of a Subway ad. And yet, here we are.

This specific Subway ad, though, has made its way into the zeitgeist recently because its over-wrought, Oscar-worthy performances and cinematography put it up there with the most heart-wrenching short films of the past decade.

Subway is, well, it's a lot of things.

There are more Subways around than any other fast food chain, so it's incredibly convenient if you have to eat fast. Plus, it's cheap, as their most expensive subs are still less than 10 dollars.

It's even pretty tasty (as long as you're not a maniac).

Subway offers you a ton of choices, and you can go nuts if you want. But don't. My cousin worked at Subway in high school, and, one time, we used his daily free sandwich to get a sandwich stacked high with literally all of the Subway meats. It was not as good as we expected, and we did not expect it to be good.

But one thing that Subway is not is "fresh."

I know Subway's made freshness a big part of their brand, but their vegetables always seem like they're at least a few days old. The lettuce is wilted; the tomato slices are dry and clumping together in a weird way, almost as though they're trying to re-form into a whole tomato again.

And yet, I want nothing more than a Subway sandwich right now.

I literally want nothing more right now than to chow down on a foot-long CBR (that's a Chicken Bacon Ranch for all you Subway philistines) with extra wilted lettuce and balled-up tomatoes. Why am I so ravenous for a Subway sub, you ask?

Because I think that they're employing artists.

And no, I'm not talking about that nonsense "sandwich artist" moniker that they dropped on their sandwich-makers. I think that there are some honest-to-god artists working at Subway right now.

Let's take one step back — what is art?

Art's played a role human life since the cavemen started scrawling wolves and rams on their cave walls, but that doesn't mean that we have a handle on it. At any given time, we're always embroiled in some sort of debate about what is and what is not art.

To start us all off on the same page: we can all agree that the Sistine Chapel ceiling is art.

The stunning frescoes lining the ceilings of the Sistine Chapel are unquestionably works of art; the painter, Michelangelo, certainly a genius. (Small note though, the creation of Adam illustration is a liiiiittle on-the-nose.)

The Godfather is for sure art.

A moving epic about power and corruption in America, The Godfather is the easiest film to point to when we think about whether or not film is art.

But is Spider-Man: Far From Home art?

Yes, Marvel's blockbusters are purely commercial products, made not only out of the love in their creators' hearts, but also to make a ton of cash. But if we're defining art as any creation whose purpose is to elicit a certain emotional reaction from its audience, then yes. Spider-Man: Far From Home is art. (Also, I personally believe that any movie that features Jake Gyllenhaal is art because he is a very pretty man.)

We all want to support artists.

Creating things is hard! The brave folks who earn their living making stuff are heroes and bring joy to the world, full stop. They deserve our business.

Here's why I'm thinking about art and CBRs: this stunning commercial for Subway might be art...

A more than two-minute-long Subway commercial shot back in 2016 has been making the internet rounds. It depicts a boy's life, literally from birth, through his early childhood, to his messy adolescence, until his first day at work as an adult. The commercial is beautifully shot and evokes stronger emotions than even the best Jake Gyllenhaal performance. It really does feel like art.

It's at least a Superbowl-level commercial.

As everyone knows, Superbowl commercials are the peak of commercials — all of these brands seem to think that football fans want to spend the time in between plays crying softly to themselves.

So how does this commercial about a young man's life relate to Subway?

We see this kid's struggles — his heartbreaks, his tantrums, his self-doubt. And then we're asked to buy a sandwich? How does that connect?

But, as it turns out, life has more in common with Subway than we thought.

The video ends with the tagline: "Every day, life asks you the same question: what are you going to try today?" The idea is, we should try kissing girls in lakes and shaving our heads, just like we should try something at Subway other than the CBR.

The ad went viral when it was posted by SB Nation's Ryan Simmons.

Simmons' caption, which promised "one hundred thousand dollars if you can guess the brand by the end," turned the experience of watching the video into an almost game show-like experience. I posted my guess on Twitter — with a timestamp to verify that I said it before I watched the video — and I was ready to collect that hundred K. But the ad did not end with the boy discovering that his dad was not his biological dad, as it was not an apology from 23andMe for ruining all of those families.

It feels almost like an SNL sketch, doesn't it? But no, this ad is legit posted to Subway Brasil's real-life YouTube channel. Someone thought that hyper-serious dramatic filmmaking and pounding violin music was the best way to get us to try the new Smokey Honey Mustard Sauce™, only at Subway.

... except the Subway ad has a point. Yeah, that's right! I'm takin' pot-shots at Richard Linklater's Boyhood! What, I'm supposed to be impressed that you shot scenes with an actual kid over the course of twenty-five years? Great job! If I went to movies to be impressed by determination, I'd buy a ticket to see Skateboarders Do One Trick Over and Over Again Until They Get it Right.

Simmons did say that he made one small edit to the video.

I know what you're thinking, but, no, he didn't accidentally cut out a mid-video hint that we might be watching a commercial for Subway — that was intended to be the shocker that it was.

He cut out the mom's nipple.

See, this is why I'm struggling with the art/consumerism classification of this ad! Along with the little boy peeing, leaving a nipple in the final cut is the kind of move that you make when you're not afraid to alienate people made uncomfortable by such displays — the antithesis of making a product solely to make money. These are the moves of an auteur, who must speak their truth and say what they feel, to hell with the consequences!

If I don't buy a sandwich now, am I not supporting an artist?

I mean, I did just watch — for free, mind you — a wildly moving cinematic journey. It would be a lot easier if I could chalk this ad up as commerce and move on. But if it's art? I want to at least sign up for this ad company's Patreon at the two dollars a month tier.

But one thing that's always stuck with me: the Chinese may not have a word for "art."

I had an art teacher tell me once that the Chinese don't have a word for "art." I don't know if that's true or not, because I've googled it a few times and haven't really found any confirmation — but, also, I don't know why anyone would have written an article on the words that a country doesn't have. Who's writing about the US' lack of a word for mono no aware, the Japanese concept of the bittersweet tinge of sadness that comes from being happy in the moment while also knowing that moment will one day end?

But I do like the idea of getting rid of "art."

Without a word for "art," we could simply look at any thing — be it a painting in a museum or a particularly well-designed spoon — and judge it on its own merits, not whether or not it belongs in the rarified air that is "art."

So no, this Subway commercial is not art.

If we're defining art as something created without regard for money, then this ad is not art; it does not belong in said rarified air. It is the pinnacle of consumerism. It's a piece of filmmaking with one specific goal.

And that goal is to make you want a sandwich.

Was the ad successful? Have you ordered a CBR since you sat down to watch the video? I know I have. Many, many CBRs. I... might have a problem.

But both Spider-Man and The Godfather have that same goal.

The nasty little secret at the core of every movie that we love is that they're all designed to get us to buy a ticket. One easy way to do is to have a man in a cool spider-mask run through explosions, but the backdoor way to do that is to tell a powerful story about the nature of crime and business in America.

Even the Sistine Chapel was a commission gig from the Catholic church.

The one thing that we can all point to and say, "yes, duh, that is art" was a freelance gig that Michelangelo picked up on the side to pay his rent while he worked on his true passion — sculpting nude men. Ultimately, if this Subway ad isn't art, there is no such thing as art.

But that doesn't mean that art is dead.

It just means that the term "art" doesn't do anyone — artists or consumers — any good. Hopefully, the more pretentious among us will leave the failed term "art," and all its connotations, behind.

We have to appreciate beauty wherever it comes from.

If you're used to thumbing your nose at low art, like this monkey definitely is, see if you can learn to sit back and enjoy some of these silly, stupid things, like Spider-Men and Subway ads, that one hundred percent do not belong in a museum.

So if it's a choice between Subway advertising with a cartoon sandwich...

No shade, but these sort of animated mascots are the kind of advertising techniques that chain restaurants have used for years — an anthropomorphic version of their product, weirdly begging customers to come and eat them.

Or this weird, interesting little piece of filmmaking...

I'll take the interesting bit of filmmaking every time. The fact that this ad took us on an emotional ride — one that, admittedly, had a surprising and ludicrous ending — shows that it was, in its own little way, beautiful. And appreciating beauty, wherever we find it, means that, sometimes, that beauty moves you to order a CBR.