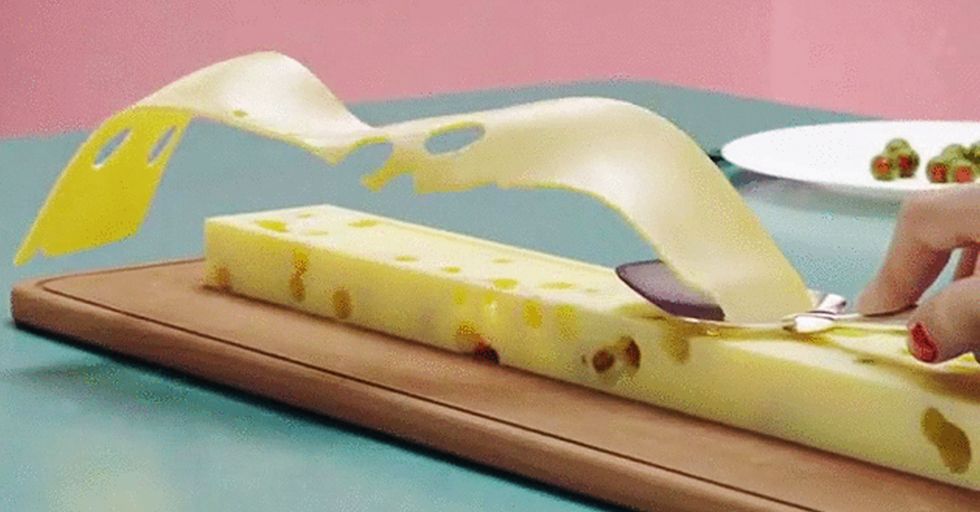 No matter which way you slice it, knives are pretty darn amazing.

First of all, they make food prep about a million times faster than it'd be without them.

But besides that, there are people who take knife handling to a whole 'nother level.

They're basically superheroes and their superpower is using knives to slice things in the most satisfying way ever. Take a look at these GIFs and you'll see exactly what I mean.

Let's start with this spool of thread:

Is it just me, or can you practically hear the sound this makes (even though it's just a GIF)? This makes me want to invest in a giant spool of thread and a super sharp knife.

Look at how thin this person is able to slice the tomato! I don't know why you'd need tomato slices that thin, but I know who to ask when I do.

Talk about cutting the cheese.

Yep. There is nothing about this that I don't like.

This one just makes me feel hungry.

I would like for this person to install their whole setup directly in my living room. Keep the al pastor comin'! This next GIF shows the best way to slice watermelon...

Watermelons are notoriously difficult to slice. Unless you have one of these amazing tools, that is.

These apple slices are even more impressive than the tomato ones:

You can literally see through them! Once again, I don't know why you'd need this, but I like that it exists anyway.

I don't know what recipe these people are going off of, but they seem to know what they're doing, so I'm not going to ask any questions.

OK, this one is seriously incredible.

Or should I say "incBREADible"? Either way, I know you're impressed.

I get it! Who do they think they are, keeping people hydrated like that? This next guy appears to hate paper...

I'm watching this happen before my very eyes, but I still can't really believe it. Is this some kind of knife magic?

A new way to shave.

This knife makes it look like the hair on this person's leg just up and decided to jump right off of it. If I had half this person's talent, I'd never buy another razor again.

I am absolutely entranced by this GIF. That's a slice of cheese that'd be perfect for a Scooby Doo sandwich!

When life gives you lemons...

Throw them in the air and chop them with a knife like that badass you are. That's how that saying goes, right?

This is a fancy heated knife that's used to remove the beeswax caps from honeycomb to reveal the honey inside. I could watch it for hours. And in case you want to see another GIF involving honey...

It's official. This is best thing I've ever seen.

How to cut sand:

Who knew that slicing sand could be this satisfying? You learn something new every day!

Your ancestors probably wish they could have used this to split wood:

Look at that! It takes a task that would have taken a lot of time and gets it done in mere seconds. That's progress.

Cutting a fresh pineapple is another task that is notoriously difficult. That doesn't seem to have stopped this guy, though.

That cucumber didn't stand a chance.

I didn't know this was even possible. Be right back. I'm going to go try this right now. Share this list with the sharpest person you know!