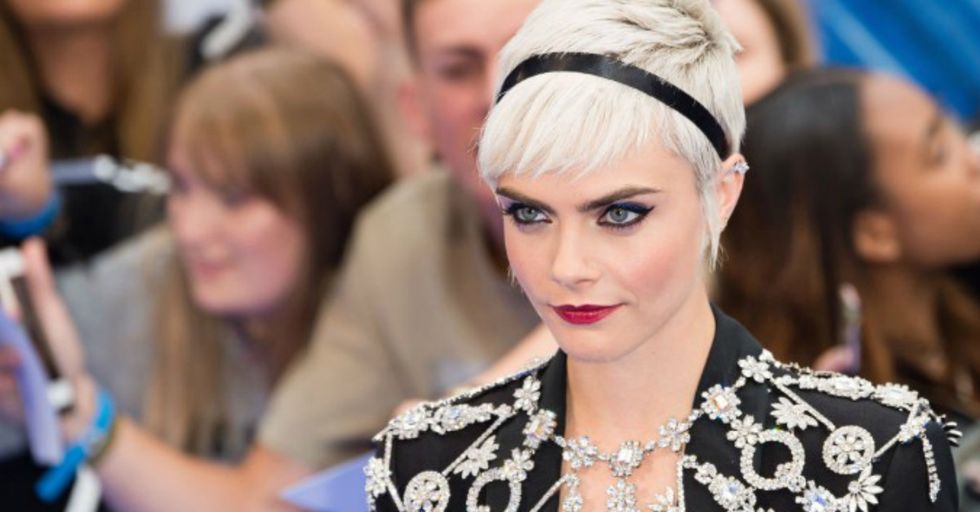 A week ago, The New York Times published a story detailing decades of sexual harassment and abuse by Harvey Weinstein. Since the article's publication, several celebrities including Gwyneth Paltrow and Angelina Jolie have come forward to share their own stories Weinstein's disgusting behavior. Actress and model Cara Delevingne is another addition to the list of women Weinstein harassed. She recently opened up about two separate incidents with him.

As people continue to come forward and share their experiences of sexual harassment at the hands of Harvey Weinstein, one thing is becoming clear: This scandal runs deep and it will have a lasting impact on all of Hollywood.

Model and actress Cara Delevingne has released a personal statement detailing her own experiences with Harvey Weinstein. They're truly horrifying.

Here's the story of her uncomfortable experience with Weinstein, which occurred during a phone call: "When I first started to work as an actress, I was working on a film and I received a call from Harvey Weinstein asking if I had slept with any of the women I was seen out with in the media. It was a very odd and uncomfortable call...I answered none of his questions and hurried off the phone but before I hung up, he said to me that If I was gay or decided to be with a woman especially in public that I'd never get the role of a straight woman or make it as an actress in Hollywood."

For Weinstein to insist that Delevingne would "never make it as an actress in Hollywood" because of who she dates is absolutely ridiculous and despicable. Weinstein's behavior in her second story is even more reprehensible: "A year or two later, I went to a meeting with [Weinstein] in the lobby of a hotel with a director about an upcoming film. The director left the meeting and Harvey asked me to stay and chat with him. [...] He then invited me to his room. I quickly declined and asked his assistant if my car was outside. She said it wasn't and wouldn't be for a bit and I should go to his room. At that moment I felt very powerless and scared but didn't want to act that way hoping that I was wrong about the situation. When I arrived I was relieved to find another woman in his room and thought immediately I was safe. He asked us to kiss and she began some sort of advances upon his direction. I swiftly got up and asked him if he knew that I could sing. And I began to sing... I thought it would make the situation better...more professional...like an audition...I was so nervous."

Delevingne also shared these stories on Instagram in a caption accompanying this graphic:

Her post currently has more than 440,000 likes and more than 7,000 comments. Most of them are from people lauding her for telling her story.

She said in the caption, "I want women and girls to know that being harassed or abused or raped is NEVER their fault and not talking about it will always cause more damage than speaking the truth." She is incredibly brave for having shared her story. More than likely, it will encourage even more people to speak out against the abusers in their life.