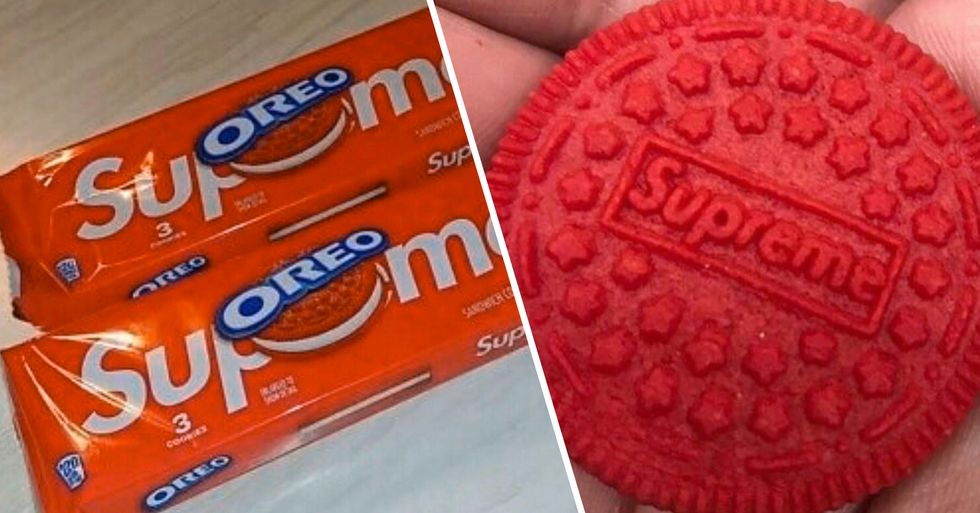 Supreme's newest Spring/Summer 2020 collection has made the headlines for providing us with statement prints and impressive patchwork. We expected this collection to be fire after the teaser video featured a hologram of Tupac Shakur wearing a pair of their branded boxers. I mean, it doesn't get any more impressive than that, does it?

Well, hold onto your snapbacks ladies and gentlemen, the revelation also saw the fashion giant collaborate with Oreo to create one of the most visually appealing cookies I have ever seen.

Keep scrolling to see why people are going crazy for this new invention...

Supreme's newest collection has us all raving.

The range was revealed with a casual look book starring Sage Elsesser and I'm going to take you through some of the new additions including this all-new Oreo cookie.

Firstly, we have two of the jackets.

I'd hate to wear this one in the rain...

Two other defining characteristics of the latest collection.

And this one may not look like it's anything out of the ordinary...

But that's because you haven't seen the back...

It really makes up for the bland front.

Yes, I think that is Mother Mary.

And the same theme stays with this piece too...

It's basically a mullet hoodie.

Business in the front...

Party in the back.

And now we've moved onto the T-shirts.

Supreme have decided to take supernatural visuals of famous faces including Tupac Shakur and create some statement pieces.

And yet another biblical appearance...

This time we have a black and white image of Jesus stamped onto a hippie-print tee to create this contrasting masterpiece. It shouldn't work, but it does.

And now the pants.

It takes confidence to pull these off.

And if you're a fan of the denim look...

These would be perfect for you.

If you're going to risk those pants, you might as well grab this bag.

Accessories are a must.

If you thought bold couldn't get any bolder.

Amongst all these new pieces, it may be hard to find a winner.

But we have one. And it's none of the products I have just shown you.

Instead, the spotlight shines on one particular food item.

Supreme's recent collaboration with Oreo was revealed straight after this Spring/Summer collection and it has taken the world by storm.

They will be released in packs of three and will cost $8.

As you can see, the original shape and design of the cookie is still the same...

But the usual dark brown color has been substituted with Supreme's iconic red and is accompanied by the brand's name stamped firmly on each cookie.

There is one pack currently selling on Ebay for $200.

So, they may be a little tricky to get your hands on. Keep your eyes peeled for the official release date so you can be the first to snatch up. If you want to read more about different Oreos, then keep scrolling.