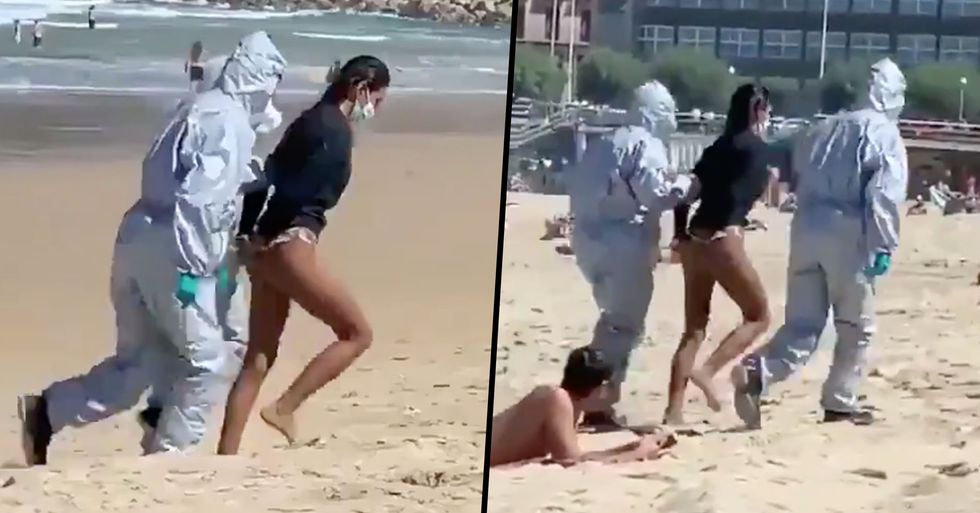 Surfer With Coronavirus Dragged off Beach by Officials in Hazmat Suits

A surfer in Spain who recently tested positive for coronavirus was dragged off the beach by officials in hazmat suits when they discovered she was breaking lockdown.

It's time for people to start taking this pandemic seriously...

A surfer in Spain recently learned the hard way to not break her quarantine...

And she was arrested by officials wearing hazmat suits in front of the entire beach.

Global coronavirus death toll 'could triple by Christmas' as cases surge around the world https://t.co/sBnNqa9mGW
— i newspaper (@i newspaper)1599375600.0

As it stands, there are over twenty-seven million cases of the virus worldwide and the number of deaths is staggering. We can't even begin to imagine what the families of those lost to this horrendous virus must be currently going through.

So when people refuse to stick to their government's lockdown rules...

It's pretty much a slap in the face for every single healthcare worker out there putting their lives on the line.

Many countries have implemented fines for those who don't stick to the lockdown measures...

But one woman in Spain who had tested positive for COVID well and truly faced the consequences of her actions when she decided to simply ignore her quarantine period and go out surfing.

The unnamed woman was surfing at Zurriola beach in San Sebastián, in Spain’s Basque Country, on Monday...

Despite having recently tested positive for COVID which, we must say, is an incredibly reckless move on her part.

It didn't take long for officials to get wind of the fact that the woman had decided to not stick to her quarantine period...

And several armed officers, a few of which were clad in hazmat suits, stormed the beach and dragged the woman out of the water.

It later emerged that the woman worked as a lifeguard at La Concha beach...

And it was reported that when she refused to stop surfing and tried to flee from the officers, she was arrested for disobeying authorities and crimes against public health.

It is also believed that one of the woman's colleagues was the one who reported her being on the beach...

And they were aware of her ignoring the lockdown rules.

And since then, the video has gone viral along with sparking global outrage over her selfish actions.

You can see her arrest here:

And make sure to keep reading to check out the frontline medical worker when she reunited with her daughters after 9 weeks apart...