Surprisingly, THIS Is the Unexpected Song That Made New Yorkers Stop and Have a Dance Party in the Subway | 22 Words 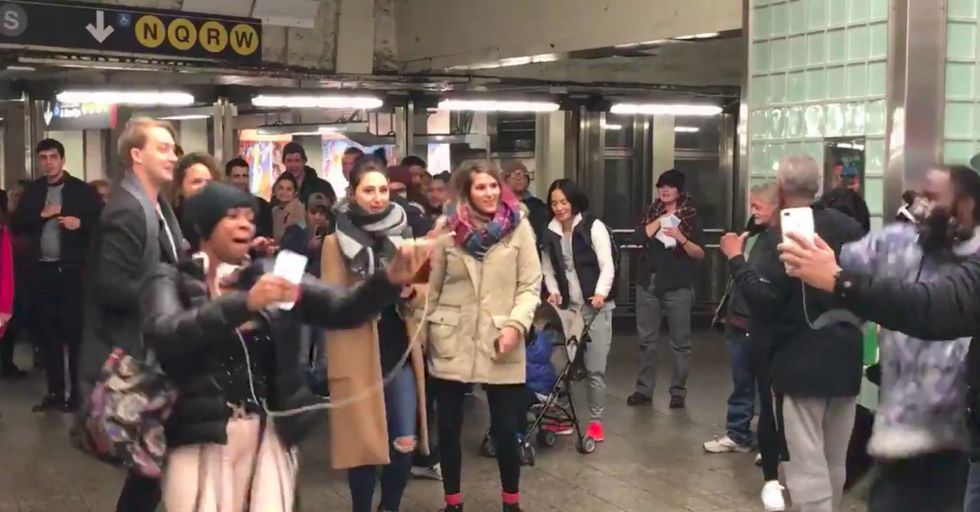 Surprisingly, THIS Is the Unexpected Song That Made New Yorkers Stop and Have a Dance Party in the Subway

Every major city in the world has a reputation – a generalization of the character of the city which may or may not be a 100 percent accurate, but is at least on the nose enough to make its inhabitants wince (unless, of course, this reputation is a nice one).

London is filled with very polite rich people who enjoy selling multimillion dollar apartments to oligarchs and absolutely despise talking to strangers. Lagos is overwhelming and full of innovators who may or may not be Nigerian Prince scammers.  Paris is filled with snobs who love making love, drinking wine, and talking with a cigarette dangled between the fingers. Los Angeles is filled with Hollywood hangers-on who do a lot of drugs and love to surf.

And then there's New York...

Ah... what do you say about New York?

It's one of the financial and cultural capitals of the world, home to Wall Street and the fashion district and a myriad of notable museums, galleries, studios and all other types of artsy corners. New York is vibrant, expansive, and it's well – rude.

And brusque. And loud. And rude. And aggressive – but very fashion-forward (well, the rich New Yorkers, anyway). The point here is, New York doesn't have the most salubrious reputation.

But then, no one expects it to.

That's part of the charm of New York. Where else do people enjoy being yelled at by the workers at their local diner – okay, so maybe the Soup Nazi is fictional – and are proud of spotting scammers at a hundred paces? Where else are the rats so bold they take entire slices of pizza for lunch?

New York has a certain je ne sais quoi, which spurs people to be their best, their most artistic.

It is this same je ne sais quoi that has birthed some of the greatest artists of our time - artists that include New York's own daughter, Cardi B. Now, before you get your underwear in a twist, we're not saying Cardi B is one of the greatest artists of our time. She has a looong road to go before she can prove the kind of lasting pop culture dominance a Beyonce or Rihanna.

She is, however, top in the lists of the most dominant musicians of the year.

The line "I don't dance now, I make money moves" is one of those chest-thumping declarations that hypes up everyone that hears it.

Just remain standing when the song comes on in a crowded club, we dare you. It's quite literally impossible to not enjoy the particular stylings of Cardi B on what is swiftly becoming the most distinctive song of the year.

"Bodak Yellow" is so dominant, it's giving the year's biggest song "Despacito" a run for its money and getting Victoria's Secret models into trouble.

You heard us right, Victoria's Secret models – as in the few of them that were caught backstage belting out song lyrics at the very top of their lungs that included the N-word. Note to the models, if you're not black, don't use the N-word – the reason for which, if you're still confused, is explained here.

"Bodak Yellow" is so hot, everyone loves it... despite the fact that no one knows what the phrase "Bodak Yellow" actually means. And by everyone, we mean New Yorkers.

On Sunday Dec 3, 2017, something very strange happened. Someone started blasting "Bodak Yellow" in the 42ndstreet 7th Avenue station. Instead of telling the presumptuous fool to pipe down in no uncertain terms, as New Yorkers will, the subway riders did something strange instead.

That's right. New Yorkers in the middle of a New York City train station began dancing to a song instead of shouting at the person playing it.

It was a miracle for the ages, it was the miracle that was Cardi B, a woman who unexpectedly worked her way from being a stripper to becoming one of the most influential musical forces in the space of a few months.

"I don't dance now, I make money moves," indeed. And for those of you wondering, this is the meaning of "Bodak Yellow" as explained by highsnobiety.

Cardi B’s record-breaking hit was inspired by [rapper] Kodak Black, specifically his 2014 song “No Flockin.’" Cardi borrows his flow, and named the track “Bodak Yellow," changing Kodak to “Bodak" because of the “B" in Cardi B. “My sister’s name, her name is Hennessy, so everybody used to be like Bacardi to me… then I shortened it to Cardi B, and the ‘B’ stands for whatever …depending on the day," she explained on The Wendy Williams Show in July.