15 'Survivor' Castaways Who Will Live on in Infamy | 22 Words 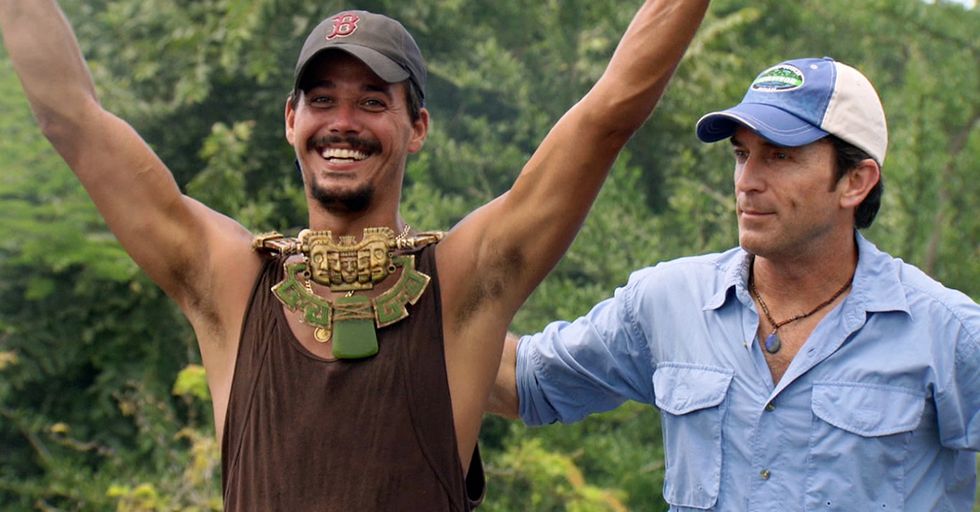 15 'Survivor' Castaways Who Will Live on in Infamy

Since Survivor’s debut 18 years ago, we’ve seen a slew of faces come, eat the occasional bug, and go. Some walked away with a million bucks, while others stumbled off into a dark jungle after hearing these now famous words: “The Tribe Has Spoken.”

For good or for bad, these fifteen players will forever live on in Survivor lore for being great TV, period. In no particular order, let’s tip our tiki torches to those who have stood and fallen in the name of the game.

Some fans call Boston Rob the best player the game has ever seen. And those “some fans" would be me. Rob not only dominated and won season 11, he fell in love, got married, and is now raising a family with fellow Survivor winner Amber Brkich – who he proposed to on the finale stage during their 2003 season! Showing us all that true love transcends all lack of deodorant, razors, and mouthwash.

Winner of Survivor’s debut season in 2000, Hatch was best known for two things: 1) Inventing the concept of alliances, and 2) Bending over naked. His first contribution made the game what it became – a backstabbing, blindsiding secret war among splinter factions within each tribe. His second contribution made him a legend.

Sue Hawk was the Midwestern truck driver who never saw Survivor’s first blindside coming. As the fourth place finisher, she threw Survivor’s very first hissy fit at the final tribal council, which is now known as the infamous “snakes and rats" speech. Sue basically read her former alliance member, Kelly, the f**king RIOT act at the final tribal, which set the bar for scary/angry jurors ever since.

Another all-star, multiple-season player and Survivor winner, Parvati was a triple threat: Brains, Body, Beauty. She used all of her skills to charm, conquer, and ultimately totally crush her opponents. All while keeping a smile on her cute little face. Memorable moment: Charming the immunity Idol right out of Russell Hantz’ weasely little hands at Tribal Council. Savage.

The Russell Hantz tornado of chaos swept through three seasons of Survivor, never reaching the million dollar goal – but not for lack of trying. As the ultimate villain, Hantz aimed to win the game by any means necessary, whether that meant dumping out his tribemates’ water, burning peeople’s socks while they slept, or lying about being a victim of Hurricane Katrina. Oh – he also found EVERY SINGLE immunity idol in existence, some without clues, just by being the night stalker he was. Although people hated him, he made for a great show.

This cop was a pro at building hilariously Scooby-Doo inspired “Spy Shacks" out of bark and leaves to crouch in while listening to his tribemates’ strategizing. Adept at double crossing, manipulating his teammates, and masterminding blindsides, Tony ultimately walked away with a million bucks for all of his efforts. But come on, he had us as Spy Shack.

The TWO-season winner, Sandra is arguably the most confusing threat to ever enter the game. No one ever thinks she’s going to win. Then she does. And does again. Her motto of “Anyone but me!" when it came to flipping alliances in order to vote people out would have been the death-knell for most. But it worked for her. And she’s got the two million dollars to prove it.

John Cochran – Best know for being the superfan that won Survivor: Caramoan

The self-proclaimed biggest fan of the game ever, Cochran came into his first season of Survivor with enough Wikipedia knowledge to fill a…spy shack? Anyway, he knew his shit. So when this knob-kneed, sunburn-prone nerd began dominating the game, no one quite knew what to do. He rose to the top of the heap by adopting Survivor’s purest rules: Outwit, Outlast, Outplay. Cochran’s ascendance from scared little fella who couldn’t play in the sandbox to king of the entire Island was truly a thing of beauty.

Ozzy Lusth – Best known for physically dominating challenges in multiple seasons of Survivor, and for having perfect hair

One third man, one third otter, one third cheetah – Ozzy was quite possibly the biggest physical threat this game has ever known. While Jeff Probst was still saying “Survivors, GO!" Ozzy had quite likely already finished the entire effing challenge. He could hold his breath for what seemed like hours at a time, making him a legend among his tribemates – who gladly ate the zillions of fish he caught. With his bare hands. While keeping his curly locks looking perfect. Basically, this dude was Millennial Tarzan.

Tyson Apostol – Best known for verbally roasting his opponents, voting himself out of the game, and ultimately winning Survivor: Blood vs. Water

Tyson has traveled the full spectrum of Survivor moments – from the dumbest move ever (effectively voting himself out of the game in a botched attempt at alliance shifting) to coming back for a big win in Blood vs. Water. Tyson was the silly kid and Coach Wade-sidekick who grew into a sly, mature player his second time around. Which no one saw coming. Also, this dude was just so damn likeable. Right?

Coach Wade – Best known for being a multi-season crazy person

How do you describe the man, the myth, the legend of Benjamin “Coach" Wade? Well, let’s see – He claimed to be a trained ninja, called himself “The Dragon Slayer," says he was once captured by natives (from unknown parts) and nearly roasted for food. So, yeah. He was AMAZING TV, and we didn’t deserve him. Survivor is a better show because of his contributions, and we thank him for his service.

Multi-season player and perpetually confused Phillip Sheppard was a a rare gift: Former Federal Agent, proud member of Boston Rob’s “Stealth R Us" alliance, and mispronouncer of EVERY WORD in the dictionary. Phillip walking around in his baggy purple undies while trolling camp for coconuts is still the gift that keeps on giving. Having a tough day? Google him.

No one could wrap their heads around Debbie. Self-proclaimed scientist, model, comedian, “smartest person in the world," fitness instructor, and Red Lobster waitress – Debbie’s title cards during her interview segments gave us all the comedy we needed for her 2-season stint. Ultimately, her unstable personality got her voted out both times, but not before she exploded on tribemates, drank parasitic water, and did a LOT of angry pushups to release the Debbie Demons. Amazing.

One of the longest lasting players to ever enter the game (repeatedly), Cirie is the woman who famously claimed that anyone could “get up off the couch and play Survivor." The once non-outdoorsy mom grew into a cunning alliance builder, challenge master, and backstabber over her years on the Survivor franchise. But as close as she’s gotten to the million bucks – she still hasn’t won!!! Tragic.

Rob Cesternino – Too smart for his own good on Survivor: The Amazon & All-Stars

Jeff Probst called Rob “the smartest player to never win" the game of Survivor. And those who watched Rob’s first season understand why: HE KNEW EVERYTHING, ALL OF THE TIME. Rob practically invented the now commonplace strategy of Tribal Council blindsides, but all of his flip-flopping ended up biting him in the ass in the end. Ah, well. We’ll always be grateful to him for trademarking the nickname “Sticks and Twigs" for his female competitors who lost so much weight during the game, they were practically see-through.