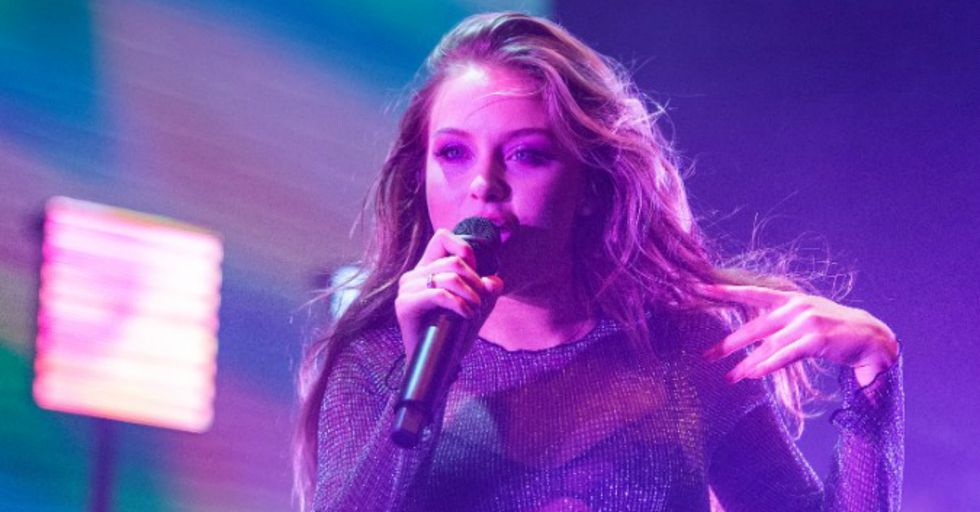 Swedish Pop Star Skewers Journalist for Writing About Her Nipples

Zara Larsson has been famous ever since she won a singing competition at the age of 10. After nearly a decade in the spotlight, she probably assumed she'd seen it all. That may have been the case until this weekend. On Friday, Larsson sang in front of a sold-out crowd. On Saturday, someone wrote an article about the performance...kind of. Rather than focusing on the singer's show, they chose to focus on her breasts.

Zara Larsson is a wildly successful Swedish pop star. She won the 2008 season of Talang (Sweden's version of America's Got Talent) at the age of 10. Since then, she's gone on to become very popular in Sweden and in several countries including Australia, Germany, and the United Kingdom.

So yeah, she's kind of a big deal. On Friday night, Larsson performed in front of huge crowd of people. International pop star. Huge crowd. If you're a journalist, there's plenty to write about here, right? Maybe you'd talk about Larsson's incredible stage presence and stunning dance choreography. You might even mention that Larsson has gone on record saying she's a feminist and a huge fan of Beyoncé. Or the fact that she just released her second album.

Or, if you're the Daily Star, you could just talk about her boobs.

In an "article" which we won't bother linking here (seriously, it's a waste of Internet space), "journalist" Jazmin Duribe chose to focus on Zara Larsson's nipple piercings. The article includes several pictures of Larsson in which, yeah, you can tell that she has nipple piercings. It also includes lines like, "The 19-year-old neglected to wear a bra on her big night and that soon became apparent," and, "It appeared Zara was completely unaware that her entire chest was grabbing the spotlight." Also, "The hitmaker was always destined for on-stage flesh-flashing." WHAT?! What does that even mean?

Larsson had the perfect response to the "article."

Imagine going to school and get a degree, only to write about the fact that I have nipples lol https://t.co/WvVgeVf2sY
— Zara Larsson (@Zara Larsson)1509301355.0

"Imagine going to school and [getting] a degree only to write about the fact that I have nipples lol," she wrote. Seriously. The fact that the "article" was written by a woman just makes it all the more frustrating. No one should be reduced to their anatomy (or piercings on said anatomy).

Larsson's fans' responses to the article were similarly hilarious.

A woman with nipples! The horror! What was she thinking, having nipples and then getting them pierced? Next, you'll be telling us that all people can choose to do whatever they want with their bodies and it's not anyone's business but their own!

Come on. We can do better than this.

Stop policing women's bodies. Stop reducing them to their anatomy. Stop saying that people are "destined for on-stage flesh-flashing." (Not only is it a super gross thing to write, it also makes exactly zero sense.)