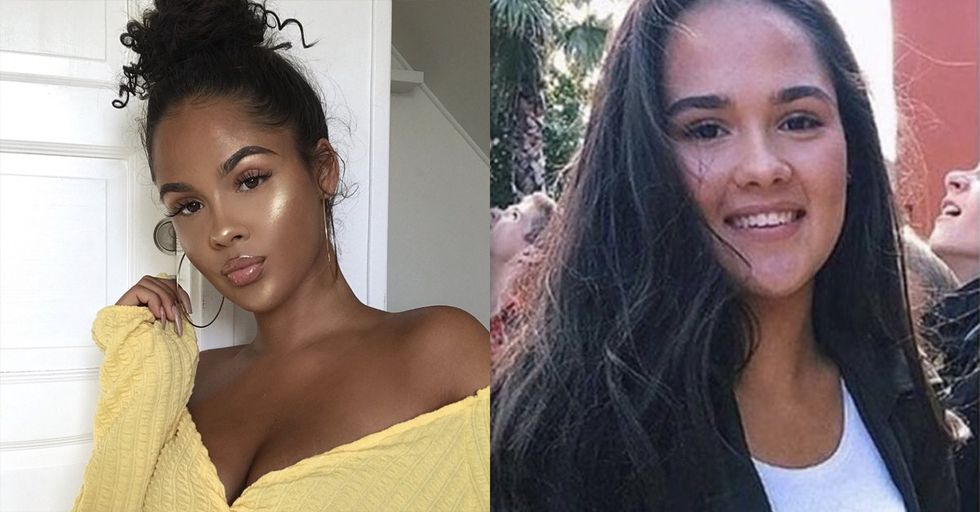 Instagram influencers are often getting caught up in online controversies. Some of these are bad, while others are just ridiculous. Instagram is nothing like the real world, and you often get called out if you are pretending to be someone you're not, which is most people online.

Recently, one Instagram user has received a lot of attention for posing as another race. The cyber celeb sparked a lot of conversation on Twitter and Instagram about cultural appropriation, mostly around women trying to appear as a different race.

Although the conversations surrounding this topic include various opinions, it's clear that pretending to be another race on Instagram is a huge no-no. Emma Hallberg had to find this out the hard way after she offended many of her followers.

This is Emma Hallberg, a 19-year-old Instagram model, and makeup enthusiast.

She also has a YouTube channel which displays one makeup look.

In the video, Emma shows how she does her everyday makeup look.

She also has her own highlighter for sale.

The cyber celeb was receiving a lot of backlash on her appearance.

Emma has claimed that she owes it to the sun for her bronzed skin.

But, are you buying that? Did we mention that she lives in Sweden? They're not particularly known for their tropical weather.

Some of her followers started questioning her true skin tone after some of her old photos surfaced, showing her skin was once much lighter than it is in all of her current photos.

That's when the comments started coming in.

Her fans were shocked to find out she is a white woman and pretty confused that they had been deceived for such a long time.

They had assumed– based on her appearance, that the Instagram star identified with the black community.

She fooled us all and did a really good job at it.

Many people on the internet were confused. Some believed that Emma was of a mixed-race.

Viewers called her out on it...

The argued that she was darkening her skin to appear as a black woman. Which can be deemed as cultural appropriation.

Others had a good laugh.

Some people did laugh about the fact that they had been fooled after putting all the pieces together.

Emma does not claim to be anything other than white.

Emma's main rebuttal for her skin tone changing was the fact that she tans very easily, so that's why there are pictures of her appearing whiter in previous years.

Because we all know how sunny Sweden is.

Anyone looking for a tropical destination?

Here you have it folks, some Swiss facts:

Brought to you by someone also from Sweden.

Some people are calling this trend...

Can we start a thread and post all of the white girls cosplaying as black women on Instagram? Let’s air them out because this is ALARMING.
— Wanna (@Wanna)1541556201.0

Some call it a modern blackface and unfortunately, this is not the first time it's happened.

We all know that any kind of blackface is wrong.

Megyn Kelly learned that the hard way after making a comment about blackface on TV, leading to her show cancelation. Thank you, next.

Is this even the same girl?

Someone posted the photo that showed Emma from a few years back looking quite different than she does now.

People were also upset because she was being celebrated on other Instagram accounts as being a black woman.

Which is so, totally wrong. She never corrected or denied those posts.

Emma posted a story on her Instagram titled "LET ME EXPLAIN" where she addressed all her followers about the accusations. She has it saved as a highlighted story so people can still read her side of this.

"I've been accused of doing frequent spray tans, taking melatonin, getting hair perms and lip injections and many more. When I haven't done anything of the above," Emma wrote on Instagram. Is anyone going to tell her that melatonin is what you use to help you fall asleep faster? This poor girl is very confused, on all different levels.

She went on to show pictures of her brother and father, claiming that they all "tan very easily."

She also showed a video of her mother's curly hair, saying that her own curls are natural and always has been since she was a child.

But why such dark foundation?

She shows a picture of her YouTube video, where she is applying foundation that is much darker than her natural skin tone. "Why my face is less tanned than my body is because I have some acne and scar issues so I use a lot of face scrubs, toners and peeling products," Emma wrote.

She also did an interview with BuzzFeed News where she further explained herself. "I do not see myself as anything else than white,'' Emma stated.

She further addressed the "false" accusations.

“It made me sad that some of my natural features are hurting and upsetting people. It also made me upset and scared that I can’t look the way I look naturally, without receiving false accusations, hate, and threats," she added.

Some people felt satisfied with her explanation, but many followers knew the issue was much deeper than just using a darker foundation and calling yourself tan.

What about the Instagram posts or accounts claiming she's a black woman? Why not address those?

his video does a great job of explaining "blackfishing" and why it needs to stop.

Emma is not the only girl who has been accused of this before and sadly she won't be the last.

Say it again for the people in the back!

One Twitter user pointed to the big picture saying, "So now she’s getting makeup deals, hair deals. In spaces that could be for black women/darker women... We are marginalized so so often do you even know how infuriating it is to see a white woman in blackface with all the features we are put down for capitalizing off it."

If you thought we were done, think again.

People found pictures of her posing with her boyfriend who, like his boo, has also been called out for cultural appropriation.

There were a few followers who came to her defense and felt sorry for all the hate she was getting.

It felt like a Chris Crocker moment for sure. But most people on Twitter were not trying to hate on Emma, but more so make this a more open conversation about cultural appropriation and how we all need to be a little more educated about it, some more than others.

This definitely sparked a pretty big conversation throughout the internet so hopefully, a few people learned a thing or two about cultural appropriation.

Let's keep spreading the word. Share this article to see what others think about Emma's Instagram page.