Every Day, This Grandpa Greets His Granddaughter at the Door and Now We Can't Stop Smiling | 22 Words 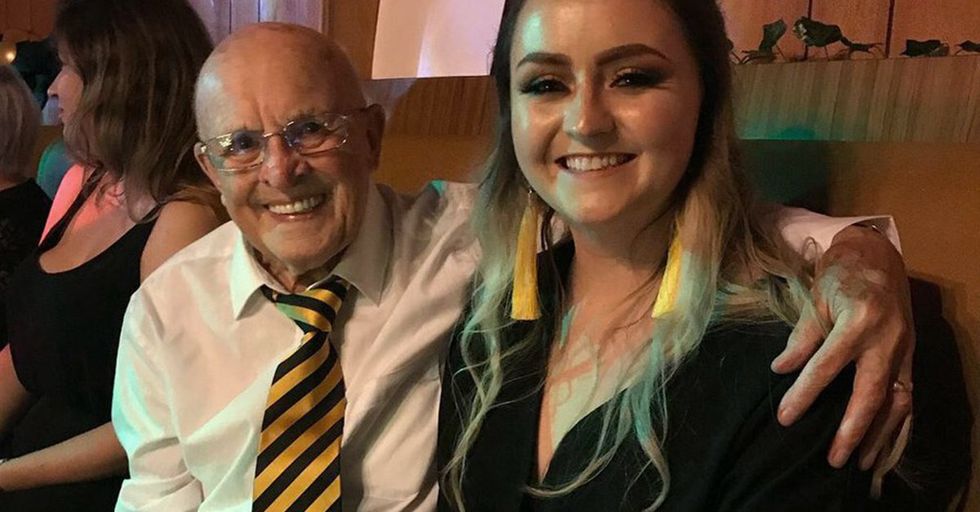 Every Day, This Grandpa Greets His Granddaughter at the Door and Now We Can't Stop Smiling

If you ever get the chance, I highly recommend becoming a grandparent. It's the sweetest gig you can get. Think about it — you get an unending supply of fondness from a sweet little kid, and you don't have to worry about all the headaches that normally come along with parenting! Doling out punishments? Instilling values? Wasting your evenings at PTA meetings? You handled all that nonsense when you were a parent! A grandparent's only responsibility is to give and receive copious amounts of affection.

And today, the internet's been blessed with a video that distills all grandfathers into their purest form. Twitter user Jen Barclay began recording her grandfather opening the door for her whenever she went over to his house, and each time, his adoration was obvious.

Now Jen's supercut of all Robert's greetings has gone hyper-viral, and if you've ever had a nana or pop-pop who loved you, you'll know why.

Look at that smile! He looks so much like the platonic ideal of a grandfather, I half expect him to ask me if I want to learn how to wood carve.

Wood carving is the favorite activity of all grandpas.

Jen and Robert are very close.

As all grandparents and granddaughters should be!

And whenever she knocks on Robert's door each week, he's always glad to see her.

My only worry here is this: how does Robert react when the mailman knocks on the door to deliver a package?

That probably doesn't feel good for the mailman.

So when Jen would arrive...

Always with a gentle knock.

She'd have her phone ready to record Robert's hello.

It is unclear as to whether or not Robert ever signed a release form for use of his likeness in new media.

Jen took all those videos and put together this supercut of every joyful greeting:

Legit thankful the internet is flocking to something nice this time.

And so far, it's racked up more than 8 MILLION views in just four days.

Those are "a cat and a gorilla are friends now" video-kind of numbers.

(Although, to be fair, those are some truly great videos.)

So now, let's go through Jen's video and highlight some of the cutest points.

We're ranking them from "Aww, pretty cute" to "Dear god I'm about to pass out right here the cute has taken my breath away."

First, we have this little bit, where Robert says "Hello Hen!" when he sees her.

Hen! He calls her hen! Is there a more adorable nickname? The only nickname my grandpa ever called me was "softmouth" because of how often I burn my mouth on soup.

And look at his little sweaters!

This guy should be coaching other grandpas on how to be cute.

The only thing he'll give you for Christmas is a lesson in discipline.

Then Robert shows off his playful side, asking Jen for a password.

I know this is Robert having a laugh, but it does spend the mind a'reeling — what did he do to make a living?

Is his excessive kindness a course-correction from a life spent as a CIA informant?

Is it possible that this teeny little sweetheart man has SEEN SOME SHIT?

And as this shot tells us, there is one pace of the puzzle missing...

Did you notice it too?

Is that a GRANDMA back there?

Is Grandma upset about Grandpa getting all this internet attention?

Here's the thing — Jen and Robert are from Scotland, a country you might remember from, among other things, Disney's Brave.

Their accents, coupled with how quick the video cuts around, can make it hard to understand sometimes what exactly Robert's saying.

But here's the OTHER thing — that doesn't matter.

There's a universal language of love being spoken here. You can hear it in his voice and read it in his face, even if it's not clear what exactly he's saying.

So why is Jen's video of her delightful granddad so resonant? Maybe it's because we've all had a granddad we love.

Or, at the very least, seen a granddad on TV we love.

And it's so easy to map the happiness on Robert's face onto our own granddad's face.

Would that EVERY grandpa could be this happy!

After Jen posted the video, the emotional Twitter responses...

I feel 'em welling up.

Could any grandpa ever be cuter than Robert?

I see you, Rockin' Out Granddad, but you ain't the king yet.

Jen really did something special this year by putting a smile on the faces of so many people.

It's a good reminder this holiday season to give your grandparents a hug if you can.

And maybe, in honor of all granddads everywhere, maybe consider learning how to wood carve?

It's actually pretty fun when you get into it! Okay, it's not NOT fun. It's just... fine. I could see getting into wood carving if you were born before you could stream movies on your phone.