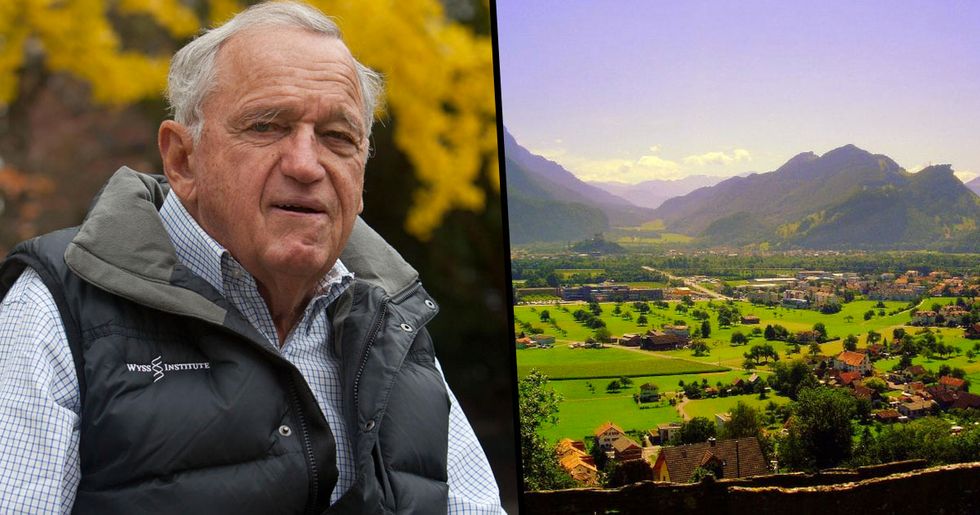 Swiss Billionaire Donates $1 Billion to Save the Planet

With over a billion dollars raised to help to reconstruct Notre-Dame Cathedral in a matter of days, some are asking, “but what about the planet?” It seems to many that the rapid response from the cathedral's billionaire benefactors is a harsh reminder that the super-rich could easily facilitate enormous global change for the better if they only tried, or indeed, cared.

Now, we're in no two minds about the fallacy of relying on billionaires to come along and solve all of our problems, but, on this rare occasion, one Swiss philanthropist named Hansjörg Wyss may have done exactly that. Wyss has pledged one billion dollars to help to preserve the planet’s wild lands and waters.

The project of the Wyss Foundation is both ambitious and well-minded. Keep reading to find out more about it and scroll to the bottom of the page to hear about ways that you can make a difference.

Regardless as to what the sceptics say, climate change is real and it’s going to destroy us if we don’t do something about it.

Here are some terrifying facts.

These are all, at once, all too real and all too daunting.

Since 1906, the global average surface temperature has increased somewhere between 1.1 to 1.6 degrees Fahrenheit.

And that’s discounting sea temperature, which is proving to be an even bigger problem.

We are now losing species at one-thousand to ten-thousand times the normal rate.

The Earth Day Network suggests that "We are amidst the largest period of species extinction in the last sixty million years. Normally, between one and five species will go extinct annually. However, scientists estimate that we are now losing species at one-thousand to ten-thousand times the normal rate, with multiple extinctions daily."

The ice caps are melting.

Both the mountain glaciers of Western Antarctica and the Arctic sea ice are melting at an alarming rate. We’ve all seen the images of the glaciers breaking apart and pictures of a sad polar bear on a single berg floating off into the distance.

The sea levels are rising.

The very worst are thriving.

Thanks to rising global temperatures, mosquitoes, ticks, jellyfish and crop pests are thriving and steadily moving further north.  These bring with them vector-borne diseases such as malaria and Zika virus.

The number of hurricanes and droughts are increasing.

According to National Geographic, "Hurricanes and other storms are likely to become stronger. Floods and droughts will become more common. Large parts of the U.S., for example, face a higher risk of decades-long "megadroughts" by 2100."

Less fresh water will be available.

Even the clouds are affected.

Nature, a scientific journal wrote, that an article published "reveal a previously unknown interaction between clouds and greenhouse gases: about three times the current level of atmospheric carbon dioxide can abruptly disperse clouds. [...] A world with fewer clouds, projections indicate, could witness up to 8ºC of warming in addition to that caused by greenhouse gases. Earth’s climate would be similar to conditions 50 million years ago, when crocodiles swam in an ice-free Arctic and palm trees grew as far north as Alaska."

So what does Hansjörg Wyss propose?

Well, money - essentially. But you can’t just throw money at an issue like this and expect it to go away, so this is what he’s proposing…

Wyss has formed the Wyss Foundation, which aims to protect natural areas over the next ten years.

A very small proportion of the Earth's natural land is protected. Wyss aims to change that. Business Insider revealed that "He aims to help conserve 30% of the Earth in a natural state by 2030."

And it's a good job because we’re losing animals fast.

Over the next fifty years, the earth will lose so many of its mammal species that it won’t recover for up to five million years and "The International Union for the Conservation of Nature predicts that 99.9% of critically endangered species and 67% of endangered species will be lost within the next one-hundred years."

Half of the earth needs to be protected.

In order to preserve the majority of plant and animal species.

How are we doing on that?

Well, currently "only 15% of the planet's lands and 7% of the oceans have been protected in a natural state."

So not so good.

Wyss has signed the Giving Pledge.

This is a pledge in which the most wealthy agree to give away half of their capitol to charity.

Something tells us that Bezos isn't likely to do the same.

Here’s what Wyss had to say…

"Every one of us — citizens, philanthropists, business and government leaders — should be troubled by the enormous gap between how little of our natural world is currently protected and how much should be protected… It is a gap that we must urgently narrow before our human footprint consumes the earth's remaining wild places."

Though we should be wary of leaving it all up to billionaires to solve the problem.

Charity is, by no means, everything. It's going to take radical, societal and political consensus and subsequent action.

How did Wyss make his money?

He’s the founder of Synthes, a company that manufactures medical devices, things like internal crews and plates for broken bones.

Backpacking, hiking and hobby aviation. Yeah, he’s a real outdoorsy guy.  He lives in Wyoming with his daughter, Amy.

So what can we do to help?

Not that much, honestly. While there are a few things that we can do, we should also be wary of insubstantial consumerist fallacies and corporate moralism.

But small changes really do matter. Here are some small things that you can do to help.

The first thing that you can do is…

Switch to a plant-based diet! The meat industry produces a tragic amount of greenhouse emissions. Although many may find switching to vegetarianism or veganism difficult, it can often be cheaper and, depending on where you live, much healthier to make the switch. And it's good for the planet. Maybe ease into it by trying to save meat-eating for weekends.

The second thing you can do is…

Fly less. Aviation is a serious contributor to CO2 emissions, and sustainable aviation is something that society will have to work out because people aren't going to give up on their vacations (and we don't blame them!).

There’s not a whole lot more you can do, lest a few small consumerist choices you can make.

Pay attention to how you're using water, buy from thrift shops and donate old clothes, buy reusable cotton pads and choose products that are cruelty free.

Okay, not everyone has access to a farmer’s market. But maybe you don’t have to eat avocados every day?

Refillable water bottles and reusable boxes and bags are good ways to ensure that less plastic finds its way out into our oceans and rivers.

If you can walk, then walk. Or take up cycling! It's good for you, too.

Tell your lawmakers how you feel. Write to them, visit them, urge them to make a positive change for the generations to come. Make them commit to protecting our world - we don’t get a second chance with this.

Do some research for yourself. We know it’s depressing, but it’s almost certainly the most pressing issue of our time, and knowledge is power, which we’ll need a lot of if we're going to make a change.

Let's save the planet, guys.