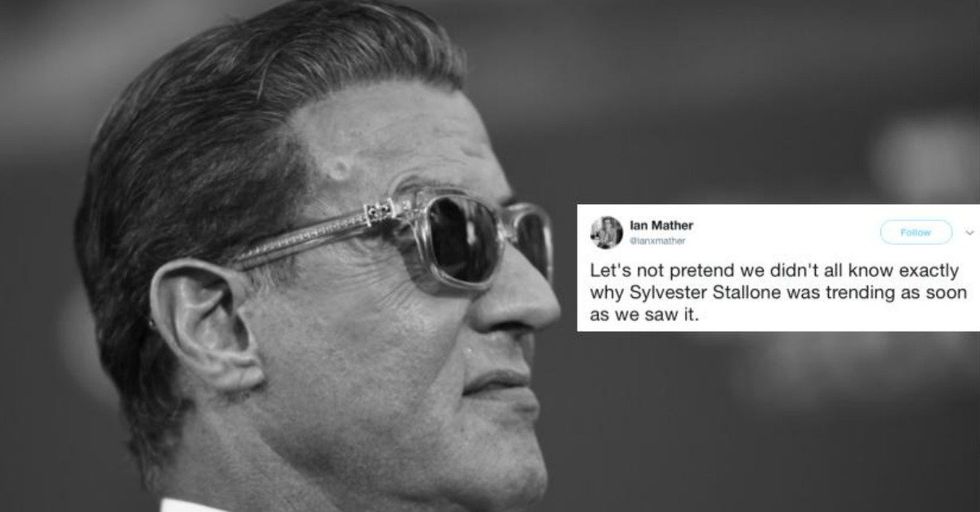 This Wednesday, reports surfaced that Stallone forced a teenaged girl to have sex with both him and his bodyguard in July 1986. The details are horrifying.

The Daily Mail obtained a police report dating back to July 1986, which was the month an unnamed 16-year-old girl said Stallone and his bodyguard assaulted her.

The girl was staying at the Las Vegas Hilton hotel with family friends for ten days, when she met actor David Mendenhall, who was playing Stallone's son in the movie Over The Top.

He offered to help her meet the actor and she accepted.

A few days later, the teen met Stallone, who was 40 at the time, and got his autograph. When she told him she was sixteen, he asked her "how she got such a build." This is according to the police report. One of the teen's friends got a kiss on the cheek from Stallone, so she asked for one too. Stallone then replied that "he would give her a kiss at a later date, that she would not forget."

The next day, the teen returned with a bigger picture so she could get an autograph for her friend.

That was when she met Stallone's bodyguard, then 27-year-old Michael "Mike" De Luca. He asked her what she would do if the actor made a pass at her, and when she said she would "probably make a pass back at him," he gave her keys to a room on the 27th floor.

That night, the teen met both Stallone and De Luca in the hallway and went into the room together.

She and Stallone began having sex while De Luca stayed in the bathroom. At some point, the actor asked her if she'd ever had sex with two men. When she replied she hadn't, he brought De Luca in.

From there, things took a turn for the worse.

The girl definitely did not want to have sex with both men.

According to the report, "she became very uncomfortable with the situation [once De Luca joined]. She states she did not want to have any type of sexual contact with the bodyguard, but felt she had no choice in the matter. She states there was no actual physical force, but she did feel intimidated."

Once they were done, Stallone then ejaculated in front of her.

According to the police report, the teen said "Stallone made the comment that they were both married men and that she could not tell anybody about the incident and if she did, that they would have to beat her head in." He and De Luca both laughed as they made this comment.

None of this would have come to light had a friend of the teen not called the hotel to ask for advice on the matter.

The head of the sexual assault unit at the time confirmed that the police report is indeed valid.

A year later, Stallone was accused by his half sister, Toni-Ann Filiti of sexually assaulting and raping her for years. Stallone settled with her for a $2 million dollar lump sum, plus $16,666 a month for the rest of her life, though court documents show he "vigorously denied and continues to deny and dispute all claims of wrongdoing."

Filiti died in 2012 after a battle with lung cancer. De Luca died in 2013 when he was shot and killed at a traffic stop.

Given what we've learned about sex assault in the few months since the Harvey Weinstein scandal first erupted, we're going to wait and see what else comes to light, although, here is something particularly telling: Doug Popper of the Baltimore Post-Examiner wrote a story in 1986 about Sylvester Stallone possibly sexually assaulting a minor in a Las Vegas hotel.

The actor has denied the charges.

In a statement to Fox News, his spokesperson said, "This is a ridiculous, categorically false story. No one was ever aware of this story until it was published today, including Mr. Stallone. At no time was Mr. Stallone ever contacted by authorities or anyone else regarding this matter."