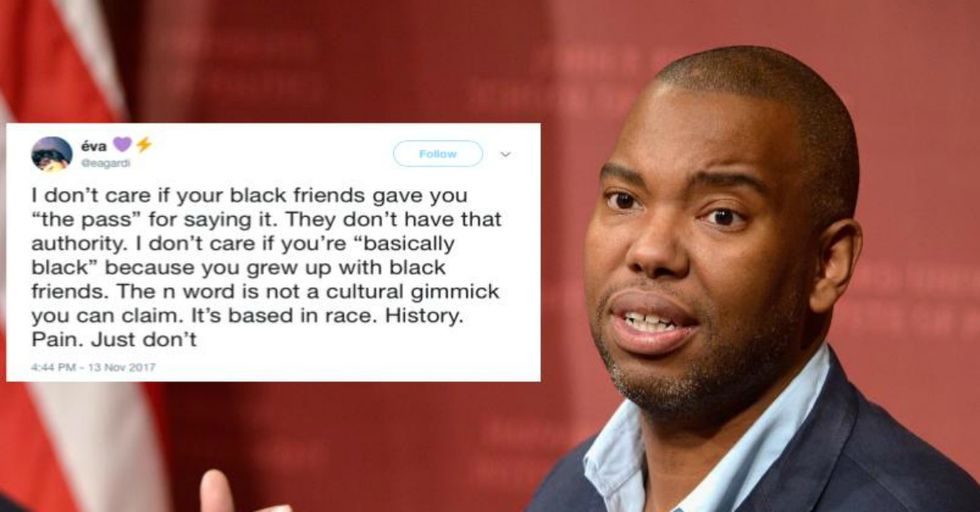 Ta-Nehisi Coates is the internet's new favorite intellectual. After the Atlantic national correspondent burst onto the scene with his book Between the World and Me, Coates has been consistently asked to answer questions on race, class, and gender.

During a stop last month at Evanston Township High School in Illinois for his newest book, We Were Eight Years In Power, the author was asked by a student why white people shouldn't use the n-word, even when singing along to rap songs that use the word.

The student's question came in the wake of a Lil Uzi Berg concert at Northwestern.

During the concert, the student said, the rapper Lil Uzi Berg used the N-word "profusely," so why couldn't the white people who'd listened to the concert? While the student did not support other white people using the word, she wondered how to explain exactly why.

Coates' answer was revelatory, and was perhaps the clearest explanation we've ever heard on the subject.

The reason white people can't use the N-word, Coates said, is because of the context. He cited, as an example, his wife's use of the word "honey" in reference to him. It was okay if she said it because she was his wife, but if a strange woman said it – not okay. In fact, it might even cause problems because why would a strange woman want to call him honey?

Coates then went one further by giving an example of two sensitive words – B**** and F****.

Both words have negative connotations, but can be used positively in the communities they respectively refer to. Coates' wife calls her friends B**** and TV show runner Dan Savage wanted to use the F***** in a title for one of his shows. While it's okay for Coates' wife to call her friends the B-word or, for Savage, who is a gay man, to call his show the F-word, it's not okay for Coates to do so, nor does he have the desire.

And this is an important point Coates makes in his argument – why do white people have a desire to transgress social norms?

He gives another example of this by citing a friend of his, who used to have a cabin upstate he termed the "white trash cabin." "I would never refer to that cabin" like that, Coates said. "I would never tell him, ‘I’m coming to your white trash cabin.’" As Coates reiterates, certain words are reserved for certain circumstances among certain people. This is part of the social contract.

The question then, is “why so many white people have difficulty extending things that are basic laws of how human beings interact to black people?"

Coates had an answer for this:

When you’re white in this country, you’re taught that everything belongs to you. You think you have a right to everything. … You’re conditioned this way. It’s not because your hair is a texture or your skin is light. It’s the fact that the laws and the culture tell you this. You have a right to go where you want to go, do what you want to do, be however — and people just got to accommodate themselves to you.

Coates continued by referring to the history of the N-word.

So here comes this word that you feel like you invented. And now somebody will tell you how to use the word that you invented. ‘Why can’t I use it? Everyone else gets to use it. You know what? That’s racism that I don’t get to use it. You know, that’s racist against me. You know, I have to inconvenience myself and hear this song and I can’t sing along. How come I can’t sing along?’

But, in the end, Coates offered a glimmer - if not of hope, then of understanding.

The experience of being a hip-hop fan and not being able to use the word ‘ni**er’ is actually very, very insightful. It will give you just a little peek into the world of what it means to be black. Because to be black is to walk through the world and watch people doing things that you cannot do, that you can’t join in and do. So I think there’s actually a lot to be learned from refraining.