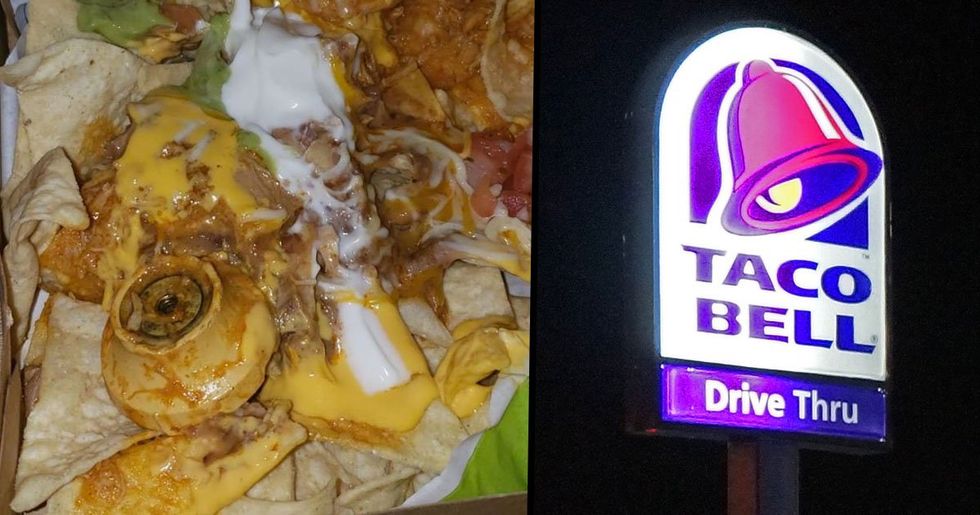 Knock-knock jokes and male genitalia gags aside, no-one likes having their lunch spoiled.

The most common mishap for Mexican fast-food giant... Wait, is it really Mexican? Nope, it was founded in Cali... maybe you already knew that... okay, so the most common mishap for Californian Mexican style fast-food giant, Taco Bell, is mixing up the bean burrito filling with the beef - vegetarians go crazy over that stuff! I can understand that, though; refried beans sure look a lot like the mushy mince stuff that they serve in Taco Bell, especially when they're both covered in that lovely cheesy sauce - I'll admit it, I'm a sucker for that; it's just so darn good. If I ever get sick or old or both and have to be fed through a tube, get down to Taco Bell and get me a big hot vat of their cheesy sauce - sure it'll clog my arteries and probably cut my life expectancy in half, but eh - we've gotta go sometime, and what a way to go!

Anyway, let's find out how a doorknob ended up in someone's nachos...

I don't know if it's just the Bob Dylan song rattling around my head, but there's something perhaps a little ominous about finding a doorknob in your food - or, rather, a doorknob finding you, if you hear what I'm saying.

A message from another dimension?

If you're somebody that that believes in signs and superstition and all that jazz, finding a doorknob could mean a whole bunch of things. Maybe it doesn't even mean that you're nearing Heaven's door, maybe it means that a new door of opportunity is heading your way.

Maybe it was telling her to close a door?

Don't go back to that ex of yours, girl, you better shut that door and lock it tight.

Whatever your doorknob's telling you, I guess you probably don't want it to interrupt your dinner.

Sadly, for one Taco Bell consumer, interrupt her dinner is exactly what this doorknob did. Eve Saint (see, the religious angle makes sense!) from Poughkeepsie celebrated July 4th with a Taco Bell this year. Nothing quite says Independence Day like an American brand Mexican fast-food meal.

According to Eve, who posted about the ordeal on Facebook, she had to wait forty-five minutes in the Drive-Thru for her meal. I mean, alright, that it is a pretty long wait, but I'd argue that anyone who's worked in fast-food will appreciate that a national holiday like Independence Day is going to inevitably mean delays on food. If Saint had gone into the joint, rather than sulk in her car, she might have realized how many people were ordering from the branch that evening.

But. hey-ho, the customer's always right...

Right? Well, when Eve Saint discovered the doorknob in her Taco Bell nachos, she took to Facebook to confront the nasties who had played such a cruel trick on her, only to get dismissed by the fast-food giant.

"TACO BELL IM COMING TO F*CK SOMEONE UP."

Maybe a little heavy-handed on her keyboard, Eve was clearly not pleased when she took to Facebook to address her issue with Taco Bell. She wrote: "TACO BELL IM COMING TO FUCK SOMEONE UP REAL FUNNY PUTTING A FUCKING DOOR KNOB IN MY NACHOS BITCH."

Not prepared to wait for a Taco Bell customer service bot to respond...

Eve called up the branch wanting answers. "Hello Taco Bell, I have some issues with the Nacho Supreme..."

She apparently had to call a further 10 times until she got through to someone. Again, I'd like to remind everyone that July 4th is a national holiday and that fast-food restaurants don't employ someone to man the phone, so my guess is that they were too busy to hold the line.

Can you imagine the scene in the Taco Bell...

"Hey, Boss..." "Tommy, why have you left the fryer? There are people eating from the goddam hot sauce sachets, they've been waiting so long!" "That lady is on the phone again..." "What? What does she want?" "Something about a knob, or a doorknob, or... I'm not sure, she's not very happy." "Jesus, Tommy, hang up the phone and get back to work." "Okay. Hey, do you think I could finish at nine? Mom's left a plate out for me." "Remember, I'm not your step-dad in here Tommy, I'm your boss. No one's leaving until this place straightens up." "Okay, sorry."

Of course, for Eve sitting at home, it was a different story...

Pacing her kitchen tiles, her soggy nachos sprawled out on the cleanest countertop with the best lighting for her Facebook photo opportunity, she calls the branch for the tenth time. Finally, this time, she got through.

At first, Taco Bell thought that she was lying.

I mean it's a bit far fetched, right? But after either describing the doorknob or showing them the picture, Taco Bell worked out what had happened.

Eve took the story to The Hudson Valley Post.

Speaking to the paper about what happened when she finally got through to Taco Bell, she explained: "I found out its the pump of a cheese dispenser. They hung up on me and told me I was lying then offered me a free nachos."

So it was a cheese dispenser pump all along!

I mean, that makes more sense than an ominous gift from the gods telling Eve to close that door to her past relationship... I guess whoever the poor kid was whose job it was to man the cheese dispenser that night was flying through so many orders that they must have been pumping that pump real hard. So hard that it fell off and landed in Eve's nachos.

What did Taco Bell have to say?

In a statement given to Hudson Valley Post, Taco Bell said: "We take this very seriously. The franchisee that owns and operates this location is looking into this matter and strives to make things right with the customer." So I'm guessing that Eve got some free nachos and some churros or something. ... If you were to look at it another way, Eve got a free gift with her meal! - collect all 4 components to make your own Taco Bell cheese dispenser at home! Now that's a campaign that I'd get behind.