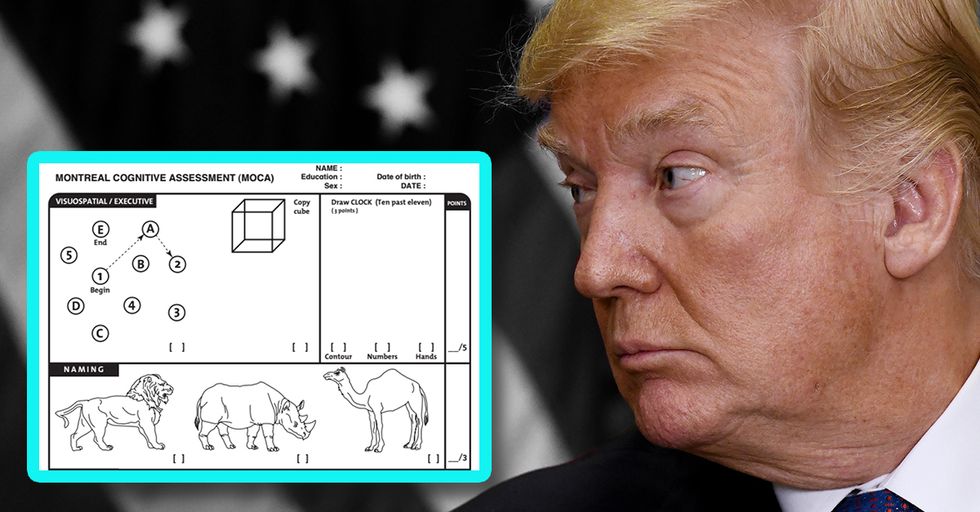 For some reason, a lot of people have called President Trump's mental health into question. I couldn't begin to guess why.

It can't have anything to do with his apparent inability to hold a bottle of water, speak without slurring, or refrain from saying a bunch of racist stuff (while also operating under the delusion that he's not racist)...

Oh, wait. It probably has a lot to do with those things, actually.

Dr. Ronny Jackson, who was in charge of the examination, determined that the president's overall health is "excellent." He also said that Trump specifically asked him to perform a cognitive assessment — presumably to prove that he's actually the "stable genius" he claimed to be. (You know, like a stable genius would do.) Dr. Jackson did carry out the cognitive assessment, which Trump passed with flying colors, scoring a 30 out of 30 possible points. Here's the actual test Trump took. See how you do!

The test is called the Montreal Cognitive Assesment (also known as MoCA). It's used to test for "mild cognitive dysfunction" and, according to Dr. Jackson, rules out the need to perform any other cognitive tests. Here's the first task:

Draw a line between a number and letter in ascending order (i.e., from 1 to A, to 2, to B, etc.). If you're able to complete this task, you get one point. Easy peasy, right?

Next, copy this cube:

According to the test instructions, you only get a point if the drawing is 3-dimensional, all the lines are drawn, there aren't any extra lines, and the lines are relatively parallel and of equal length.

Next, patients are asked to draw a clock showing a specific time (in this case, ten past 11).

(No, digital clocks don't count.) You get one point if each of the following criteria are met: Roman numerals are acceptable, but using them means you're kind of a show-off. (That's not in the test instructions. I'm editorializing.)

The test then moves on to the naming category. See these animals?

You get a point for naming each one. The accepted answers are as follows (no cheating, though!): How are you feeling? How's your brain feeling? Ready for more? Then let's move on to the Memory portion...

For this portion of the test, you have to repeat words after they're read to you. Here are the words: Face, Velvet, Church, Daisy Red.

Now for the "Attention" section:

First, repeat the numbers in the first row in order. Then, repeat the numbers in the second row. You get two points if you do both tasks correctly. Then you have to tap your hand every time you hear the letter 'A' in a sequence of letters. You only get a point if you have fewer than two errors. The last task in this section requires you to count back from 100 by 7's. You can get 3 points if you make at least 4 correct subtractions. (Honestly, this is the section that strikes me as the most difficult. I'm not sure I'd be able to get full points here. But I'm also not the president, so...)

Test participants have to correctly repeat the two sentences listed here. (Each is worth one point). Then, name as many words as you can that begin with the letter F in 60 seconds. You get one point if you can name at least 11 words.

Next, name what the objects in the following pairs have in common: Train and bicycle Watch and ruler (Acceptable answers are that the train and bike are means of transportation and that the watch and ruler are used to measure.) Remember those five words from earlier? How many of them can you recall now? You get a point for each one you can remember. For the last task, say the current date (including year, month, date, and day of the week), the place you're currently located, and the city you are in. Each correct answer is worth a point.

(P.S. You get a bonus point if you received 12 years or fewer of formal education.) How'd you do? If you scored 26 or higher, you're in the clear! Maybe you should also consider running for President! (But please don't be as racist as the guy who currently has the job.)