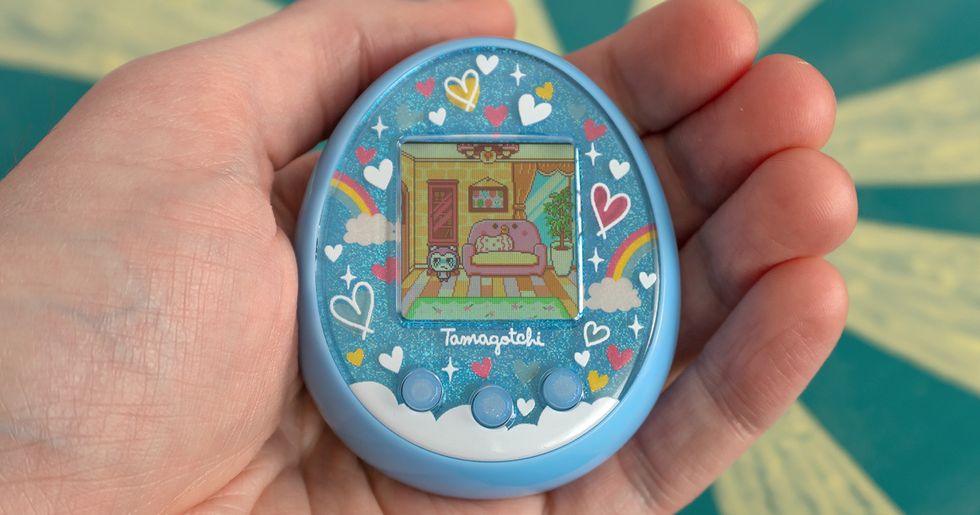 Tamagotchis Are Back and They're Better Than Ever

The '90s were a time of choker necklaces, Nickelodeon magazines, and JNCO jeans. Even though so many things about the '90s seem dated to us now in 2019, there's a ton of stuff making a comeback. For instance, '90s fashion is incredibly popular right now. Just browse through any popular fashion website and you'll see entire sections dedicated to '90s looks like cropped baby tees and jean skirts.

But besides boy bands and bizarre fashion, the best part about growing up in the '90s was the toys. If you were a '90s kid, there were a plethora of strange and addicting games to play, ranging from pogs to "Guess Who?"

Perhaps the most popular of the '90s era toys was the beloved Tamagotchi - a little digital egg-shaped gadget that allowed you to care for a pet. If you are missing your old Tamagotchi, don't fret! Because Tamagotchis are coming back and this time they have a serious upgrade.

Keep reading to find out how to buy a new and improved Tamagotchi and what you can do with them.

If you were a '90s kid, there's a huge chance that you were obsessed with your Tamagotchi. I remember all of my teachers were furious when the class would sneakily take care of our Tamagotchis. They just didn't understand!

Just thinking about a Tamagotchi and its little egg-like shape makes me all sorts of nostalgic. They were the best toys ever.

Tamagotchis are hand-held digital pets. They were created in Japan by the toy company, Bandai.

Tamagotchis were invented by Aki Maita, a Bandai developer.

The point of a Tamagotchi is to take care of your pet. When you have a Tamagotchi, you raise your My Tama from the time it's born until it's grown.

Tamagotchis were so addicting. I remember being obsessed with making sure My Tama was living a good life.

Life of a pet

The cool thing about playing with a Tamagotchi is that it goes through different life cycles. It's pretty much like raising a baby.

If you don't take care of your Tamagotchi, your pet will "die." This is very tragic and should be avoided at all costs. You want your pet to grow and thrive and live their best life.

Wow, this is deep. I can totally see someone using Tamagotchis as a metaphor for life.

The cool kids always had a bunch of different Tamagotchis. I was always so jealous. This is bringing me right back to middle school.

A Tamagotchi pet will grow through the following life stages: baby, child, teen, and adult. I'm shedding a tear thinking about how they grow up so fast.

Pets can also die of old age, having lived a good life. Is anybody else feeling suddenly emotional? Tamagotchis teach kids about the circle of life.

Tamagotchis also became video games. If you were really addicted to playing on your Tamagotchi, this was great news for you.

Tamagotchi games became available for Nintendo, Game Boy, Wii, and PlayStation consoles. Who wants to have a Tamagotchi party?

It was always so emotional when you lost a pet. Honestly? It was extremely tragic! The horror of losing your My Tama could stay with you for weeks.

My Tamas are incredibly needy. They're like real pets! You can't neglect them.

I totally understand this tweet. The desperation is real. Sometimes you have to just pay for shipping and pray for the best.

J.K. Rowling has some explaining to do. Transfiguration would've been a lot harder if all of the students were playing with Tamagotchis.

I called my gf at 1am but I had to wait at least a full minute before I could talk to her because she was crying about tamagotchis
— Cuteosphere (@Cuteosphere)1557188467.0

Find you someone who lets you cry on the phone about the demise of their Tamagotchis. That's real love.

Tamagotchis became super popular in the '90s, but people have continued to play them for all these years. They've had a bunch of different releases.

This tweet speaks to my soul. The love of Tamagotchi is a fire that is hard to extinguish.

This honestly seems like a pick-up line that would work.

These are so cute I want to cry. Why does everything related to Tamagotchis make me want to weep?

Here's the good news: Tamagotchis are officially coming back in a big way.

Get ready to spend all of your money, because you're about to be able to purchase a modern, improved Tamagotchi.

Introducing the Tamagotchi On

Bandai announced that they're releasing a new Tamagotchi, the Tamagotchi On. The new Tamagotchis will be available in "Fairy Pink, "Fairy Blue," "Magic Purple," and "Magic Green." They're insanely cute.

The new version is pretty much the same, but there are a few new, exciting features like seasonal events and games. You can also now earn "Gotchi Points." According to Bandai, your My Tama will look like a combination of their mother and father and be totally personalized. Tamagotchi On screens will also now be colored-digital screens.

Perhaps the most exciting new feature of the Tamagotchi On is the fact that you'll be able to link up to other players. You'll be able to give each other gifts, set up playdates, travel, and even marry one another.