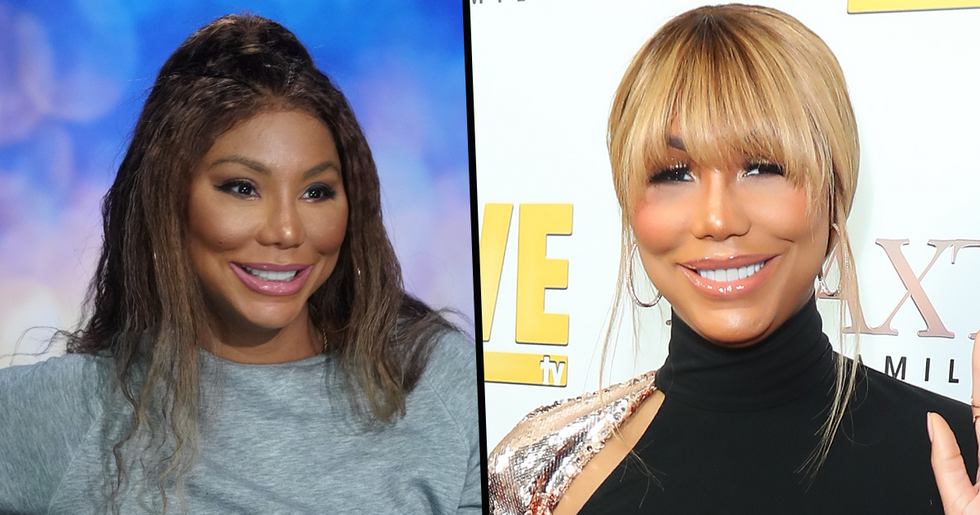 R&B singer and actress Tamar Braxton is currently in hospital after a 911 caller claimed she tried to commit suicide in a Los Angeles hotel...

We all know and love Tamar Braxton for her career as a singer and actress.

Born in 1977, Tamar was raised in Maryland and she has been singing since she was a toddler.

As a child, Tamar and her 5 siblings would sing in their church choir where their father worked as a pastor.

She and her sisters Toni, Traci, Towanda, and Trina, signed their first record deal with Arista Records in 1989.

The sisters became known as The Braxtons...

Things didn't run smoothly for the girl band, however.

In 1991, during a showcase with L.A. Reid and Kenneth "Babyface" Edmonds, who was in the process of forming LaFace Records, Toni Braxton, minus her 4 sisters, was chosen and signed as the label's first female solo artist.

After Toni's departure from the group...

The rest of the band became back-up singers for her first tour, music video, and promotional appearances.

As the years passed, the sisters started to pursue their own solo careers...

The Braxtons officially parted ways in 1998, with Tamar going on to record her solo debut album, Ridiculous.

She went on to release some iconic R&B tracks...

Including "Get None", that was produced by Jermaine "J.D." Dupri, "If You Don't Wanna Love Me", and "He Wasn't Man Enough."

In 2011, Tamar, her sisters, and her mom signed a deal for their own reality show.

Braxton Family Values first aired in April 2011 and in December of that year, it was confirmed that Tamar and her husband Vincent would star in their own reality series centered on her solo career and their married life.

The reality was, and continues to be, a huge success...

And alongside filming for the reality show, Tamar also worked as the co-host of the syndicated daytime talk show The Real alongside Adrienne Bailon, Loni Love, Jeannie Mai, and Tamera Mowry in 2013.

Up until today, the singer has continued to release more and more music...

And her most recent single, "Crazy Kind of Love" was a huge success.

She is clearly a woman of many talents...

And her personality as a television host has gained her a huge fan-base worldwide.

She is also a devoted mom...

Her son, Logan, was born in 2013 and it's clear how much this little boy means to the singer.

But despite her happy family life, global following, and overall success...

It seems that the singer has been facing some of her own demons recently.

And concerns were sparked for someone staying at the Ritz Carlton hotel.

That person in question was Tamar...

And according to TMZ, she was found unconscious in her hotel room by police officers.

Her boyfriend, David Adefeso, told the police that she may have overdosed on pills and alcohol...

And sources say that David explained that the pair had fought earlier in that day and she had threatened suicide.

Tamar was rushed to the hospital...

And her condition is currently unknown.

This is such a worrying time for the singer...

As there is no way of telling if she will pull through or not.

Fans have been sending in messages of love for Tamar...

And it's clear that so many people are praying for her right now.

It just goes to show how mental health illnesses are invisible...

And you can never truly know what is going on inside a person's head - regardless of how happy they may look.

Tamar must have been feeling a considerable amount of pain...

Which is something nobody should ever have to go through.

Tamar will need more than just prayers to battle her mental health illness.

Our thoughts go out to Tamar and her family and we hope she makes a quick recovery soon. Read on to find out about Conchata Ferrell's current condition in intensive care after falling ill with an infection...