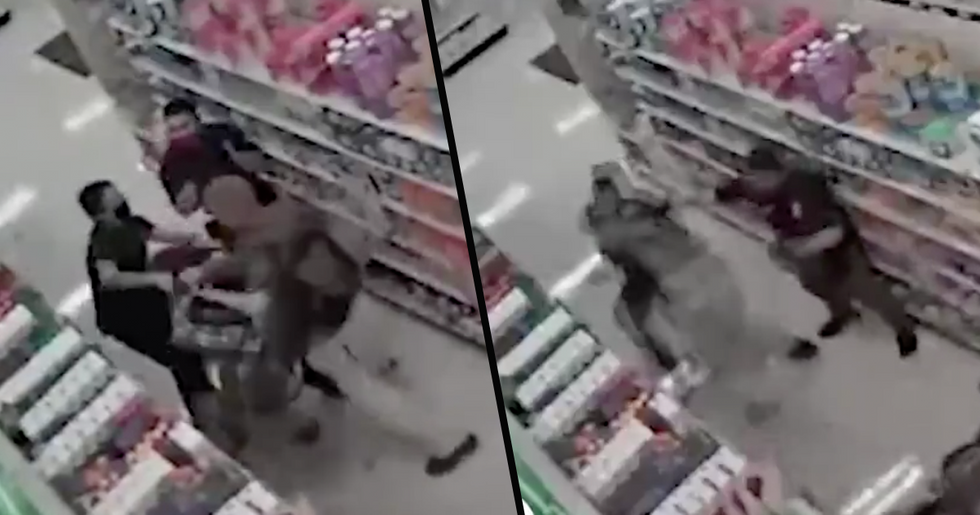 Stricter measures have been put in place by all stores across the country, but some people still don't understand why they have to stick to the rules, even after so many people have died...

The latest video to go viral shows the lengths some people will go to avoid keeping those around them safe.

The footage is shocking...

It's May 2020, and the demand for basic groceries is still higher than ever.

With the deadly virus still sweeping across the planet, millions have descended into mass hysteria - And have been frantically stocking up on basics such as toilet paper and dried pasta.

And, while most are calmly self-isolating at home, many have been taking to their local supermarkets to stockpile on supplies. I thought we learned from that mistake?

Things have already gotten out of hand...

Because the shelves are being emptied at such a fast pace, it has become impossible for the vulnerable to grab what they need.

People must take the utmost care when being around this type of food for hygiene purposes.

This is why stores have been placing stricter measures on their customers.

One Family Dollar store in Flint, Michigan decided that all their customers must wear masks while shopping in the premises.

It is not much to ask given the current circumstances...

We care about your health and safety. We are closing our stores earlier each evening to exercise new proactive clea… https://t.co/gE7Fg2iAYL
— Family Dollar (@Family Dollar)1585767688.0

However, some people have taken this safety precaution as a personal attack and it has led to fatal consequences.

As you know, wearing masks has been recommended for everyone leaving their house to buy essentials.

While they may not be the most comfortable thing in the world, there are far worse things that you could be made to wear.

I mean just think about the healthcare workers that have to spend twelve-hour shifts in the things. Now it doesn't seem so bad, does it?

Although a mask is preferable, as long as you have some form of cover over your nose and mouth, it's acceptable. Although not everyone is psyched about having to wear it.

Although stores have put these policies in place to protect customers' and employees' safety.

Two suspects who waltzed into a Target store didn't seem to get the memo. After being told they needed to leave due to their lack of protection, they attacked an employee leaving him badly injured.

This all broke out while the 2 suspects were being escorted out of the store after refusing to put masks on.

Luckily for the employee, the whole incident was all caught on tape.

What the police reported was horrendous...

@LenaPlummer2 @ABC7 Our Wal-mart had to stop limiting sales of toilet paper and other items due to store employees… https://t.co/DQWXE5HISf
— Father Fanboy (@Father Fanboy)1589307954.0

“As they approached the exit, one suspect, suddenly without provocation, turned and punched a store employee, causing him and the suspect to fall to the floor," the police report said. “While on the ground, the store employee broke his left arm. A fight erupted between the two suspects and store employees."

The 2 suspects have been reported to be brothers. "Los Angeles Fire Department paramedics transported the store employee to a local hospital and [he] was treated for his injuries, the two suspects were shortly arrested on the same day for Felony Battery and their bail was set at $50,000."

The pair were identified as thirty-one-year-old Phillip Hamilton and twenty-nine-year-old Paul Hamilton.

For some strange reason, the mask laws seem to put a lot of people on edge, resulting in people blaming employees who aren’t the ones making the rules.

It has been reported that the employee was left with a broken left arm.

After the video went viral, Target corporate staff responded by saying: “The safety and security of our guests and team members is our top priority."

Luckily it was only his arm...

This incident happened on the same day Calvin ‘Duper’ Munerlyn was shot and killed in a similar altercation over a mask.

It's sad to think the people who are keeping the country running are the ones being targeted.

These rules are only in place to try to lessen the spread of the virus. Even though places are starting to re-open, that doesn't mean the risks have gone.

It's not just about trying to avoid getting sick anymore...

It's also to prevent our hospitals from overcrowding. People could still be carrying the virus without showing symptoms, so these measures are essential to stop the virus spreading.

And in reality, we haven't really been in lockdown that long.

So these are just methods of precaution that are meant to help our whole community.

Watch the horrifying video below...

It's actions like this that are making retail employees even more fearful of doing the jobs we depend on them to do. Keep scrolling for the heartbreaking story of the security guard that was killed for trying to keep people safe...