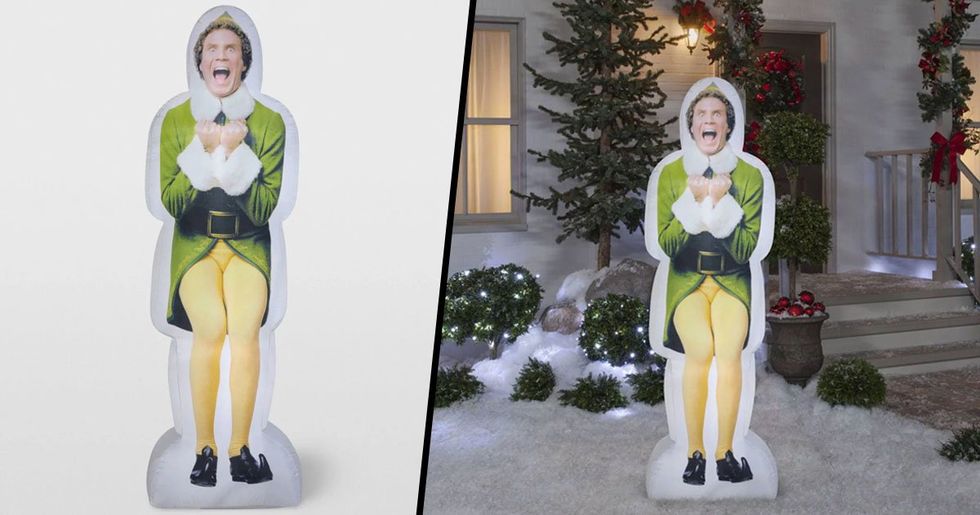 Target Is Selling Giant Inflatable Buddy the Elf for Christmas

I noticed the first slither of frost as I cycled to work this morning. I guess it's about time I put my sandals away and invested in a pair of snow boots. So, even though it's only the first of October, after you've read this article (obviously), I release you to go deck the halls and all that.

But, first, you should read all about the best decorations available to you right now at Target... including the Inflatable Buddy the Elf.

Credit cards were invented for Christmas.

I mean, it's totally not our fault that we want to buy so much for the holiday season. It's cold outside and that George Michael song keeps playing on the radio, making me feel blue! So I'm going to buy Christmas cards for every person that's ever broken my heart... and they're on sale in Target so I may as well bulk buy for next year.

"Hey, I can pull off an elf sweater in October, right?"

And reindeer antlers? I mean, reindeers do exist throughout the year, you know? Don't be so prejudice.

Christmas is as much for adults as it is for kids.

Sure, we have to buy everything ourselves, there's no Santa squeezing down our chimney, and we'll be lucky to get a few days off work... but, my friends, Christmas is still a magical time.

Christmas cheer is what you make it.

If you struggle to get into the Christmas spirit, I recommend you do a Zooey Deschanel What's a Zooey Deschanel, you ask? Well, if you've seen Elf, you'll remember that her character, whatshername, didn't have much Christmas cheer, but, after working as an elf in the department store with Will Ferrell, all of that changed. Heck, that girl got so into Christmas that she ended up moving to the North Pole. I'm not saying that you should go get a Christmas themed job, but I would recommend getting the fetching elf costume from Target.

Kitting yourself out all Christmasy won't cost the Earth, either.

The women's full elf costume with all the trimmings will set you back a measly forty dollars.

A good quality beard is vital to keeping Santa alive.

If you've got kids that are approaching the age of skepticism, then you better get down to Target. For fifteen dollars you can ensure that your little angels believe in Santa for a little longer. My mom and dad did a double bluff by filming proof of Santa dropping off our presents. Naturally, the first thing out of my skeptical mouth was "it's obviously daddy" - but dad was holding the camera... stunned, I believed that the man in the red suit was real for another year. It was only much later I realized that it was my mom that had donned the beard. Classic tomfoolery!

The pressure on parents to get their kids what they want is a real struggle.

For one thing, kids change their minds all the time. Last week they wanted a pretend kitchen, this week they want an electric guitar... it can be very confusing. All kids love potato crisps though, right?

What is it you ask? Well, it's called The Blume Doll and, from what I gather, kids are going crazy for these things. Maybe it has something to do with that eco-anxiety that all the kids are supposed to be suffering from? This doll-crossed-with-a-plant is a strange nature-meets-plastic-doll-toy that only seems to make sense in 2019. As trash as it looks, at least they're cheap. You can pick one up in Target for $9.95. And, eh, as Arnold Swaznegger would say... if it's what the kid wants, eh?

The other hot toy that's going to fly off the shelves this Chrimbo is this...

A dumb bear? Wrong my friend... this is a Cubby.  This interactive plush toy is quite a piece of technological marvel.

You'll never have to interact with your kid again!

Although this robot bear will set you back $97.99 in Target (much more elsewhere...), with over one hundred interactive moves under its belt, this toy is like a robot babysitter. Ideal!

Now I have issues with this one... I do not like the snobby vibe of this Mensa approved toy. Artie 3000 The Coding Robot is basically a glorified stencil drawing machine. This isn't new technology, heck, my mom had something like this when she was a kid. I mean, obviously, it didn't look like this - but it didn't cost sixty-odd dollars.

Way more interactive, hands-on, and a fraction of the price! This stencil drawing set only costs $10.39 and your kids can decorate the whole neighborhood!

Can you remember what the hottest toy in 2009 was?

I know, it was a decade ago, but isn't it interesting to remember what was the most popular toy back then? According to the internet, that year, all any kid wanted was a zhu-zhu hamster robot toy. Remember these bad boys? They didn't do very much, but neither does a regular hamster! They're still available in Target and they've even undergone a funky new design. My favorite is Peanut, and he's on clearance! For only $9.09, you can get your kid the hottest toy of 2009!

Decorating the outside of your house is going to take some planning.

It's a good job that we're only in October! You've got plenty of time to make your front yard a winter wonderland.

With the right tools, decorating can be easy.

Some people think that they don't have time to decorate the house and make it that magical Christmas wonderland we all dream of... But those people are wrong! Target has plenty of quick and easy to put up decorations that will make your house stand out with Christmas cheer!

Remember Elf on The Shelf?

Well, that pesky little elf if making a comeback this year. In an adorable outdoor inflatable design, you can show off to your neighbors with this novel decoration. They're selling them in Target now for just forty dollars.

Is there a Grinch in your family?

Not everyone loves Christmas... why not pay homage to the Christmas-phobic fellow in your life by getting an easy-to-put-up, inflatable Grinch doll for your front yard. This cute 4ft guy is priced at a cent under forty dollars.

But there's one Christmas inflatable that everyone is already going crazy for...

No, not Santa, heck, there's loads of those still in stock! This inflatable has been so popular with Target consumers that it's already sold out! I mean... once you see it, you'll understand why.

You'd be the talk of the neighborhood!

In a good way... obviously. This photorealistic lifesized Buddy The Elf outdoor inflatable truly is wicked. And, although it is currently sold out on Target's website, we expect that there will be more available very soon.

We'll just have to be patient...

The fifty-dollar life-size inflatable Buddy The Elf was bound to be popular, so keep your eyes peeled. If that means going to your local Target every day for the next two months, so be it. Continue scrolling if you want read all about the super cute mini haunted houses that Target is currently stocking. Better get in there quick before Halloween has well and truly sped by!