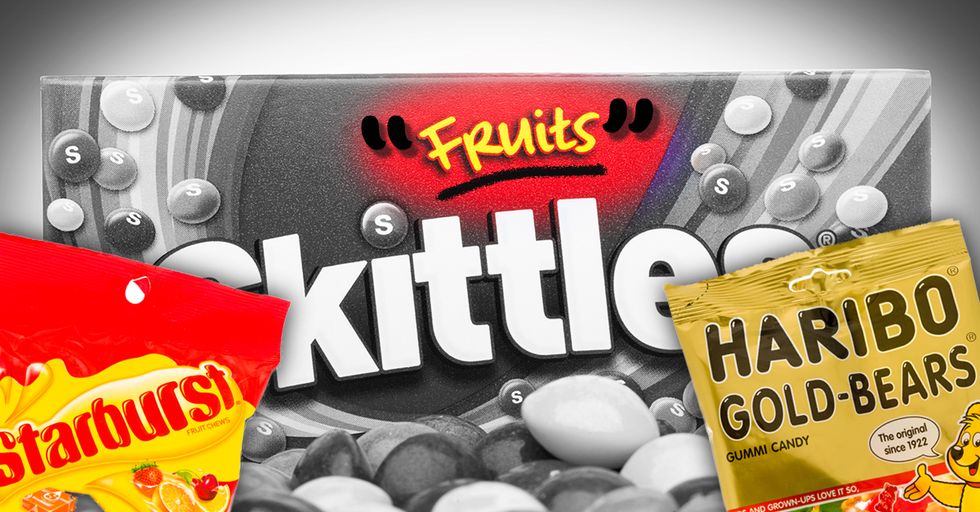 Everything You Thought You Knew About Skittles Flavors Is a Lie

RED ALERT: ORANGE ALERT: YELLOW ALERT: GREEN ALERT: PURPLE ALERT: "Taste the rainbow!" is a lie. We are living in a made-up dimension of our own creation. Skittles all taste the same.

Yeah, you heard that right. The scientists at Skittles, Inc. (definitely the real company behind Skittles) are messing with our brains.

This begs the question: What other gummy candies are we being betrayed by? Are Mike and Ike actually our mortal enemies? NPR has the scoop. Get ready for your mind to be blown to bits.

This whole thing began because NPR reporter Ashlie Stevens got into a discussion about gummy bears with her coworkers.

One evil person, digital editor Jonese Franklin dared to question the genuine nature of gummy bear flavors, asking, "Do gummy bears really come in different flavors, or do we just think they taste different because they are different colors?" Stevens decided to investigate.

Now, we all know there are some colorful confections that all taste the same, like Froot Loops and M&M's.

That's just common knowledge. Obviously, that doesn't stop us from having our favorite M&M color (yellow for me) and Froot Loop color (yellow again — it's my favorite color).

Uh oh — did you not know all Froot Loops taste the same?

I'm truly sorry. This is on par with ruining Santa Claus for innocent children. But you might as well buck up because there are going to be much more disturbing revelations that come to light in this article.

It probably won't come as a surprise that our senses work together.

You ever have a cold and can't taste what are normally tasty treats? That's because our sense of smell has a much larger effect on our sense of taste than you might assume.

Stevens spoke to Don Katz, a Brandeis University neuropsychologist, who told her about an experiment involving fruit-flavored drinks.

"I have a colleague in the U.K., Charles Spence, who did the most wonderful experiment," Katz said. "He took normal college students and gave them a row of clear beverages in clear glass bottles. The beverages had fruit flavorings. One was orange, one was grape, apple, lemon." When the liquid was clear, the students did a great job at identifying the different flavors. "But then he added food coloring," Katz said. "The 'wrong' food coloring for the liquid." (For example, the grape-flavored liquid would be colored orange.) "While I wouldn't say they went to chance, their ability to tell which was which got really subpar all of the sudden," Katz says. "The orange beverage tasted orange [to them]. The yellow beverage tasted like lemonade. There wasn't a thing they could do about it." Apparently, this is almost exactly what's happening to us with Skittles...

Spence proved that color can impact our perception of flavor, even though there are a lot of factors at work here and a lot of questions still on the table.

But, Katz said, the fact that our other senses can affect what we taste is a well-known phenomenon to many candy companies, and they use that to their advantage.

"The Skittles people," Katz said, "being much smarter than most of us, recognized that it is cheaper to make things smell and look different than it is to make them actually taste different. So, Skittles have different fragrances and different colors — but then all taste exactly the same."

We'll pause while you collect yourself. We know this is big news.

According to Stevens, "Katz says this works because our brains are used to processing certain sensory cues together. For example, our brains associate the color yellow, a lemon smell, and a slightly acidic taste with each other. When you're offered two of these three sensory cues, your brain will fill in the blanks."

I hate to be this person, but it kind of makes sense when you think about it.

When you choose a lemon Skittle or a grape Skittle, it's definitely fragrant and "tastes" like the specific fruit. But once you chew it down to a little sugary nub, it's just kind of generically sweet. Right?

OK, Skittles are evil betrayers of our brains, but...what about gummy bears?

Katz said that some "higher-end gummy bears" do actually taste different, and Haribo's VP of marketing Keith Dannoff backed that up. In an email to Stevens, he said, "I can't speak for all gummy bears products but I can definitely tell you that the HARIBO Gold-Bears gummy bear products in the U.S. contain 5 distinct flavors: Strawberry, Lemon, Orange, Pineapple, and Raspberry." We'll ignore the concerning number of qualifiers in that statement for now and just be relieved that at least one classic candy isn't lying to our faces and our brains.