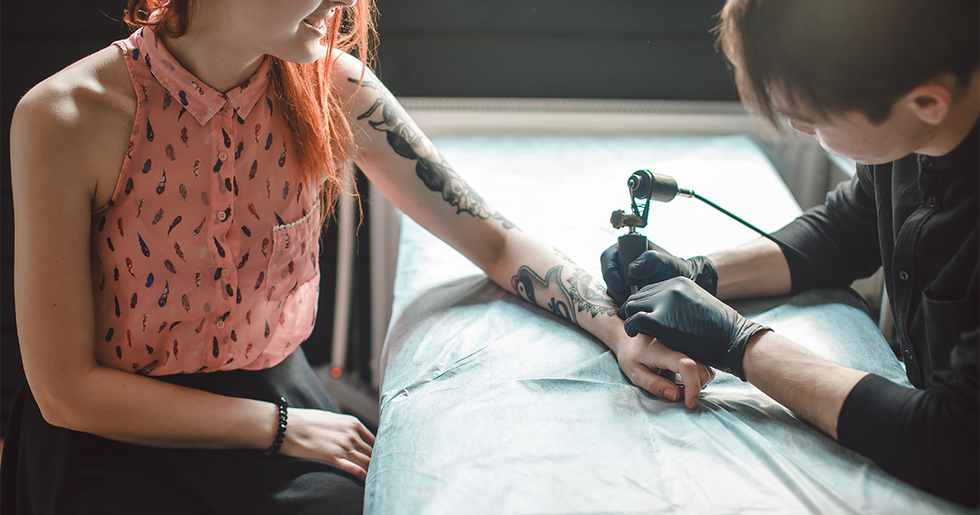 Tattoo Cover Ups and Fixes That Are Almost Unbelievable

As your mother always told you: tattoos are forever, so if you're going to get one you should be sure. That hasn't stopped tons of people from getting truly awful tattoos though. And this article is here to show you that even a bad tattoo isn't a life sentence. Tattoo artists are some kind of wizard because a good one can take a truly awful tattoo and turn it into art.

If you don't believe us, we have the proof: the best examples of fixed tattoos, all compiled right here. Whether we're talking about coverups or refreshes of the same tattoo, these fixes are absolutely amazing. If you've got a tat that you're not in love with, keep reading to get some inspiration for what could be. Or just marvel at the talent of these artists, because they deserve all of your awe.

Let's start with one that's big and bold.

The original peacock had some odd extra detailing at the top, but thanks to the skills of the coverup artist it became one big, beautiful peacock.

This is why the right artist makes all the difference.

It's the same tattoo, but it looks completely different when done well.

I'm sorry who allowed that face to exist?

It's truly horrifying. I would give myself nightmares if that were on my body.

If you're going to get a text tattoo make sure you like the words.

Or else don't and end up with a gorgeous coverup like these flowers, which isn't the worst outcome in the world.

Another example of "get the right artist".

It might not be the exact same tattoo, but let's be honest: there was no saving the original. The fresh lotus is a fantastic replacement.

This tattoo fix is maybe the smartest one on this list. To take a bad drawing of a Pikachu and turn it another Pikachu's bad drawing? Ingenious.

Look at this fancy dinosaur.

The original tattoo wasn't bad, per se. It maybe just needed a slight touch-up. But this funny dinosaur is undeniably better.

That red stripe element was retained, but the drawing around it is so much better. A perfect re-do.

The image on the left was a bit of a tattoo meme for a long time here on the internet. It's incredible that someone could make it look this great.

As a man with a video game tattoo, I can tell you that the number one thing you want out of it is a perfect recreation of what you see on the screen. This Galaga tattoo does just that.

They say there's beauty in simplicity, but what about when someone takes something simple and adds beauty to it? Was that beauty there all along? Or does it disprove the old axiom?

I am the night.

So they covered up a spider with a picture of Batman? Did anyone even ask Spider-Man how he'd feel about that?

An upgrade to HD.

Sometimes it takes a minute for your ex to show their true colors.

You can never erase your past relationships from your personal history completely, but your point of view on those relationships can, of course, shift dramatically. I like to think that's what this tattoo is about, and is not about taking potshots at an ex.

Another name getting the ol' cover-up job.

Listen, this new tattoo is incredible, but let's all take it as a lesson and resolve to never get an ex's name tattoo'd on us, ever.

From sketch to inks.

It looks like someone just finally got around to finishing their drawing.

This first tattoo looks like it took 30 minutes and the guy got it done over his lunch break at Quizno's.

A much more elaborate compass.

These two tattoos look like the difference between an ink stamp and a lovingly-rendered 3D drawing done by someone at Pixar (in their spare time, of course).

I dunno, I think the first tattoo is pretty cool, if only because I don't know what show is being referenced by the big flower tattoo on the right.

This second tattoo, with the owl, is very neat, but I can't help but try to figure out what that first tattoo was! It could be anything, but I just can't tell!

Not only does the new tattoo look incredible, but flowers are objectively a better subject for a tattoo than maple leaves.

It's obviously a well-made tattoo, but there are some distinct H.P. Lovecraft "we are infinitely small and know less than nothing about the universe" vibes coming off of it.

The original, generic tribal tattoo? Not tight. The new samurai warrior tattoo? All kinds of tight.

It's still grandma, but more so.

The first tattoo couldn't decide if it was a line-art drawing of grandma or a realistic rendering of grandma. The second tattoo at least makes a choice.

There are no limits to tattoo coverups.

If you can straight up have a black blob tattoo covered up, you can have anything covered up.

Every single dog is worthy of a tattoo, and clearly Teddybear here deserved better than what he got on the first go-around.

Detail and line-work can change everything.

The person who posted this tattoo to Reddit said they liked both tattoos about the same, and I have to agree. More detail doesn't always make for a better tattoo.

Imagine getting a tattoo about your sweet tooth, and then getting diagnosed with diabetes. That's the tattoo nightmare scenario.

What's even going on in that first tattoo?

I'd say this was an entirely new tattoo on an entirely different arm if this guy hadn't taken such care to line up the second picture so perfectly (and also wear the same sleeveless black t-shirt).

Just a little clean-up work, is all.

Wow, it's almost incredible how much better this tattoo got as it went along. In that way, it's a lot like the Harry Potter series itself.

Who are these brave souls getting 3D spiders tattooed on themselves? I would jump every time I looked at my arm.

A word becomes the ground.

Tattoo cover-up work is easy if you just take a bunch of black ink and draw all over the thing that was there before!

From an unclear bunch of outlines to a lovely little portrait.

There are some definite Bob Ross vibes in that second tattoo. The foreground is full of happy little trees.

The Superman logo is sneaky hard to draw. I used to practice in the margins of my notebooks all the time in high school. So, great coverup, but I do have sympathy for the original tattoo artist.

Listen guys, a coverup's a coverup. If this guy is more happy with his tattoo now, who are we to judge? (For the record, I think this tattoo rules.)

Not only did the coverup artist create an amazing new work, they also incorporated the moon into the new piece. It's like the whole tattoo evolved.

Sometimes you have to go big and bold to cover up a past mistake.

In this case it's a good thing they did because the outcome is amazing. The way the artist still gave the new version depth while covering the solid blacks of the old ones is truly impressive.

This gives a whole new meaning to "touch up".

It looks like a completely new tattoo, even though it's the same thing. Wow.

Here's a creative way to do a cover up.

The all-black with an image scratched out is SO cool, plus it's dark enough to cover up any problem tattoo.

Excuse me while I drool.

The way the artist managed to work so many bright colors into this cover up is gorgeous.

One of the coolest things about coverups is how they can inspire a huge, bold piece.

Like this powerful skull and rose piece. Having a huge canvas already defined inspires so much creativity.

For this one you may have to check out the original post to see the before picture.

But if you want a teaser: it's Pusheen in a banana. Yeah, not what you were expecting.

Cover-ups don't have to be huge.

Sometimes the tattoo stays the same, but just...better.

It's hard to believe the improvement on this one. Everything just looks so much better.

And it turned out completely epic. It's a bold choice to cover multiple problems at once, but in this case it was the right choice.

If you can't see it, there's an old starfish hiding under this beautiful fish.

But it's definitely nowhere near as beautiful as the final fixed product. Look at those colors.

Sometimes all it takes is a really good touch up.

The shape of this piece didn't change, but boy did it get better. Punching up the linework and colors can make a serious difference.

This one comes with an amazing story.

The top photo has the name of the woman's abuser. The bottom is the cover up.

What was even happening in the first version???

Clearly the original artist failed every geometry class. But the cover is pretty amazing.

The artist for this little raccoon did an amazingly slick job of incorporating the original.

You'd have no idea there was a smiley face hidden in there, but if you look closely at the tail you can see the original lines.

If we learn nothing else from these photos it's that you should always think carefully before you get a tattoo.

If you don't, you might end up with a horror show like the first image here. The cover up isn't finished, but the in progress photo is gorgeous.

The final product on this one is such a cool example of minimalism.

It's a great style to choose for a cover-up since you can incorporate large blocks of black ink while still looking sleek and clean.

Even a cover-up for a tiny tat can turn out amazing.

The old tattoo's shape is still hidden inside, but the new piece is so much more.

Protip: if you want a realistic portrait, vet your artist beforehand.

Otherwise you might end up with something absolutely goofy like the original here. The improvements are mind-blowing.

The original tattoo in this case was a challenge: it was messy looking and spread out.

But the choice of a big, impressive cockatoo made all the difference. You'd never know what was underneath.

Not all cover-ups have to be huge.

This simple, small rose got covered by a little bouquet, and the result is sweet, simple, and perfect.

We all made mistakes when we were younger.

But I'm glad that my mistake did not involve a tattoo that looks as bad as this Libra tat. I do wish I had this beautiful butterfly.

And boy did this tattoo get a glow up. This is just evidence that a cover-up does not have to be the same as the original tattoo, because it went in a completely different direction.

Little tattoos are the easiest to cover.

Which can lead to some impressive work. Look at the shadows on this little spidey boy!

Here is the proof, plus a great example of what you can do instead. Just as beautiful (more beautiful for sure), and lasts longer.