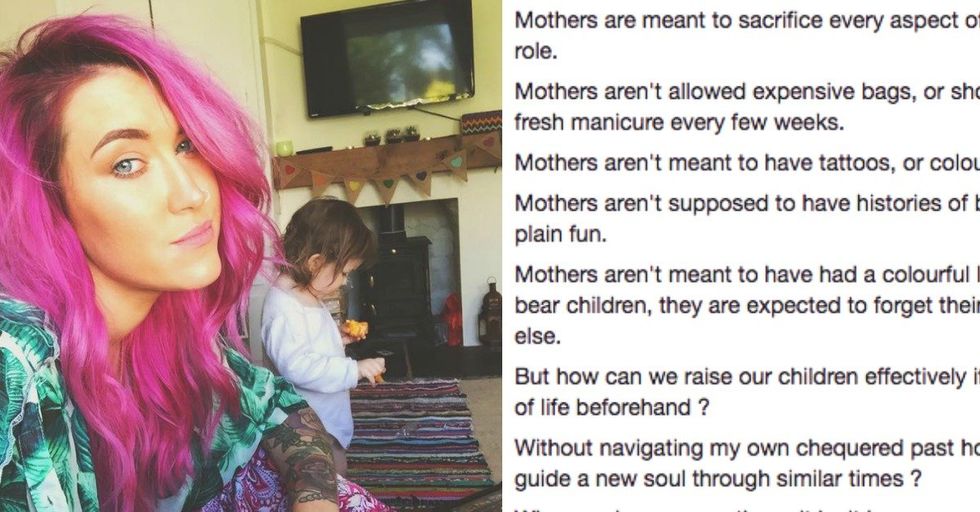 The year is 2017, and yet there are still misconceptions and stereotypes about what people "should" look like and what parents "should" do for their kids. In fact, even though we've made a lot of progress as a society, the proliferation of social media has made it easier for people to judge and express those opinions from behind a keyboard.

But for every troll that's out there, there is someone speaking out against discrimination or, quite frankly, simply annoying commentary.

One of those people is Gylisa Jayne, a mom from the UK who has a two-year-old daughter, Lily.

As you can see, she has colorful hair, colorful tattoos, and a few piercings, which apparently means that she doesn't look like a mom — at least that's what she was told. In a Facebook post that's now gone viral, she explains exactly what went down: "Someone said to me a few days ago, that she hadn't thought i was the type ' to be a Mum'. I shrugged it off because if there's one thing I have learnt about motherhood, it's that people will say cunty stuff a lot, and they don't always mean it. I can't have shrugged it off too well, because it's played on my mind ever since. It's one of those common phrases, we label 'Mother' and have a stereotype in our heads. A 'Mother' has to live up to a certain standard, and it isn't just taking care of your own kid...

"Mothers are meant to sacrifice every aspect of themselves, to fulfill their role," she went on to say.

"Mothers aren't allowed expensive bags, or shopping trips out, or to have a fresh manicure every few weeks. Mothers aren't meant to have tattoos, or colored hair or piercings. Mothers aren't supposed to have histories of being reckless, feckless or just plain fun. Mothers aren't meant to have had a colorful life of experiences before they bear children, they are expected to forget their identity to raise someone else. But how can we raise our children effectively if we haven't experienced a bit of life beforehand ? Without navigating my own chequered past how could I possibly hope to guide a new soul through similar times ? When we become mothers, it isn't because we are just dying to wipe someone else's arse. It's because we want to add to our lives, and watch someone else grow. It might be because after everything we have been through, we have finally found some stability - and having a family of our own helps us feel grounded. Motherhood isn't an exclusive club that you can only get into if you look or act the right way. It's full of women that all have lives and tales and colorful histories. Women of every type, from every background and every descent. Women that swear, women that don't, women that are real, and women that don't give a f*ck about what you think.... So I might not fit someone else's expectations of how I should be, but my daughter reckons I'm doing a pretty good job."

Jayne said she mainly wants mothers who read her post to know that you don’t have to lose any part of yourself to become a “good" mom, and that dads get unfairly labeled, too.

“There isn’t a one size fits all to motherhood, quite the opposite ― everything that we experience in life, and the way we express ourselves are paramount to helping raise another individual," she told HuffPost. “That’s what we want isn’t it? More individuals, instead of everyone being the same. It’s something to embrace. And something to love."