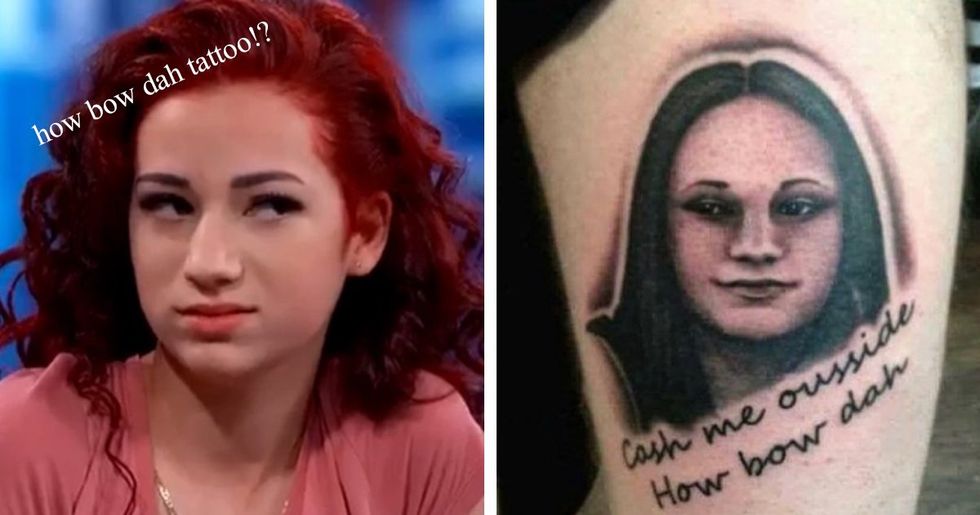 In case you haven't heard the news, tattoos are permanent. This means that you probably shouldn't get a tattoo of something temporary that you might regret later, like a romantic partner's name, a popular meme, or something really weird and childish.

While these are those people, they might want to take a step back and reevaluate their choices. Because dang, they have made some bad tattoo decisions.

This tattoo is going to last way longer than the "cash me ousside" girl's career. Oh boy.

Try explaining this tattoo to your children in about five years. I guarantee they'll have no idea what you're talking about.

Something tells me that Pickle Rick from Rick and Morty isn't going to be a lasting character in the zeitgeist for years to come.

Someday, this person is going to be 80 years old with three portraits of Robert Pattinson as a vampire on their back. The next one is beyond bonkers.

Remember the dress? The dress that people couldn't decide was blue and black or white and gold? Yeah, well, it's tattooed on this person's body forever.

It's written right there on the tattoo! This Spongebob meme isn't going to last forever, but this regrettable tattoo sure is.

And this is why you don't get your girlfriend's name tattooed on your body. When you break up, your only options are to get it covered or date someone with the same name.

Remember this dance? Yeah, neither does anyone else. Except the person who has this tattoo, of course. They'll never forget it.

Is the ironic "This is fine" referring to the giant tattoo this person now has on their leg forever? Because if so, I agree. The next one is truly a statement piece.

To be fair, this address is forever burned into the brain of every kid who saw Finding Nemo a million times when it came out.

The thing is, this six-pack is never going to go away. And even if it transforms into a real six-pack of muscles, the tattoo will distract.

"Tag me in memes" is probably the most temporary phrase there is in the English language. This is a disaster already happening.

I bet this person already regrets their Charlie Sheen tattoo. The next one is truly terrifying in so many ways.

I don't even know what this terrifying creature is, but I see it in memes and while it's mildly amusing in that context, it's not in tattoo form.

Knowledge is power. Nolege is the lack of a ledge.

I have no words. This person should be ashamed of themselves.

I have the best angles. The next one, while I like the sentiment, is um...ill-advised.

But like, even if he's re-elected, at some point, this tattoo will not be true. In any sense of the word.

I think the idea that a tattoo would disqualify you from employment is so old-fashioned, but this one? This is pushing it.

This was the biggest thing in the world...for like fifteen minutes...several years ago. I just think this already hasn't aged well.

I don't know if this is a meme or what, but it's oddly specific and terrible. The next one will make your head spin.

Double negatives! All the way! Maybe this person should just...give up.

I hope this guy is getting some royalties for all the free advertising he does for these fast food joints. That's some commitment right there. To what, I'm not sure.

Um, what? I have so many questions, but I don't want any of them answered.

This is quite the movie tattoo to commit to. I believe this person will be full of regret quite soon.

If you regret "nohing," you'll regret everything. Share this with someone who needs a laugh!