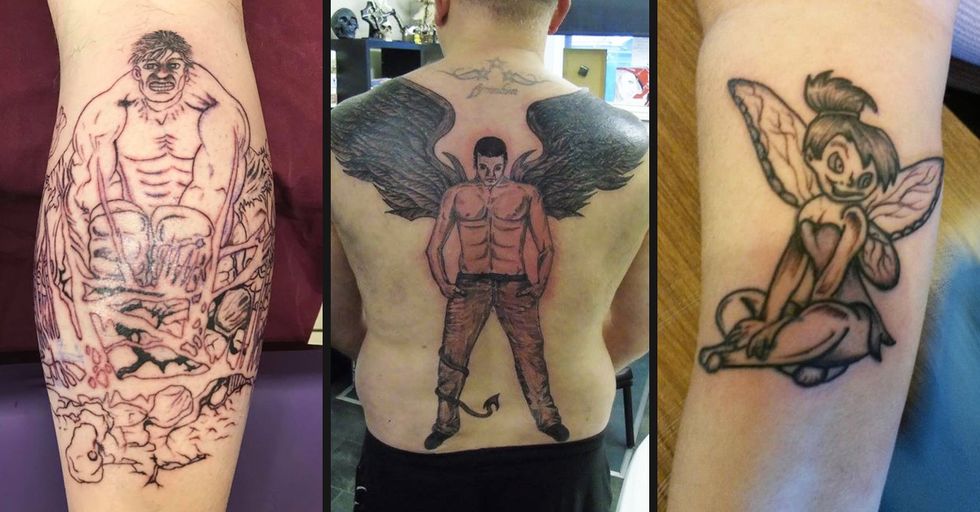 Tattoos So Bad The Artists Should Be Arrested

They say that diamonds are forever, but so are tattoos. Usually, these pieces of art sit beautifully on the skin and are admired for generations. Despite their beauty and craftsmanship, people with tattoos often find themselves being asked questions along the line of “you know that’s forever, right?”

It’s usually hard to imagine why someone would ask such a redundant question, but the following tattoos might make it a little easier to relate. Here are 30 tattoos so bad you may find yourself thinking, “They know that’s forever…right?”

This looks a case similar to a child tracing over a complex image with a colored pencil and expecting it to look just as good. It's not bad, it's slightly similar, but it certainly isn't as impressive. Better luck next time.

It's Supposed To Be A Galaxy

It's not, obviously, but it's supposed to be. It's hard to tell exactly what galaxy they were going for, but unfortunately this huge piece looks like something a cat hacked up after eating Oops All Berries. Sometimes complex blending bleeds and has trouble healing, this doesn't appear to be the case in this tattoo. It just looks like the artist needs way more practice, and left this poor client with one heck of a painful cover up in the future.

Portrait work is hard. Getting all of those details in on paper or canvas is hard enough, so imagine taking that advanced technique and applying it to tattooing on a bleeding, wincing, moving skin canvas. That said, there are still great portrait tattooists out there doing amazing work. This isn't one of them.

Lions On A Cross

Sometimes moving from concept to actualization just doesn't go as planned. This is truly an unfortunate example of that. Was there not enough space for the detail work? Was the concept too complex? One may never know, but what's easily digestible is that this tattoo just didn't work out.

There's a rule in carpentry that you measure twice and cut once. Surely there is some sort of tattooing equivalent when it comes to cover ups, spelling, and grammar. Unfortunately, this client will now have to have a cover up of a cover up. What are the odds?

The noble wolf is the subject of many first tattoos, last tattoos, and every tattoo in between. They stand for nobility, family, strength, and even magic. This wolf, however, stands for "you tried," as its execution leaves much to be desired. Thought we're sure that the artist has worked hard to improve and master their craft after this unfortunate incident.

Getting a tattoo feels a lot like that part of your skin fell into a burning ring of fire. It burns, but the pain is usually worth enduring as you emerge with a new, beautiful piece of art.  That, however, was not the case with this Johnny Cash tribute. A moment of silence, for classics lost.

Is this a falcon? Perhaps it's meant to be an eagle? While it's a  little hard to determine just what kind of bird it is, one thing is easily discernible: the poor little guy has no feet. Is it an aesthetic choice or an artistic oversight? The world will never know, but that couple with the overall less than impressive look of the piece makes this tattoo nothing short of tragic. Unless it's a tattoo of something a child drew, in which case, nailed it.

There was a time where this tattoo was the absolute one to get. It meant owning your sexuality and declaring your status as a sexy vixen. Unfortunately this tattoo went a little sideways. The lines lack straight definition that makes it appear this bunny had way too much coffee. Though there have probably been more bad iterations of this tattoo than good ones, so perhaps this is just the standard.

Eyes On The Back Of My Head

If these eyes were functional, this tattoo would be one thousand times cooler. They are not, however, functional, thus reducing any possible amount of efficacy and cool factor to zero. It's just creepy, but maybe that was the goal. Hats off to this client and the artist...or perhaps the hat should go on.

Imagine hearing the "Imperial March" rising and then this version of Darth Vader rounds the corner. Would you be afraid? Would you laugh? Honestly, it looks a little like Batman, and that might make it better or worse depending on who you ask.

This is one huge tattoo of Lucifer the Fallen Angel. Unfortunately for the client, the details seem to have fallen as well. Wings on the back are a common tattoo, and usually the wings alone span the length of the back to get the details right. Perhaps the client or possibly even the artists didn't quite think the size of this through.

A Penny A Day

Actually, this isn't a penny. Is it a silver dollar? A bad rendition of the Chiefs logo? Eh, who knows. We do know it's unfortunately a disaster of a piece for this client. The size of it is the worst part. That's going to be one painful and expensive cover up.

This majestic eagle stands ready to represent patriotism and the American way even if it's in a sub-par fashion. This is another one of those unfortunate occurrences where the execution just didn't live up to the concept.

'Til Death Do Them Part

Hopefully the quality of these tattoos are no indication of the strength of the bonds they're meant to immortalize. If so, this romance may be headed for disaster at high speed. It's best to think of this as an unfortunate tattoo and nothing more.

It's always cute to see your baby's feet stamped be it on paper or in tattoo form. These feet, however leave much to be desired. While the tattoo itself is a simple concept, line work is easily one of the most important skills a tattooist can learn. This quickly went from cute to whoops.

We're not sure if this was done by an amateur in their bedroom or if somewhere there exists two people who have never touched a deck of cards in their life. The Ace of Kings isn't a thing. Sometimes people create things for personal reasons so perhaps that's what this is. That's forgivable. The line work, however, is not.

This tattoo was probably meant to be a sweet homage to the memory of a parent. It clearly became a nightmare as the end product looks like something closer to what you'd find on the set of a horror film. Hopefully the client was able to have an amicable fix to this tragedy.

This tattoo kind of looks like it might be tribute to the sugar skulls of Dia De Los Muertos. It also looks like it could be a luchador gone wrong. Regardless of what it's supposed to be, it appears to only have become a nightmare.

Here is a tattoo of The Joker surrounded by cannabis. Perhaps he toked a little too much and that's why his smile is distorted now, but a far more likely explanation is that this complex idea was a bit out of reach for the skill level of the artist. Now it just looks like an edgy mistake.

At least it looks like it could be a dad. The picture looks like a dad, the tattoo looks like a meme. It's an unfortunate fail that probably didn't leave the client as jubilant as the subject matter.

This one was just shy of being good. Aside from the face and the wings that look like fleshy, veiny...things, this tattoo isn't all that bad. Unfortunately, the face and wings are kind of what make a fairy so points for trying.

As if sonograms weren't already low-key creepy enough, a botched tattoo ups that creep factor to uncomfortable levels. Where this went wrong is hard to point out, but no matter how you look at it, it's an unfortunate display of bad execution.

Honestly, it's hard to know what this is. Is it a zombie? A vampire? An emo rock frontman?  Regardless of what it's supposed to be, it looks like the inspiration for it was ripped right out of a fourteen-year-old goth kid's notebook. It's big cringe in the worst way.

The face on this Hulk is probably the worst (and therefore best) part of this entire piece. That's not to say the rest is good. It's not. The face, though, just never fails to incite laughter. It's highly likely that when Thanos trounced Hulk in Avengers, this is what he saw and was terrified of becoming if he challenged him again.

This looks like an attempt at a sexy cowgirl, but it unfortunately took a big left turn somewhere. The piece looks scrunched and off, and that's before the line work and flag are broken down. Hopefully the client was able to get this one touched up for free.

This looks like a self-inflicted nightmare by someone with a 10-speed Huffy and way too much Monster in their system. Maybe the artist doesn't like Monster, but they also don't seem to like practice either. They came in hot on this huge piece with the precision of a disoriented amateur, and for that, a moment of silence.

Portrait Of A Girl

There are a lot of portraits on this list, but the fact that portraits are hard cannot be emphasized enough. If someone is going to get a big picture of someone's face stuck on their skin forever, one would think more care would be taken in picking an artist. Yet, here is another example of a portrait gone wrong.

Wizard At The Gates

This piece is huge. It is also awful. It could be Merlin outside the gates of Camelot, it could just be a nameless wizard in front of a nameless castle. Names and locations aside, this whole piece is just one huge nightmare of errors and ineffective execution. Somewhere, a child with a box of crayons is creating art just like this, and one can only hope that this tattoo is a perfect replica of that child's work.