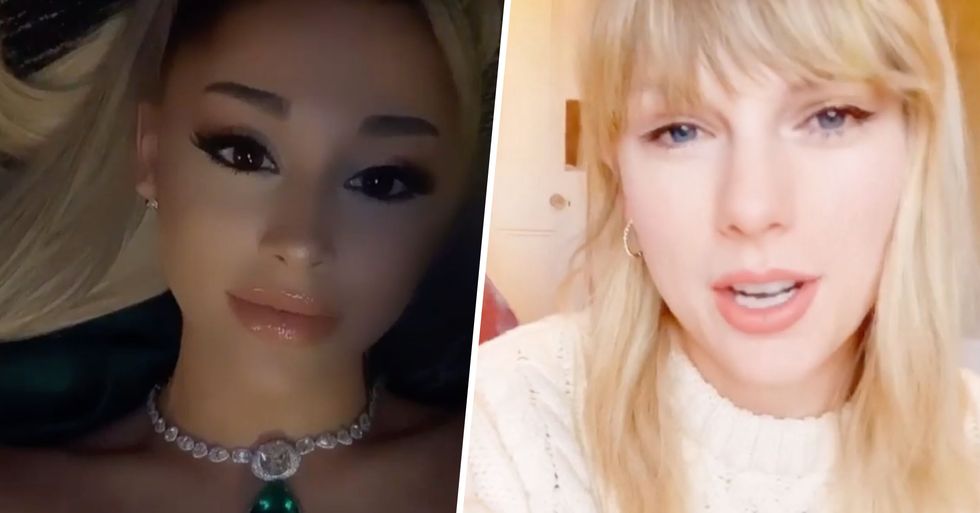 There's no denying we're all strapped for cash right now, with businesses closing down, and people still uncertain when they'll be able to go back to work, everyone's in a lot of financial strain.

But 2 celebrities have resorted to doing the most incredible thing for people struggling to pay their bills.

If you don't know who these guys are, then you should probably leave.

These are two of the most influential musicians to grace the music industry. Taylor Swift and Ariana Grande... obviously.

Both singers were destined for stardom from an early age

And although they both started out on different platforms, their passion for music guided their way.

It was Nickelodeon's hit TV show Victorious where she played one of the main characters, Cat, that got her noticed in the industry.

Although she loved acting, it was music that was her true passion.

And that's exactly what shone through when her career entered a new phase after catching the attention of record executives as well as fans.

Since becoming a global superstar, she hasn't slowed down.

Touring the world sharing her music is just what comes with the title.

Taylor Swift is right beside her, and it's easy to see why.

Since she released her debut album in 2006, her life completely changed.

She transitioned from being a little known country singer to a global sensation.

And has garnered an enviable amount of critical respect, last year she was named the worlds highest-paid celebrity by Forbes magazine. And that's no mean feat. But unfortunately, the music industry isn't the same as it once was.

It's fair to say the music industry is suffering right now.

A great cause set up by Tom Cleary. Emergency fund for anyone in the music industry that is suffering financially f… https://t.co/oJzF9aOO9c
— Marcus Bonfanti (@Marcus Bonfanti)1585212773.0

The detrimental effects the coronavirus is having on the music industry are loudly heard.

Major festivals around the world are cancelling their shows.

This month alone Coachella and Stagecoach, Ultra Music Festival, SXSW, Lollapalooza Argentina, Treefort Music Fest, Brussels' Listen! Festival along with several other major events have been called off due to the pandemic.

The aftermath has impacted everything.

Even though tours have been delayed and concerts cancelled, nothing will stop music. Be sure to check out the brand… https://t.co/KXUCK3f4ur
— WXRT Chicago (@WXRT Chicago)1585164255.0

The amount of cancelled national or international tours just continues to grow day by day.

And the collapse is already taking its toll.

The artist manager, Allen Kovac, who's worked with a variety of acts, says: "You have people delaying on-sales for tours, and you have people who are going to postpone tours. It's chaotic and stressful, from agents and managers to artists, their families, and their support teams."

This disruption has created a volatile environment for artists.

It not only affects songwriters and performers but audio engineers, sound and light crews, backstage teams, tour managers and other behind-the-scenes hands that are integral to any event.

It's the creative workers that are worse off.

As the music industry is trying to adapt, there is still some light in all this darkness.

Taylor Swift and Ariana Grande have been helping fans in the best way.

They have always shown love for their fans, but this takes things to a whole new level.

One fan Samantha Jacobson wrote a post on Tumblr.

It said: "I wish so badly that I could donate to the link Taylor provided [to the charity Feeding America] but because of COVID-19 my job, my only source of income, is closed for a minimum of 30 days. I have no job, no income, no way to pay my bills rn. If anyone happens to be able to donate and has it in their hearts to do so, anything really really helps with bills right now."

It just so happens that Taylor saw the post!

SHE CALLED ME BUDDY THE FIRST TIME WE MET TOO I AM HAVING AN ABSOLUTE BREAK DOWN https://t.co/pyVKWHruEk
— samantha (@samantha)1585172366.0

And on Wednesday gave Samantha the most incredible surprise.

Samantha wasn't the only fan Taylor extended her generosity to.

Holly Turner also received a big surprise in the sum of three thousand dollars! after writing a post about her financial struggles on Tumblr. She said: "I have been working my entire life to be able to live in New York City and I thought that was going to be taken, and she saved that for me. So, I am just so, so, so grateful."

But Taylor isn't the only star to be offering this financial aid...

Several sources have said Ariana Grande has been in contact with more than 10 fans who've lost their jobs due to the coronavirus and has sent them cash donations. Fans have been saying they received Venmo payments ranging from $500 to $1,500 although unlike Taylor, Grande has been keeping the payments on the down-low.

It's an incredibly kind gesture.

But the pair are going to be racking up some serious debt if they plan on helping everyone affected by the pandemic, more than 2 and a half million Americans are expected to file for unemployment due to the outbreak.