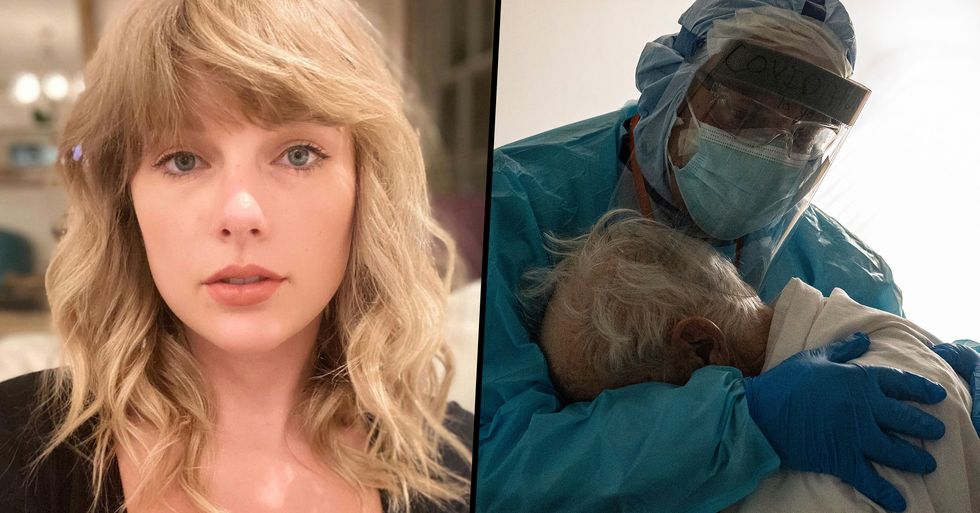 Taylor Swift has hit back at people who "don't care" about following COVID safety guidelines. Keep scrolling to read what she had to say...

Since her debut album back in 2006, Taylor Swift has captured the hearts of millions.

Her self-titled album sold 39,000 copies in its first week... Not a bad job for an eighteen-year-old newbie writing her own cutesy material, right?

And, fast forward ten years, she has now achieved accolades that most artists only dream about.

It's safe to say that she has well and truly cemented herself in the industry.

But, following this, it was time to take a break.

And after a year of healing, she came back with a gentle vengeance.

Then she used her platform again to speak out for the better.

In an unprecedented move earlier this year, Taylor suddenly revealed the name, tracklist, and release date of the album all at once in a series of Instagram posts.

Because it largely tells the stories of other people - both fictional and non-fictional. "It started with imagery," Taylor wrote in the album's prologue. "Visuals that popped into my mind and piqued my curiosity … pretty soon these images in my head grew faces or names and became characters. I found myself not only writing my own stories, but also writing about or from the perspective of people I've never met, people I've known or those I wish I hadn't."

But there's one song that stands out amongst the rest...

Track thirteen, "Epiphany." In the album's prologue, Taylor mentions that her grandfather's experience in the military was one of her reference points when thinking of themes and imagery for the album.

The lyrics are beautiful.

The song, which describes the experience of someone searching for an epiphany, opens with a scene from the battlefield, written from the experiences of her grandfather.

But some people think she's referencing the coronavirus pandemic, too.

The lyrics read: "Something med school did not cover/Someone's daughter, someone's mother/Holds your hand through plastic now/Doc, I think she's crashing out/And some things you just can't speak about."

Many people believe these lyrics are a direct acknowledgment to the sacrifice frontline workers have made during the pandemic...

The song also ends with the sound of heavy thuds - perhaps emulating bombs - and the beeping noise of what appears to be a heart monitor.

People quickly took to Twitter to commend the singer for her moving song...

I want to thank @taylorswift13 for giving us “epiphany” tonight. It’a incredibly therapeutic for those of us dealing with COVID firsthand.
— Joyridewheee (@Joyridewheee)1595570426.0

"I want to thank @taylorswift13 for giving us 'epiphany' tonight. It’s incredibly therapeutic for those of us dealing with COVID firsthand."

The repercussions of the pandemic seem to have affected Taylor, as now she's speaking out about it again...

In an interview with Entertainment Weekly, Taylor called out all those who "don't care" about COVID safety.

Taylor's interview comes after being named one of Entertainment Weekly's Entertainers of the Year.

In the interview, she discussed the making of her recent album, Folklore, before being asked about the song "Epiphany."

Revealing that the first verse is indeed a nod to her grandfather, she explained:

"I wanted to write about him for a while. He died when I was very young, but my dad would always tell this story that the only thing that his dad would ever say about the war was when somebody would ask him, 'Why do you have such a positive outlook on life?' My grandfather would reply, 'Well, I'm not supposed to be here. I shouldn't be here.'"

The second verse in 'Epiphany' is believed by many to relate to the current pandemic.

In relation to that, Taylor was asked how she felt seeing people crowding in bars without masks, in her hometown of Nashville.

"I mean, you just immediately think of the health workers who are putting their lives on the line -and oftentimes losing their lives," she began.

"I did a lot of research on my grandfather in the beginning of quarantine, and it hit me very quickly that we've got a version of that trauma happening right now in our hospitals."

"God, you hope people would respect it and would understand that going out for a night isn't worth the ripple effect that it causes."

She finished by calling out those going on nights out...

Stay at home if possible, wear a mask and think of others. For more on the singer, keep scrolling...