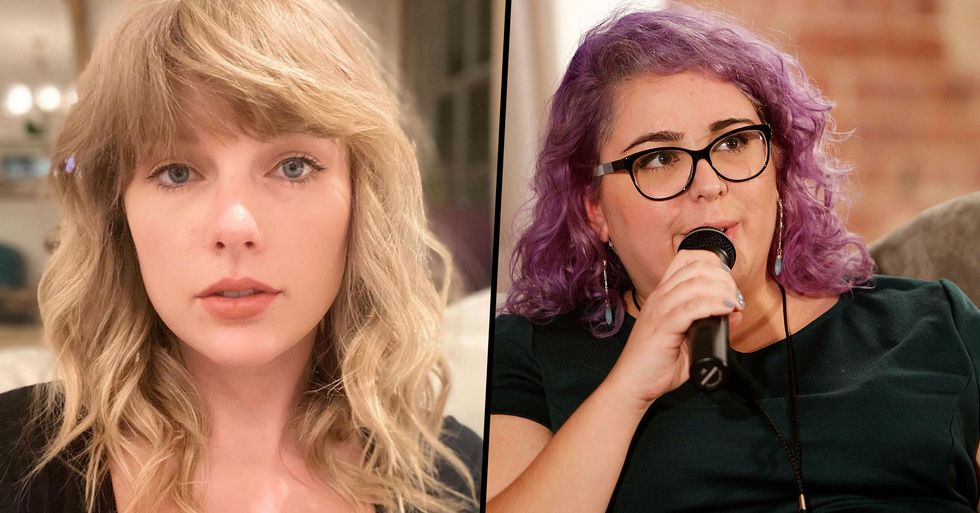 After Taylor Swift unleashed the masterpiece that is Folklore on the world, Swifties have gone above and beyond to promote the album for the great work that is it. But recently, they might have gone too far.

Keep scrolling for all the hot tea...

But despite it receiving on an overall positive review, Swifties have taken it upon themselves to make sure their idol is getting nothing but the best, even if that means they have to go to extreme lengths...

Since her debut album back in 2006, Taylor Swift has produced some of the best songs.

The self-titled album sold 39,000 copies in its first week... Not a bad job for an eighteen-year-old newbie writing her own cutesy material, right?

And, fast forward ten years, she has now achieved accolades that only artists dream about.

So it's safe to say that she has well and truly cemented herself in the industry.

And, again, she has used her latest album to spread some more important messages.

In an unprecedented move late last month, the artist revealed her new album Folklore to all of us.

She explained what this exciting album will consist of:

Because it largely tells the stories of other people - both fictional and non-fictional. "It started with imagery," Taylor wrote in the album's prologue. "Visuals that popped into my mind and piqued my curiosity … pretty soon these images in my head grew faces or names and became characters. I found myself not only writing my own stories but also writing about or from the perspective of people I've never met, people I've known or those I wish I hadn't."

And everyone's really been loving it.

The overall consensus has been positive, with many critics commending Swift for her songwriting abilities. Even though Swifites have been fed well with this latest masterpiece, it seems as though some of them aren't happy...

One critic was threatened by enraged Swifties after she rated the album a solid 8/10.

I'd be completely over the moon with an 8/10, but it seems as though that wasn't good enough for some of her fans, who proceeded to attack the reviewer.

Jillian Mapes, a Pitchfork editor, and critic, posted her review and was attacked just hours later.

Angry Swifties had dug up her phone number, email address and even photos of her home even though the review was positive, saying the album was "a sweater-weather record filled with cinematic love songs and rich fictional details."

Mapes recently tweeted that she's gotten "more Twitter threats to roll up and harm me than [she] could stomach to go through."

She also wrote this:

"I’ve gotten too many emails saying some version of, 'you are an ugly fat bitch who is clearly jealous of Taylor, plz die,' which is not the first time I’ve heard that from pop stans..." she said. "It sucks to be scared of every person milling about outside or feel like you can’t answer the phone. That said, I am safe and doing fine," she added.

pretty nasty that three days ago t swift stans were calling everybody who didn’t like folklore a misogynist and tod… https://t.co/OAyspxOO25
— ri (@ri)1595865871.0

And she's not the first critic to be completely bombarded by Swift's die-hard fans. Others have also fallen victim after they have posted their own reviews on the new album including Jon Caramanica, whose home was also threatened.

I think the bottom line is: Chill out, Swifties.

You're giving the rest of us a bad rep. Taylor Swift will continue to thrive without you having to threaten positive reviews by renowned critics, thank you. In other Taylor Swift news, keep scrolling to see how her personal life came to define her career...