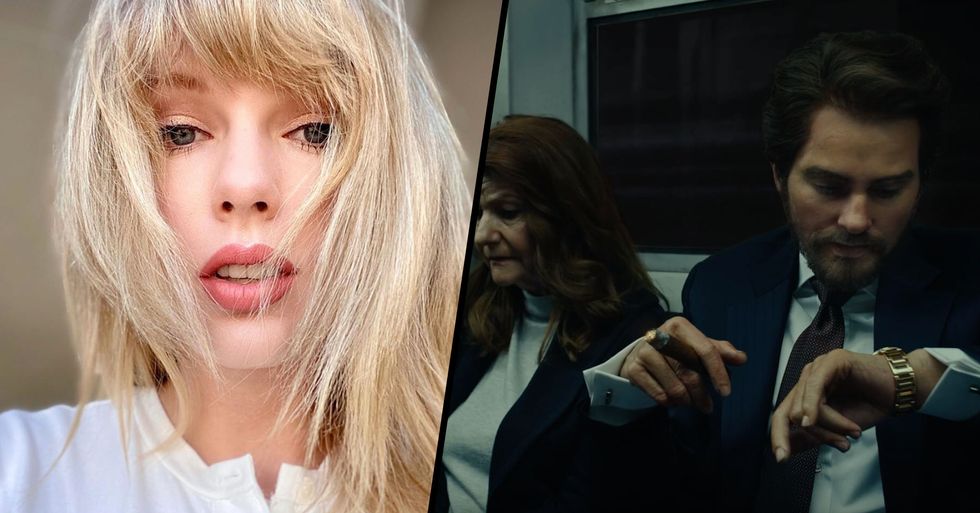 One of the most popular women in the music industry, Taylor Swift, has recently released another smash hit called "The Man", but this time, she has taken the concept of reinventing herself to a whole new level by actually becoming "The Man" that she's referring to.

And as good as she looks, it's pretty strange because she looks unrecognizable. But under the costume and all the makeup are a bunch of hidden messages that you probably didn't even realize.

Keep scrolling to see exactly what they are...

The journey wasn't an easy one, but Swift hardly discussed the dark side of the business, until very recently. She seemed to get sick of keeping up the pretense that everything was okay when behind the scenes, she was struggling with aspects of her personal life.

We all know Taylor Swift is an amazing songwriter and music producer, but there's one thing she doesn't get enough credit for... Her music videos.

They are visually amazing.

However, her latest project saw her take full creative control.

Taylor recently dropped her new video for "The Man" and after watching it, I am inclined to say that it is her best yet.

YNTCD is a song dedicated to the LGBTQ+ community and how they should be proud of their identity while OTY, a pretty new release, emphasizes how the youth have the power to promote political change. And her new video has another important message...

And after those two iconic tracks, we were excited to see what Taylor was going to do next.

And that's where "The Man" comes in. Keep scrolling to see the full video.

The storyline revolves around sexism.

After cementing her legacy in the industry, she has now opened up about every sexist issue that has ever irritated her and presented it in a high quality, artistic way.

Let me take you through the video and why each scene is important.

She plays a middle-aged, white, upper-class man, literally, and goes through what a typical day would look for him compared to others. And it's am important issue because in this lifetime, they get away with a hell of a lot more than most people.

And it's hilarious because it's all true!

I think Taylor Swift needs to secure an Oscar for this performance. Everything, from the costume, the makeup, all the way to the acting is exceptional. She looks completely unrecognizable as you'll see a bit later on.

The clip starts off in the office...

Where "The Man" is fist-bumping his employees, making them laugh and just generally doing what a typical boss does... At one point, he even encourages some of them to laugh because they aren't laughing enough, just to boost his ego.

Then we move onto the subway...

Where "The Man" is smoking and man-spreading like he owns the place, while other passengers are squished together. Man-spreading is a serious issue, but a lot of men still do it, even when there's limited space already.

He then gets off and looks around...

Before taking off his pants and peeing against the wall... Public urination is another disgusting issue that the male population think is alright to subject us all to.

The shift now changes to a yacht...

Where there are lots of bikini-clad girls dancing around the man as he shouts at the other guy who was unfortunate enough to be serving "The Man" champagne... Do I even need to go into detail with this one?

After a wild night, it pans over to his bedroom...

And obviously, there is a naked woman in his bed while he is fully dressed, staring at himself in the mirror before leaving her and disappearing. Hm... Where do we know that one from? Maybe every single night out?

He walks into his bathroom...

And after checking out his own self-portrait, he starts high-fiving every single weird hand he has stuck on the wall like it's his own personal museum.

The scene changed to the park where "The Man" is sat with his kid...

And checking out other women, obviously. He then picks the child up and starts swinging her around so that the women around him start gushing over his "parenting skills". The message behind this imagery emphasizes how little some fathers do and are commended for it.

He is marrying a young woman, which seems to be a growing trend in the celebrity world. She seems to be in her prime, while his dentures are the only thing fresh about him.

And the best scene comes at the end...

It shows "The Man" throwing a tantrum on a tennis court but no one is stopping him. Some have seen this as a nudge to the situation Serena Williams found herself in when she broke her racket on the court and had a game taken away from her while other male players have done the same but didn't face any consequences.

As the camera keeps zooming out, we see what this is really about...

Taylor Swift, as herself, is sat in a director's chair as The Man approaches her and asks how the scene was...

And you wouldn't believe what she says to him...

She says "It was pretty good, but could you be sexier, maybe more likable this time?" Yikes! But there's a good reason why she said this...

It was in homage to something someone actually said to her...

Women find themselves being subjected to more of these comments compared to males. Even though the scene is supposed to convey anger, which is what The Man was showing, the director told him to make sure it still looks attractive. He just nods and walks off, ready to re-do the scene again.

And just when you think the video is over...

We get to see a step by step tutorial of how they managed to transform Taylor into "The Man" until she was basically unrecognizable!

This is her before anything was applied...

They started off with the hair...

Bald Taylor is actually quite a look...

But it's all part of the process...

If you thought she looked scary before...

Check her out here...

And then the face makeup...

Voldermort, is that you?

A nice side shot for you all...

I mean, she could easily play a murderer with this look...

Oh and a quick side note, the voice of "The Man" is Dwayne Johnson.

And finally, the suit.

Voila! The look is complete!

She looks amazing doesn't she?

Here's the full video for Taylor Swift's "The Man."

If you're in the mood for more Taylor content then keep scrolling...