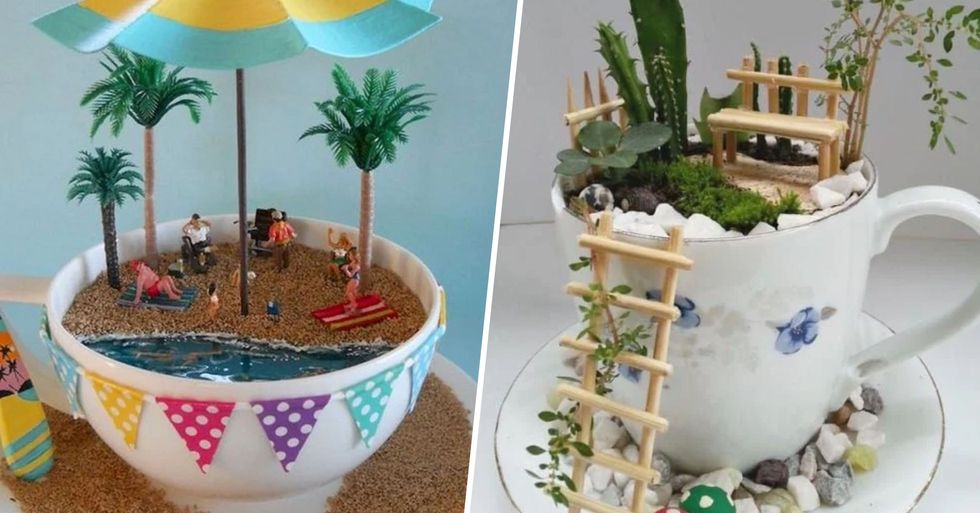 Tea Cup Gardens Are a Thing and They're Actually Really Adorable

While we're all stuck in self-isolation mode, it can be hard to find hobbies to fill up your day with. Typically, people spend their time binge-watching Tiger King or doing a jigsaw puzzle.

However, a niche group of people have shown us what dedication really looks like and, let me tell you, it is simply stunning.

Keep scrolling to see some of the most beautiful works of art in a teacup...

The vibrant tree really adds to this piece of art.

The intricate designs are lovely.

This one is bursting with spring feeling.

What a clever take on this story.

The dedication on this one is unreal.

A tiny home for a tiny character.

You would have to have really nimble fingers to have painted that bird.

Don't even start me on how gorgeous this one is. Those steps leading up to the cup was such a nice detail.

And if you're an avid gardener, then this style of garden is for you.

Imagine making such a pretty piece of art from an everyday item!

We love this one!

Here's another take on the cute ladder detail.

Now, this is truly a masterpiece. Someone even went as far as laying red bricks on the floor. We love it!

If you look closely, sat against the neutral tones is a cute, blue tea cup. inception at it's finest.

Some people are just so talented! This beach scene is to die for!

I don't know what's more beautiful, the cup or the set-up inside it.

Reflective of the season we're currently in, this one is really vibrant.

You can get pretty creative with these...

5. Beauty and the Beast.

This Disney inspired teacup garden is no doubt stunning, but requires a lot of thought and effort, as do a lot of these.

This would be the perfect place to live if it existed!

This one looks like it's been plucked out of a story book.

Who doesn't love fairies? This breathtaking cup was created with a little magic and a steady hand.

And here we have it. This one stole the number one spot for it's bright and fresh feel. Not to mention those stunning flowers. Imagine being this talented. Read on to see some more amazing art work...