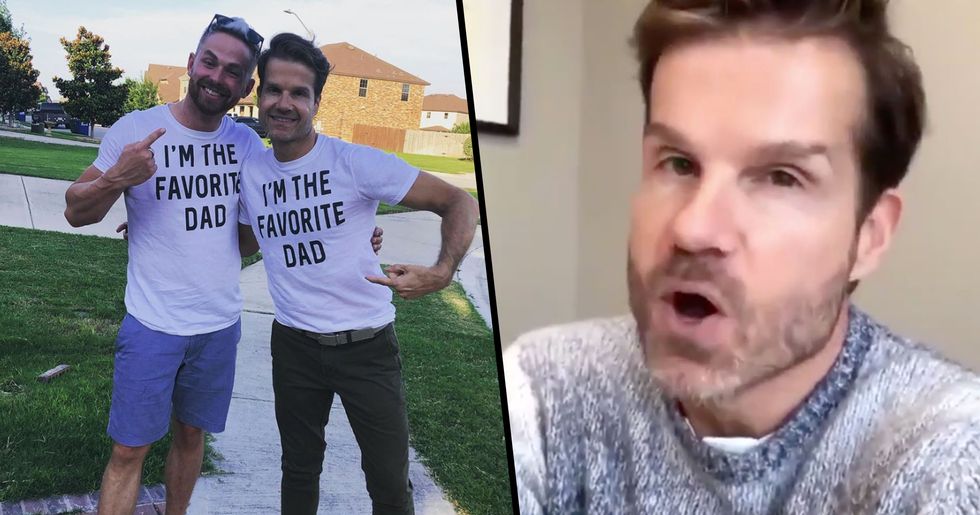 A substitute elementary teacher at a Utah public school has been fired after targetting homophobic comments towards an eleven-year-old student.

And now, one of the child's dads, the Dancing with the Stars dance champion, Louis van Amstel, has spoken out about the blatant display of homophobia, and how the incident has affected his family.

Members of the LGBTQ+ community have unjustly had to fight against hate and discrimination for years...

And, incomprehensibly so, it's apparent that there are still bigotted individuals out there who can't view the world with an open and accepting mind.

Some people seem to be a couple of decades behind the times...

And simply cannot fathom the idea that 2 people of the same gender can fall in love and be happy.

Many of these people simply can't keep their bigoted opinions to themselves.

And some even think it's acceptable to bully children over the matter...

News came in this week after a substitute teacher at Deerfield Elementary in Cedar Hills, Utah, unleashed her homophobic views onto an eleven-year-old student after he revealed that he has 2 dads.

Louis van Amstel, the professional dancer, and television choreographer, is one of the child's parents, and he has used his platform to slam the teacher and her homophobic actions against his son.

Louis is best known for his role on Dancing with the Stars.

The Amsterdam-born van Amstel, who has starred on the show as a professional dancer since 2005, has also choreographed and appeared on numerous TV shows such as Hannah Montana and Zack & Cody.

The dancer has always been open about his sexuality.

In an interview with Out, the forty-seven-year-old opened up about how he has consistently fought to be who he is: "I work all my life to not be labeled. I was bullied for being fat and gay and short. And all my life I worked hard to overcome that and be an advocate for anyone who's being bullied."

Louis doesn't believe in "coming out"...

"Why do people have to come out? Just be who you want to be." He mused during the interview.

And, in 2017, Louis wed his long-term partner, Joshua Lancaster.

The dancer excitably shared a photo of their marriage certificate to Instagram just before they tied the knot at a beautiful ceremony at the Sundance Mountain Resort in Utah.

So they and their future children would all share the same one.

And they met their future son, Daniel, for the first time in March this year after seeing his photograph online. “This boy since we met him feels like our son,"  Louis said. “Right now, it feels like I made him."

Daniel has since been living happily with his new adoptive parents...

But, sadly, not everyone is as happy as the van Amstels.

A substitute teacher at Daniel's elementary school made her views on his living situation quite clear...

In a homophobic rant on November 21st, the teacher went on to target Daniel and tell him that "homosexuality" is wrong in front of the whole class.

Captioning his post with, "Our child was bullied", Louis explained: "I just had a call from Daniel's school. The substitute teacher asked all the kids what they're thankful for... Which is sweet, right?"

His story takes a dark turn...

He continued: "Daniel - and I got choked up when he said it - said that he is thankful that he has finally been adopted by his two dads. The substitute teacher then gave her very clear opinion about how two men is [sic] wrong, and homosexuality is wrong."

The teacher went on to attack Daniel about his family in front of the whole class.

When she didn’t they went to the principles office to complain. I’m proud of those three girls and Daniel’s school… https://t.co/Fo6y76stlh
— Louis van Amstel (@Louis van Amstel)1574459207.0

And, according to Louis, went on tell the vulnerable child that 2 men living together is "sinful". Luckily, 3 girls in the class stuck up for Daniel, and went on to report the teacher to the principal.

This is a horrifying case of bullying.

And, even worse so, is that the teacher is the bully. Speaking to the New York Times, Louis explained: "It shouldn’t matter if you’re gay, straight, bisexual, black and white. If you’re adopting a child and if that child goes to a public school, that teacher should not share her opinion about what she thinks we do in our private life."

The school has now addressed the incident...

Kelly Services, the staffing company used by the district, said in a statement on Sunday that the substitute teacher was no longer employed by the company. “We are concerned about any reports of inappropriate conduct and take these matters very seriously," the statement said. “We conducted an investigation and made the decision to end the employee’s relationship with Kelly Services."

Louis has now praised the school for their handling of the incident.

The dancer said he was proud of how swiftly the school had handled the situation but was still concerned about the vetting process allowing the woman to teach at the school in the first place.

Let's hope that the van Amstels can now move on from this horrifying incident.

@LouisVanAmstel This is just heartbreaking. Blessings to your family! Stand tall Daniel and thanks to the girls w… https://t.co/BdgRWrcguP
— michele frazier (@michele frazier)1575063885.0

People have rushed to the family's support, noting that it is "heartbreaking" that gay men still get discriminated against, and saying that Daniel has a lot to be thankful for with his "two amazing dads." For more on blatant homophobia in 2019, keep scrolling to read about what Chris Evans had to say about Boston's "Straight Pride"...