Teacher Refuses to Confiscate Students' Phones, and Once You Hear Why, You'll Agree With Him | 22 Words 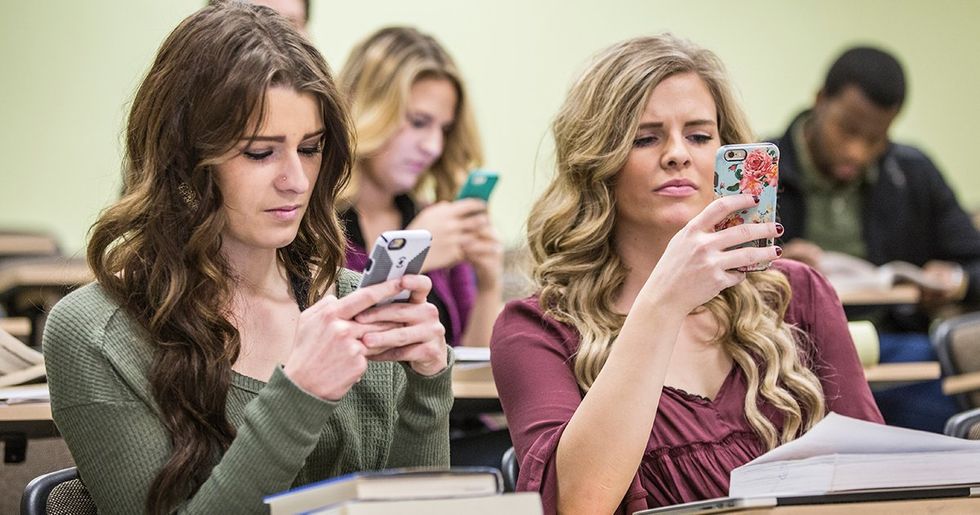 Teacher Refuses to Confiscate Students' Phones, and Once You Hear Why, You'll Agree With Him

We all know that being a teacher is no easy task.

Not only are they almost criminally underpaid; they also have to deal with all kinds of issues that those of us who work in an office environment have absolutely zero experience with. Anyone who elects to spend their workday with 25+ kids of any age deserves some serious recognition.

Of course, these days, teachers have more on their plate than ever before. Standardized testing, demanding curriculum standards, bullying, dress codes, student safety, sex education, mental health — the list goes on. Not to mention the fact that there is way more technology available to students these days. Unfortunately, that technology often serves as a distraction from classwork, so many districts implement bans on students' phones and computers.

But Jamie Mitchell — a teacher from Burlington, Ontario, Canada — has a different approach. And it's actually working.

There are plenty of things that make teachers' jobs difficult.

Like students arriving late to class, for instance. Nothing disrupts a well-planned lesson like someone who just has to make an entrance.

Then there's all that grading.

People who assume teachers' work days end at 3 pm forget that there's usually a bunch of grading to do at night.

And then there's all the drama.

Whether you teach preschool or high school (or anything in between), you can bet that there's going to be plenty of drama between students that has nothing to do with the Pythagorean theorem or a Shakespearean play.

But there's one issue that stands out above the others.

Cell phones. Pretty much every kid in high school has a cell phone these days, and many of them struggle with putting them away during class time. Or dinner time. Or...any time, as plenty of parents will attest.

Lots of teachers confiscate phones when they see them being used during class.

Other teachers have students put their phones in holders before class even begins.

Displays like this keep the phones out of students' hands. They also make it easy to take attendance!

He shared a thread on Twitter about his surprising decision to stop confiscating phones from students. That thread has now gone viral.

Some teachers might get some kind of enjoyment out of ripping those phones from their students' hands. Not Mitchell, though.

At first, he did what every other teacher did.

I was newish to teaching and new to the high school. I was told by other teachers that if devices were out I was ex… https://t.co/ysFQi5si3E
— Jamie Mitchell (@Jamie Mitchell)1552395869.0

But it changed nothing.

Every day I was carrying multiple devices down to the main office. Students who had their phones brought down a ce… https://t.co/5M3xoGwefd
— Jamie Mitchell (@Jamie Mitchell)1552395869.0

First of all, hauling the phones to the office day after day is a hassle — and we all know that teachers don't need any additional hassles in their life. But the confiscation also didn't solve the underlying problem. Students would just continue using their phones until they were confiscated.

There's also the issue of the phones being students' personal property.

What happens if those phones are stolen from the principal's office? And what if students' parents need to contact them in an emergency?

With all this in mind, Mitchell decided to stop confiscating phones.

He told students they were allowed to keep their phones throughout the class period as long as they kept them face-up on their desks.

And things actually got better.

Things got better. Did students still text? Absolutely. Did they play games? Sometimes. But I was able to talk with… https://t.co/HiIyE8caTk
— Jamie Mitchell (@Jamie Mitchell)1552395870.0

Sure, students still texted and played games, but they weren't able to hide their activities, meaning Mitchell could talk to them about how their behavior was inappropriate for class.

It was actually a pretty brilliant idea.

I liked this, because I was able to leverage these moments into conversations about individual learning skills, lik… https://t.co/DQcfh5cx1y
— Jamie Mitchell (@Jamie Mitchell)1552395870.0

Think about it. High school is meant to prepare students for real life, right? In the "real world," no one is going to confiscate someone's cell phone if they're using it during a business meeting. Isn't it better to learn self-regulation than to only be punished if you get caught?

Mitchell also allowed his students to use their phones for class-related activities.

"You mentioned the Richter scale, so I wanted to google what the largest earthquake ever was" "I'm putting a remind… https://t.co/B2LL8uRQMK
— Jamie Mitchell (@Jamie Mitchell)1552395870.0

Which is another brilliant side effect of the no-confiscation policy! After all, phones aren't just used for texting. They're tiny computers that offer access to the vast records of all human knowledge! Why not have students use that to their advantage?

It also made the classroom more pleasant for Mitchell himself.

Before long, Mitchell began thinking of ways to have the students use their phones for educational purposes.

Rather than confiscating the phones and limiting their use, he did the complete opposite.

Students have more computing power in their pocket then I ever had in school. And they are EXPERTS at using those… https://t.co/ztwK3dRCkl
— Jamie Mitchell (@Jamie Mitchell)1552395871.0

He encouraged students to use their phones for classwork, bringing his curriculum into the 21st century. Why limit yourself to the technologies used in the past when we're living in the future?

He even assigned homework and projects that made use of the phones!

I don't know about you, but I think I would have really liked the option to "take a video of a mathematical relationship" as a math assignment when I was in school. What a great way to bring what you learn in the classroom to the real world!

Allowing students to keep their phones made doing projects much easier, too.

I could do WAY more with my classes. No need for a computer lab when students were bringing their own devices. I le… https://t.co/IqohXwKnx8
— Jamie Mitchell (@Jamie Mitchell)1552395871.0

Mitchell didn't have to schedule time in the computer lab; he could just have students use the small computers in their pockets.

Best of all, off-task phone use plummeted.

Because they were so busy using their phones for school-related purposes, Mitchell's students didn't have the same issues with texting and scrolling through social media that they had back when he was still confiscating phones.

Of course, there were times that phones weren't allowed.

And when I needed the attention of everyone? "Please turn your phones screen side down and close your laptops" That… https://t.co/QqqbLuC77G
— Jamie Mitchell (@Jamie Mitchell)1552395872.0

During those times, Mitchell simply asked students to flip their phones over. Since the phones were kept on the students' desks, it was easy to see that they were paying attention and not distracted.

Mitchell ended his thread by stating that he would not be banning cell phones in his classroom.

They're too useful a tool to be eliminated from the learning environment. In Mitchell's opinion, it's better to teach kids how and when to use their phones than to simply take them away.

He also had this great point:

I think this stance falls in line with my own education philosophy. I'm not the controller of knowledge, doling it… https://t.co/85ptG8CrEN
— Jamie Mitchell (@Jamie Mitchell)1552395872.0

Allowing students to use their phones for classwork reinforces the concept that they have the power to learn. Who knows? They might even spend more of their free time learning new things, thanks to the encouragement Mitchell provides during class time.

Mitchell's Twitter thread garnered a lot of attention and praise.

This fellow teacher pointed out that cell phone restrictions are often about control, but it's much more productive to teach students the appropriate times to use their phones than to just take them away in an effort to eliminate the problem...which we know doesn't really work.

This person pointed out the importance of meeting students where they are.

As a teacher, you can't expect to walk into a classroom, take away students' personal property, and then have them hanging on your every word as you teach. It's just not realistic.

Some people brought up additional circumstances where having a phone in class was vital to their learning.

@realJ_Mitchell I'm an A student, all the way to two masters, but I also have narcolepsy. If a teacher would requir… https://t.co/gccpPETfjm
— Thiéry Adam (@Thiéry Adam)1552479700.0

Like this person who has narcolepsy, and who would fall asleep if they didn't have devices to keep them engaged in the lesson.

Or this teacher's student, who uses technology just to see the board:

Imagine how detrimental it'd be if this teacher refused to allow this behavior in their classroom! Students know so many incredible ways to use the technology that's available to them. Why discourage that?

These days, parents expect to be able to contact their kids even when they're in school. If you confiscate cell phones, it can pose a real problem for both students and their parents.

@realJ_Mitchell Great thread about students and device use in class... We need to leverage the potential for valua… https://t.co/qFQb5y12Zk
— Tyler Capton (@Tyler Capton)1552489951.0

Just because we went to school before cell phones were widespread doesn't mean that cell phones don't belong in the classroom. It's obvious that cellphones are here to stay, so it's better to teach people how to use them, right?

Mitchell also pointed out that the great cellphone debate is just one small part of the challenges faced by teachers today.

If you are here because of this tweet ⬇️ please remember that devices in classrooms is a sideshow issue in the real… https://t.co/w6WBtscVDQ
— Jamie Mitchell (@Jamie Mitchell)1552446646.0

As he points out, there are plenty of other issues that teachers have to deal with. This is just one that he feels he's solved in his own classroom! Share this with anyone who has a kid in high school!