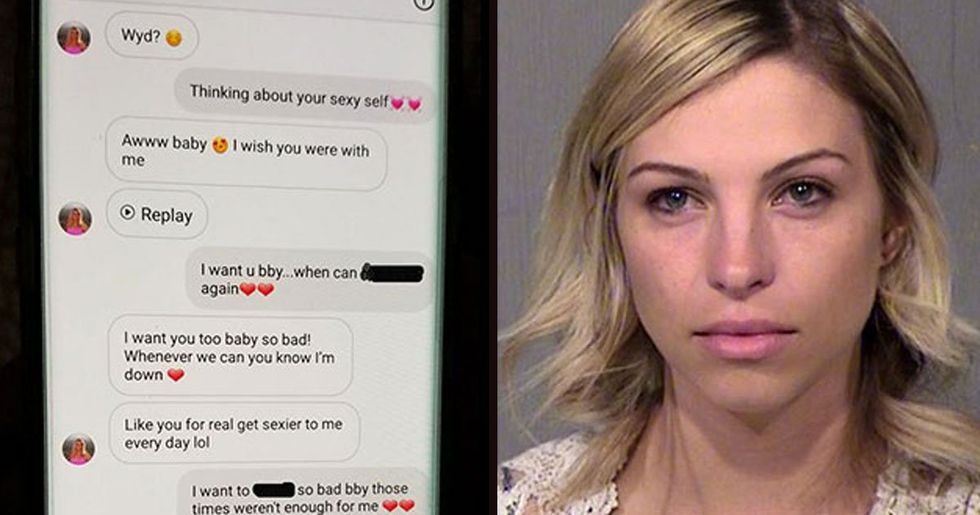 Generally, it is thought that school is one of the safest places for our children.

A teacher from Arizona has recently been sentenced to twenty years behind bars after having sex with one of her students who was just thirteen-years-old.

Keep scrolling to learn about the sickening acts of this woman and how she abused her role as a responsible teacher...

It takes more than good teaching to be a good teacher.

A teacher should be a role model.

Children of all ages, including teenagers, should look up to their teachers as role models and should feel comfortable enough around them to be able to speak about any worries or problems that they may have at that time.

But not all teachers commit to their jobs.

SESAME (Stop Educator Sexual Abuse Misconduct & Exploitation) complied alarming statistics that reported that over 500 educators in 2015 were arrested for sexual abuse of minors in schools in the US. Certain adults still engage in sexual activity with underage students to this day, and it is an alarming fact that it often happens under the noses of the authorities.

According to ABC News, the US Department of Education has estimated that 4.5 million students have experienced sexual misconduct at the hands of a school employee between kindergarten and twelfth grade.

Victims of sexual abuse by educators are often young people who are easily hoodwinked and influenced and are often lead to believe that the sexual acts performed by their teachers are normal.

But it's not normal; it's sickening.

Teachers who exploit their students like this truly deserve to be locked up for their crimes to ensure that they are kept away from harming any more children or teenagers. A teacher in Arizona recently felt the consequences of her actions...

The twenty-eight-year-old teacher who worked at Las Brisas Academy in Arizona was arrested in March 2018 after the parents of one of her students discovered highly inappropriate text message exchanges between the two. The student and his family have remained anonymous to protect their identities, but it was released that the student was thirteen-years-old at the time.

She would message her student over Instagram, and Zamora's messages are sickening. The boy's parents found out about the messages through a parental monitoring app, which began showing red flags for the repeated use of the word "baby."

It didn't take long for their relationship to become sexual.

Prosecutors said that Zamora's abusive relationship with her student began shortly after she messaged him via social media, and their conversations very quickly became sexual. According to Metro, the boy told police: "She said she wanted to give me a blow job and my stuff is really big and stuff like that."

A vile and unforgivable crime.

It was discovered that Zamora had sex with her student numerous times, often in a car, and it was reported that the couple had sex in a classroom while another student was forced to keep a "lookout." She also reportedly sexually assaulted the student at the back of the classroom while the rest of the class watched an educational video.

Post-it notes and "love letters" were found in the boy's possession which read sickening messages such as "U R Sexy" and other explicit material that has had to be blurred out in the images.

The hearing, which took place in Maricopa Superior Court in Phoenix, Arizona, saw Zamora get sentenced to twenty years in prison for her crimes. She received credit from the judge for the 500 days that she had already served in jail, much to the anger of the victims' parents.

Zamora attempted to apologize during her hearing.

The boy's parents were present during the hearing, and Zamora attempted to give a tearful apology in the packed courtroom. "I am a good and genuine person who made a mistake and regret it deeply," she said in a statement. "I'm sorry for any stress or pain I may have caused, I'm ashamed of my actions and I am completely remorseful and truly regret what took place."

Zamora tried to claim that she isn't a threat to society...

"I lived my life respecting and trying to obey every law. I'm not a threat to society," she went on to say - but this was not taken well by the courtroom, especially by the family of the victim.

The victim's mom and dad are distraught.

The mother of the victim made a victim impact statement before the hearing, stating: "In Miss Zamora's class, I started to notice a change in him. He wasn't that happy kid anymore, he became quiet and distant. When I found out about the disgusting things my son witnessed at school... is when I realized why he changed."

She groomed her victims.

"She tried to groom my child into believing this behavior was okay... Miss Zamora used her position [as a teacher] to keep my son quiet," the distraught mom went on to say in the hearing. "She's a true definition of a child predator... she gains their trust then lures them in for her own sick sexual desires."

The victim's mom ended her statement in an emotional and angry way.

She ended her statement by shouting at Zamora: "Your mind is foul, your heart is sick and you disgust me! You deserve to leave prison when you’re too old to bear children." You’re forever labeled a child molester and everyone hates a child molester."

The boy's parents have filed a lawsuit against the school.

The parents are seeking $2.5 million from the school, claiming that "their son will experience severe emotional and psychological symptoms due to the sexual abuse he experienced."

The boy has been affected in unimaginable ways.

According to the lawsuit, the boy is now "different with his mother. He no longer looks at females (including his mom) the same now that Zamora has worked her black magic." It is refreshing to see that Zamora has been sentenced to the prison time that she deserves, and it shows that the US government is refusing to take child sex abuse cases lightly.

We can only hope that this kind of abuse will come to a swift end. Our thoughts are with victims of abuse and their families; we hope that they make recoveries as fast as is possible in these horrible situations and can move on from the horrific abuse that has been inflicted upon them at the hands of someone that they were supposed to be able to rely on.