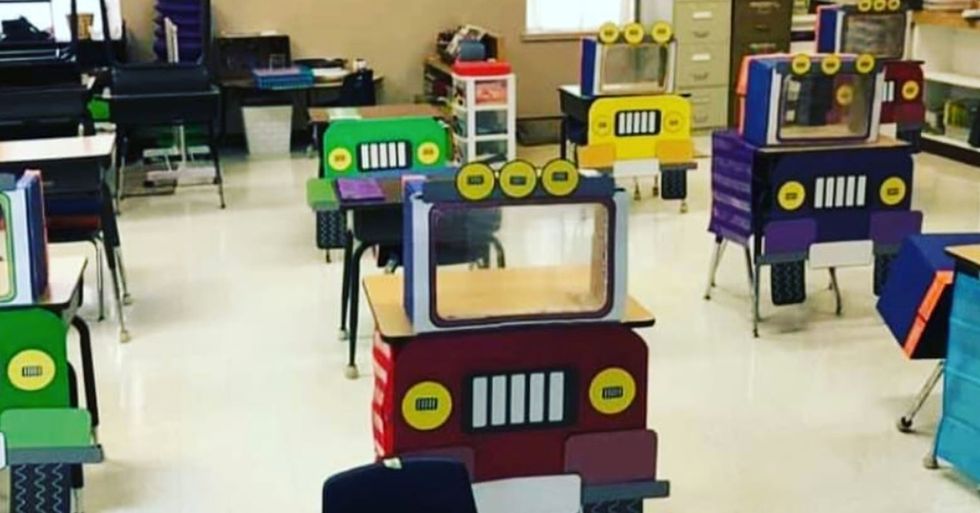 As we slowly start returning back to normality, certain precautions need to be put in place to prevent us from plummeting back to ground zero.

Unfortunately, as schools re-open, they can be a daunting place, particularly for younger children.

So one teacher went out of her way to make her classroom fun rather than scary...

Which can make places pretty daunting, especially for young children returning to school.

That's the reason why one teacher is trying to make her classroom as welcoming as possible for her returning students.

Her bright idea quickly went viral after a photo of her classroom was posted on a popular parenting page.

Alongside the picture, it read "No playing. Masks all day. Six feet apart at all times."

The picture shows desks that are apart and with visors on, but not just any visors.

These visors are car windscreens and the desks have been turned into trucks with a little bit of cardboard and paint.

"School seems like a frightening place when you read about all the safety measures kids will have to adhere to this year" the post continues.

"Thankfully, there are educators, like Jennifer Birch Pierson, a Kindergarten teacher from Texas, who are making lemonade from some very sour lemons and making their classrooms as welcoming and comforting as possible for our littlest learners."

"Check out how she set up her classroom desks to look like a bunch of trucks on the road. She even makes the required desk shields look like windshields."

"Those students who enter her classroom may have a tough time, but clearly they are in the hands of a caring teacher, and that's something all parents can be grateful for."

The idea was a success with the post receiving 20 thousand shares and 10 thousand likes.

Not to mention the praise received in the comments.

One user replied to the post saying "Kudos to this kindergarten teacher. She is helping the children feel ok. God bless her for her big heart and consideration."

And another agreed writing "I've always marveled at the way teachers decorate their classrooms. I bet the kids will just be happy to be there with friends"

That really is a teacher going above and beyond to keep her pupils safe but also happy.

Keep scrolling to find out why these coronavirus conspiracy theorists got arrested...