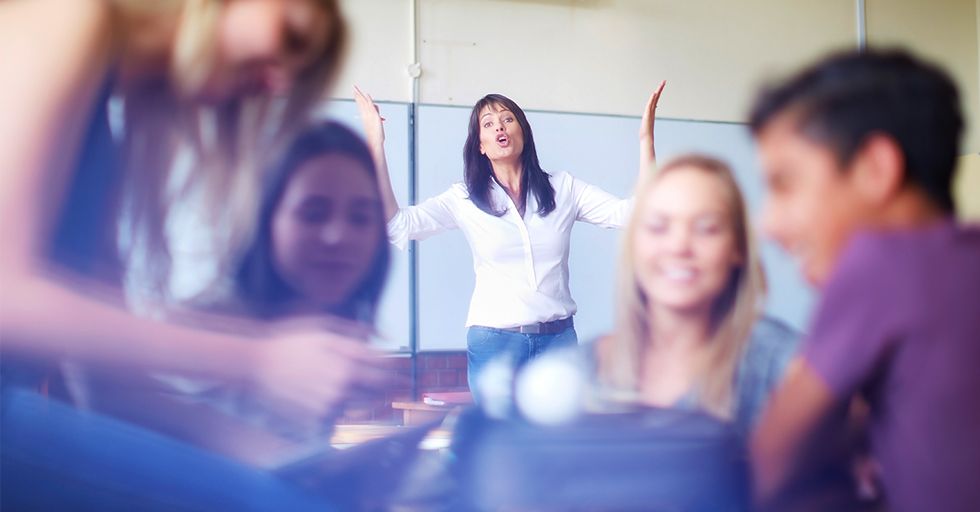 This Teacher's Viral Post About The Frustrations of Teaching is #RealTalk

The New York Times recently ran a story about teachers and all the extra jobs they have to work just to make ends meet in addition to their full-time jobs. Teachers often work in coffee shops, drive Ubers, babysit, tutor, a million different things just to make enough money to live. All of this is in addition to managing classrooms full of kids, planning lessons, grading, and of course, meeting with parents who often don't appreciate how hard the teachers work for their children.

Recently a post from a teacher in Texas went viral, and it made an important point about why teaching is an almost impossible profession: and not just because of the hard work.

It's no secret that teachers are some of the hardest working people in America.

They aren't exactly rolling in cash to begin with, but then you have to consider that in addition to low salaries, most teachers have to buy their own supplies.

Can you imagine walking into your office job only to be told you have to be the one to supply the printer paper and the staples and your own desk chair?

Plus, in addition to buying most of their own supplies, teachers work overtime almost every day, for no extra pay.

And yet, teachers are still one of the most underappreciated profession in America, by the administrations they work for, by parents, and even by the kids they give up everything to teach.

And sometimes, they get fed up.

Even though most teachers got into teaching for the love of it, it's easy to see how it can quickly become frustrating. This was the case for one woman, who wrote a Facebook post about her teaching frustrations that is getting a lot of attention.

Julie Marburger is a teacher in Texas.

She recently posted a Facebook status about teaching that created a stir online.

Her Facebook explained why she was leaving teaching after only two years and included photos of her classroom.

And it wasn't because she didn't love her job.

"I left work early today after an incident with a parent left me unable emotionally to continue for the day. I have already made the decision to leave teaching at the end of this year, and today, I don't know if I will make it even that long. Parents have become far too disrespectful, and their children are even worse. Administration always seems to err on the side of keeping the parent happy, which leaves me with no way to do the job I was hired to do...teach kids."

She included photos of her wrecked classroom and went on to explain why she was leaving.

"I am including photos that I took in my classroom over the past two days. This is how my classroom regularly looks after my students spend all day there. Keep in mind that many of the items damaged or destroyed by my students are my personal possessions or I purchased myself, because I have NO classroom budget. I have finally had enough of the disregard for personal and school property and am drawing a line in the sand on a myriad of behaviors that I am through tolerating. Unfortunately, one parent today thought it was wrong of me to hold her son accountable for his behavior and decided to very rudely tell me so, in front of her son."

But according to her, the problem runs deeper than just rude parents. She continued her post.

"Report cards come out later this week, and I have nearly half of my students failing due to multiple (8-10) missing assignments. Most of these students and their parents haven't seemed to care about this over the past three months, though weekly reports go out, emails have been sent and phone calls have been attempted. But now I'm probably going to spend my entire week next week fielding calls and emails from irate parents, wanting to know why I failed their kid. My administrator will demand an explanation of why I let so many fail without giving them support, even though I've done practically everything short of doing the work for them. And behavior in my class will deteriorate even more. I am expecting this, because it is what has happened at the end of every other term thus far."

She went on to bring up important points about the way we as a society treat teachers.

"I have never heard of a profession where people put so much of their heart and soul into their job, taking time and resources from their home and family, and getting paid such an insultingly measly amount. Teachers are some of the most kind and giving people I have ever met, yet they get treated so disrespectfully from all sides. Most parents can't stand to spend more than a couple hours a day with their kid, but we spend 8 with yours and 140 others just like him. Is it too much to ask for a little common courtesy and civil conversation?"

She shared her heartbreak over having to leave her dream job.

"It has been a dream of mine for as long as I can remember to have a classroom of my own, and now my heart is broken to have become so disillusioned in these short two years. This is almost all I hear from other teachers as well, and they are leaving the profession in droves. There is going to be a teacher crisis in this country before too many more years has passed unless the abuse of teachers stops."

And she wasn't shy about saying what she thought needed to improve.

"People absolutely HAVE to stop coddling and enabling their children. It's a problem that's going to spread through our society like wildfire. It's not fair to society, and more importantly, is not fair to the children to teach them this is okay. It will not serve them towards a successful and happy life."

She was so frustrated, she wasn't worried about the backlash.

"Many will say I shouldn't be posting such things on social media...that I should promote education and be positive. But I don't care anymore. Any passion for this work I once had has been wrung completely out of me. Maybe I can be the voice of reason. THIS HAS TO STOP."

But it resonated with so many people, it was shared widely.

After her post went viral, she followed it up with some updates clarifying her positions.

"UPDATE: Thank you, everyone for your words of support! I'm feeling a little shell-shocked over the attention I have gotten, to say the least. This is something I had no way of anticipating and have taken a few days to come to terms with."

She had no idea how far her post would travel, so she felt it was important to make a few things clear.

"I never intended to be a spokesperson for anything. I'm not the most qualified to do so, and I'm certainly not the best teacher out there, by far. But obviously my words, spoken in desperation that day, have struck a chord with many people. My Facebook Messenger inbox has been inundated with comments from teachers and others worldwide in agreement and support of my post."

She worried that some people may have misunderstood: she doesn't think teaching, parents, or student are all bad.

"If I could have the moment back, I might have said some things differently. For one, I would have pointed out that I have many amazing, hard-working, respectful students who show up every day and give their best and also many supportive, loving parents. For them I am thankful and hope I haven't offended. But my frustration was also in their behalf. Because the actions of some are hindering their educational experience."

But she did have some ideas on what the problems are.

"I believe this post resounded with so many because it speaks to three main issues we must address as a society: First, the education system as we know it needs reform. It is broken and inadequate for our children."

She had more ideas.

"Second, we absolutely have to hold our children to a higher standard of accountability in all areas. Inflating their success doesn't raise self-esteem. If it did, we wouldn't have the highest teen suicide rates in history right now."

"Third, we as a society have to get back to treating one another with manners and respect. We are only going downhill with hatred and name-calling. No one wins when kindness dies."

And after realizing how much she had to say on the topic, she announced she was starting a blog.

"I am a woman of faith and have been quite reflective this week on the good that I can bring to this world because of this experience. I have decided to (as soon as feasible) start blogging my feelings on all of the above and hope many of you will join me in the discussion. If we all work together, we can make the changes we need for our collective success."

Her message really resonated with other teachers, many of whom responded to the post.

The comments of her post were filled with teachers who felt the same frustrations.

Some shared their teaching horror stories.

They were enough to make anyone frustrated.

Many people shared people they knew had left teaching for similar reasons.

Many people felt so hopeless that they thought homeschooling might be the best solution.

But not everyone has the option of or the resources for homeschooling.

Some even told stories about how their kids lost teachers for the same reasons.

And how they didn't blame them.

And some people just shared their sympathies.

Even people who aren't teachers and don't have kids understand the frustration.

After the popularity of the post, Julie started a blog to continue writing about the subject.

You can read it here.

On her blog, she suggests ways parents can help support their children's teachers.

Her ideas include ways to improve communication between parents and teachers, how parents can help in a classroom, and how to get more involved with classroom rules and policies.

Do you agree that our classrooms need reform?

Share this article and help people understand how to respect and support our very valuable teachers.