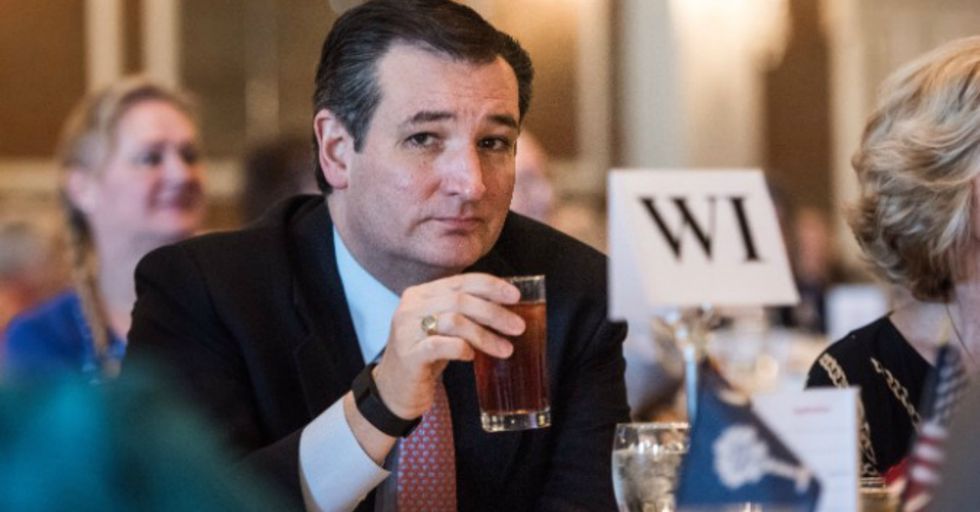 Back when Ted Cruz was running for president, it was easy to find things not to like. We didn't want a racist, xenophobic, homophobic person in charge of the entire country. How the tables have turned!

We do have a racist, xenophobic, homophobic person in charge of the country — but it's not Ted Cruz! These days, Ted Cruz is more entertaining than threatening. Don't believe us? Take a look at his behavior yesterday. The man has completely rebranded.

It seems to have started with some Dr. Pepper.

Yes, you read that right. The greatest soda of all time inspired Ted Cruz to completely change his image.

In fact, that's a direct quote. "I dumped a Dr. Pepper on Senator Cruz," Sasse announced. Everyone laughed at the time, but now we're starting to wonder. Was that Dr. Pepper actually comedy juice?

After the Dr. Pepper news broke, Sen. Sasse tweeted this:

This was, of course, a reference to the unfounded conspiracy theory that Ted Cruz's dad was involved in JFK's assassination.

Not to be outdone, Dad-Joke Teddy responded with this:

That's a cipher from the Zodiac Killer. Who is also Ted Cruz. Well, OK, that's another unfounded conspiracy theory, but WHAT IF?! Also, seriously, what is going on?

People. Are. Freaking. Out.

We've been waiting for him to speak up and tell us he's in on this joke for so long.

Ted Cruz still wasn't done with the dad jokes. Later that very same day, Cruz participated in a debate with Senator Bernie Sanders. At one point during the debate, Cruz told Sanders to relax. Then he fired off this sweet, sweet gem of a "joke":

"As some might say, 'curb your enthusiasm,'" he said. "By the way, the impression Larry David does of you is spectacular and uncanny." Whaaaaat? That one is a reference to the fact that Larry David (creator and star of the HBO show Curb Your Enthusiasm) has impersonated Sanders on SNL. So, yeah. Ted Cruz is clearly trying his hand at comedy. And it's not going super well so far. We hope he keeps at it, though! The world could use some laughs.