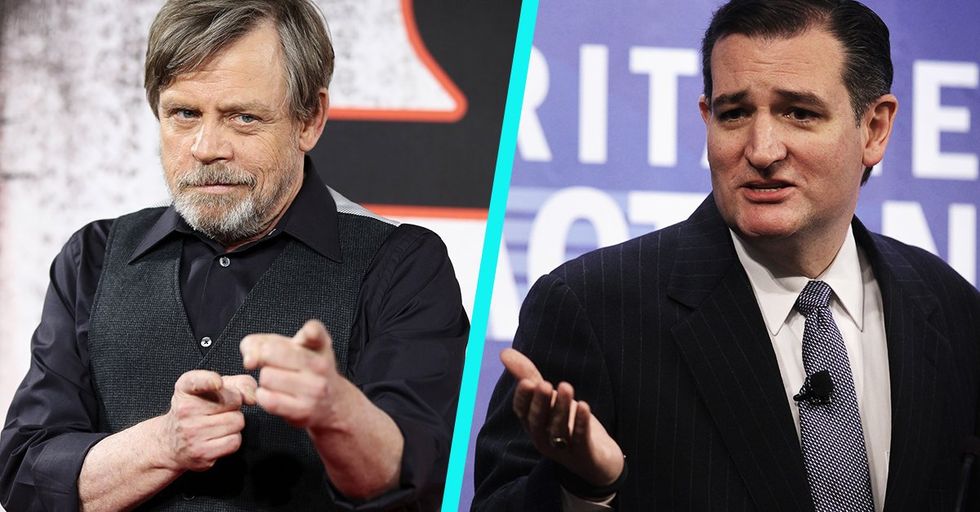 We all know by now that Ted Cruz is bad at doing things. Well, he upheld that long-standing tradition yesterday when he tried to touch lightsabers with Luke Skywalker himself, Mark Hamill, over the issue of net neutrality.

The two dueled on Twitter, and guess who lost? Yeah, it was Ted Cruz.

You may be aware that the FCC just voted to strike down net neutrality, which currently allows you to visit websites like this one without having to pay.

Without net neutrality, you may be forced to shell out several dollars to check your own Facebook timeline, and if that's the case, you might as well just be dead. But people like Ted Cruz are convinced that free Internet is the real evil. Good thing Luke Skywalker is around to fight the good fight.

Mark Hamill, the actor who portrays Luke Skywalker in the Star Wars movies, bashed FCC Chairman Ajit Pai after Pai posted a video of himself holding a lightsaber and celebrating the end of net neutrality.

"You are profoundly unworthy 2 wield a lightsaber — a Jedi acts selflessly for the common man — NOT lie 2 enrich giant corporations." Luke Skywalker is not messing around.

Net neutrality is a hot-button issue for people, so we were sure there'd be some Republican who wouldn't be able to resist responding to Luke.

And BOOM! There it was. Ted Cruz took the bait and responded with this mess of a "comeback":

There are several problems with this tweet. Chief among them is that Cruz tagged the wrong Mark Hamill. The Hamill who plays Luke only has one "m" in his last name. The second and most egregious problem is that Ted Cruz, the unlikable Senator from Texas, is trying to out-Star Wars actual Luke Skywalker.

Needless to say, Mark Hamill a.k.a. Luke Skywalker wasn't going to take this injustice lying down.

You simply don't challenge Mark Hamill. Especially if you're Ted Cruz. Mark Hamill clapped back at Cruz with a truly devastating response...

That little red heart at the end? Yeah, it's sarcastic.

Thanks for smarm-spaining it to me @tedcruz I know politics can be confusing, but you'd have more credibility if yo… https://t.co/WEeb4fAYJm
— Mark Hamill (@Mark Hamill)1513538541.0

We're positive Ted Cruz thought he was being clever and hilarious. Alas, he sooooo was not.

And Mark Hamill, the lead character in one of the most iconic movie franchises of all time, swiftly put Ted Cruz in his place. The Force is definitely with him.

Even though he was clearly bested, Cruz just couldn't let it go.

He did apologize for misspelling Hamill's name, but then he tried to come at him again with a Star Wars quote. And not only that, but he had the audacity, the gall, to split his response into two tweets.

Does Ted Cruz really think we want to read double the words from him? Nevertheless, he persisted:

He kept trying to throw out facts, but as we already know from the previous eight slides, Ted Cruz is wrong about and bad at everything. The dismantling of net neutrality is about taking access and free education away from the masses and putting more money in the pockets of giant corporations.

You know that. We know that. Luke Skywalker knows that. And we suspect that somewhere, deep down inside, Ted Cruz does too.

To answer your question, Ted, it's Mark Hamill. Luke Skywalker is much more handsome than you. Much wiser. Even Vader wasn't as evil as you are. And he did a bunch of bad stuff. If you don't know what he did, you can look it up. But maybe not for long.