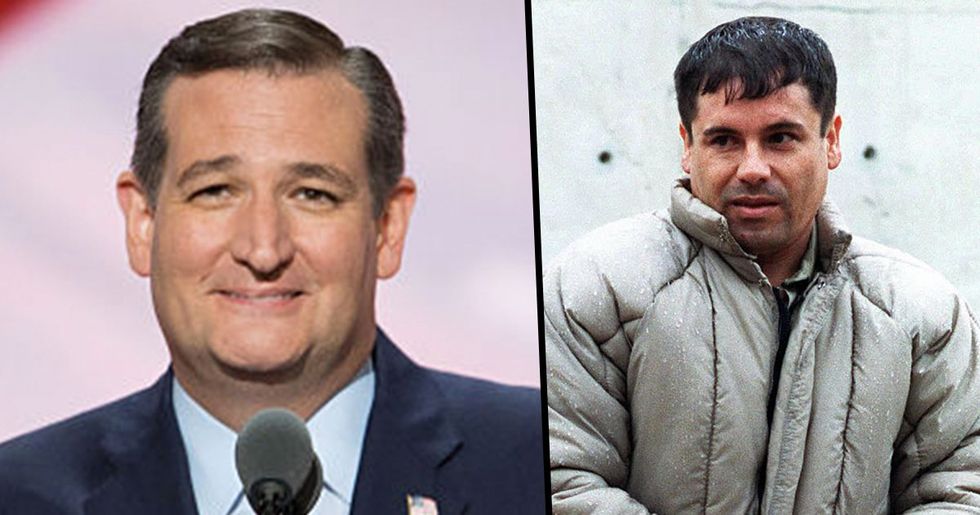 Trump's border wall has been a seemingly unending source of contention in the US, with government actually shutting down for over a month thanks to the dispute. And it seems things are only going to continue in the same trajectory, as senator Ted Cruz has added his opinion into the mix this week.

Cruz, who was the runner-up to President Trump for the Republican nomination in 2016, has voiced his support for Trump's controversial border wall. Cruz has also offered a rather unique solution to the small matter of the wall's cost - which was the initial reason for the government shutdown of last month.

Cruz has suggested that there's an untapped source of cash, ready and waiting for the wall building to go ahead. He claims money from recently arrested cartel leader Joaquin Guzman aka 'El Chapo' should go towards the project. But the internet is pretty skeptical as to the viability of this idea.

The Mexico-United States Barrier has long been a political issue.

While some support securing the US border, the idea of a physical barrier has always been extremely controversial.

When current President Donald Trump ran for office, one of his primary messages was based around building a border wall.

He claimed he would build the wall, and that Mexico would pay for it - a statement vehemently denied by the Mexican President.

Since his election, though, Trump has not backed down.

In January of 2017, Trump signed an Executive Order which formally directed the beginning of the border wall's construction. Trump wanted to use existing federal budget to pay.

The lack of clarity over the funds caused a full government shutdown.

The federal government refused to fund the massive expense of the wall, and Trump refused to let it go.

This government shutdown lasted for over a month.

From December 22nd, 2018 until January 25, 2019, an enormous number of federal government workers were unable to work.

The shutdown ended with Trump still unclear about how the wall would be paid for.

Although the idea of the border wall is still very clearly at the forefront of both President Trump's and a majority of Republicans' minds.

The latest Republican to throw his hat into the ring?

United States Senator Ted Cruz, of course. Cruz is best known as the runner-up for the 2016 Republic Presidential nomination.

Cruz, too, is in support of the controversial (and some would say, racially problematic) border wall.

He's also known for something quite weird.

During his Presidential campaign, the internet started a bizarre joke about Cruz being the Zodiac Killer, a US serial killer who was never caught. In a strange turn of events, Cruz tried to get in on the joke last Halloween.

However, the internet wasn't having it.

If you have to pretend to be a serial killer in order to appear more likeable, it may be time to rethink your political policies.

But now Ted Cruz has piped up on a more topical matter.

One February 12th, Cruz took to Twitter to offer his innovative (though slightly out-there) opinion on how the USA could afford this border wall.

He shared his view on where the extra budget could be found.

Cruz claimed that there is a valuable (and, as yet, untapped) source of cash for ny number of Trump's pricey projects.

Cruz first started talking about his Ensuring Lawful Collection of Hidden Assets to Provide Order in 2017, but just recently brought it back to the media's attention.

This is because of the recent conviction of Guzman.

Guzman was found guilty on all counts, including conspiracy and drug trafficking, and now faces life in prison.

Cruz expanded on his views in a think-piece in the Washington Post.

He writes, "With Democrats and Republicans locked in a staring contest over border security, there’s a solution here that secures the border and won’t cost the taxpayers one dime: Let’s build a wall, and make El Chapo pay for it."

There's no denying that Guzman is a bad man.

In fact, in 2015, the criminal proudly claimed, "I supply more heroin, methamphetamine, cocaine and marijuana than anybody else in the world," in an interview with Rolling Stone.

Guzman is worth millions of dollars.

Which Cruz claims the US Government now has a right to. "Criminal asset forfeiture can occur after a conviction in a variety of circumstances; when a criminal has used a building, car, or secret fund to conduct illegal activities, the government can take it away." Cruz claims.

And since the question of budget has been so incendiary, this seems like an obvious solution.

Cruz goes on to say, "No matter what fraction of El Chapo’s holdings the federal government manages to seize, it will put a dent in our nation’s border security bills without affecting any funds currently going to victims or law enforcement."

However, the issue of the border wall is not so simple.

The fact that Trump has so vehemently promised it without ever giving a thought to funds worries some. Others think it'll be largely ineffective and a waste of money.

And that's without even getting started on issues of racial discrimination.

For many, it seems Cruz is providing an oversimplified solution to a complex and convoluted problem.

Cruz has been doubling down on what he clearly thinks is a genius idea.

His message couldn't be clearer. "Congress has two clear mandates from the American people: secure the border and save money. So let’s build a wall, and make El Chapo pay for it."

However, some don't see his point of view.

Comedian Chelsea Handler was one of the first to speak out in opposition to Cruz's El Chapo plan.

Because it seems he may not have looked into the legalities.

For example, can the US Government just take millions of dollars from an individual, and use them however they see fit?

Once the government seizes funds from one person, it could begin a slippery slope which the USA don't really want to go down.

Others pointed out this irony.

All jokes aside, though, it's not as if Guzman was taking advantage of a totally open border at the time. So there's no real way to predict what a border wall could achieve.

Some speculated that it looked as though Trump didn't properly understand what he was talking about in this clip.

Trump likes to show off his exceptional wealth, and it seems he's the one who feels most passionately about the border wall. Surely, by putting two and two together, he could just pay for it himself?

Regardless of the government seizing of private funds, some had another issue.

Many view the wall as a waste of money, even if that money comes from a slightly shady source. Indeed, there doesn't seem to be a shortage of projects the government could invest in over the wall.

Of course, there were some good old classic Twitter reactions.

This one, comparing the Senator to an elephant shrew, is part of the grand internet tradition of mocking those in positions of power. Also, he kind of does, right?

Either way, it looks like Cruz's plan has been met with a more mixed reaction than he anticipated.

And the saga of the US border wall rages on. We'd be curious to see what happens next if it wasn't all so problematic.