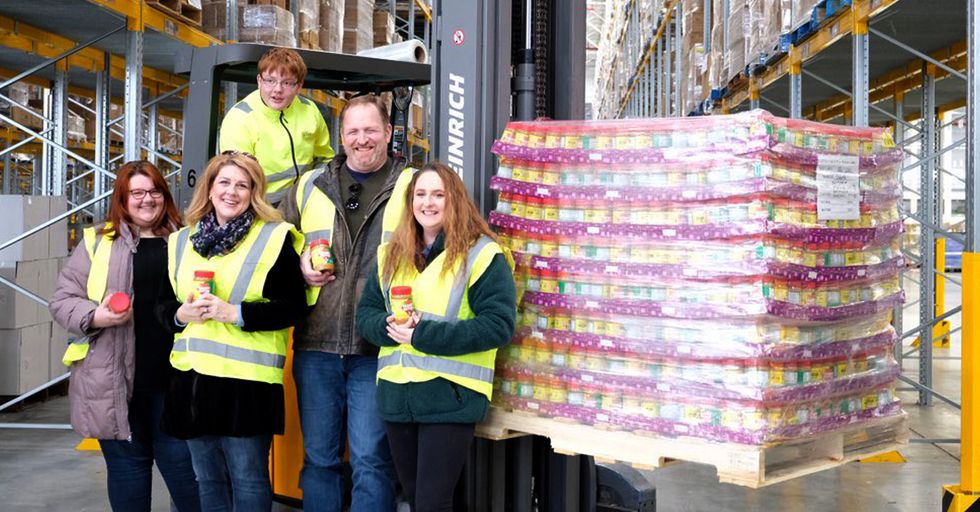 Peanut butter has a lot going for it. It’s got a ton of protein, you’re totally allowed to eat it straight out the jar with a spoon, and it’s part of the most well-known food friendship of all time — the classic peanut butter and jelly. Now, with the help of a very generous PB aficionado, the salty-sweet snack food is also feeding furloughed government workers in their time of need.

When McKay beat the odds and won more of the spread than he could ever eat alone, the teen immediately knew what to do with his surplus. Now, McKay and his family are donating jars of peanut butter to federal employees who went unpaid during the 35-day government shutdown.

This is Eric McKay, but friends call him Bean.

Bean is a 15-year-old in Virginia with autism, and he probably loves peanut butter more than you.

Its smooth texture is comforting for Bean.

According to Bean’s mom, Tracy McKay, the reliably satisfying snack is part of a curated diet that helps her son manage his symptoms.

People with autism can be sensitive to certain tastes and textures.

Limiting a diet to a few staple foods can make things easier, and the smooth texture of peanut butter makes it one of Bean’s all-time favorites.

Bean eats PB&J’s for every meal, so he empties a jar pretty quickly.

Obviously, his mom buys in bulk.

When the spread was on sale for 78 cents a jar, Tracy bought 72 jars to make sure they’d be stocked up for a while.

But their supply started running thin.

It’s bound to happen when you’re going through a jar every three days.

Money was getting tight.

Another casualty of the Donald and Mitch Shutdown Show: Not only are contractors not getting paid, but their healt… https://t.co/Gpuz9jT1SK
— Barbara Boxer (@Barbara Boxer)1548180120.0

When Bean’s dad was furloughed during the government shutdown, things started to get tough for the McKay family.

He went without pay for over a month.

During what was ultimately the longest government shutdown in American history, Bean’s dad and federal workers across the nation didn’t know when to expect another paycheck.

They were on a shoestring budget.

With four teenagers to feed and no income, the McKays struggled to make ends meet with limited savings during the furlough.

Bean had numbered each jar, so he knew they were coming up on the last one fast.

He wanted to help the family stock up again, on a budget.

So Bean tweeted at the local grocery store, Lidl, and asked when the next 78 cent jar sale was coming up.

Instead, the store presented Bean with a challenge.

Lidl replied and told Bean they’d give him a lifetime supply of peanut butter – if he got 72,000 retweets.

He didn’t expect to reach the goal.

Bean accepted the challenge but didn’t think he’d get nearly enough retweets with the five Twitter followers he had at the time.

But his mission was met with a surprising amount of support.

After a couple of months, the tweet had reached nearly 40,000 retweets just through organic shares from friends and family alone.

Then it started getting some high profile attention.

The British author didn’t just retweet Bean, he talked about the teen’s autism and urged them to share the post.

A long-time advocate for autism awareness, the author also shared insights about Bean’s food sensitivity and inspired empathy among his 2.5 million followers.

The efforts helped him reach his goal.

By early January, Bean had amassed 76,000 and over 2,300 followers, and a lifetime supply of peanut butter.

The store gave Bean 72 jars on the spot.

He also got a special “peanut butter card" to stock back up whenever, forever.

Bean officially had more peanut butter than he’d ever be able to eat.

And he knew immediately what he wanted to do with it.

I’m giving away some of my peanut butter, and if you are furloughed like my dad you can have some. I hope my dad i… https://t.co/PlzHs4YAAU
— Philosopher Bean (@Philosopher Bean)1548103078.0

With his own father furloughed, Bean knew firsthand how hard the shutdown had been for federal workers.

He didn’t have money to give, but he did have peanut butter.

The family worked with Lidl to donate over 1,800 jars of PB to furloughed workers.

His actions have inspired hope.

@BeanPhilosopher is sharing his @LidlUS #BeanutButter with other families who are furloughed. We'll all be at the… https://t.co/LB15CYikoP
— Tracy M (@Tracy M)1548185858.0

Bean’s generosity is a bright light of optimism in an otherwise difficult time for many Americans.

Some feel Bean represents the ideal.

@shomaristone @BeanPhilosopher This is the America we all want and need!
— LINDA RIGSBY (@LINDA RIGSBY)1548331983.0

Others feel he did what government representatives wouldn’t.

Wherever your political affiliations lie, we can all agree that Bean is champion.

He does run a solid campaign, and shows great leadership skills.

Politics aside, Bean is the best.

His first instinct after winning his favorite thing was to share it. If that’s not an angel…

His actions are especially touching for others with autism.

Many were grateful for Bean’s representation of the autistic community.

And he’s planning even more giveaways.

Though the shutdown is over (for now), it will be a long road back to financial stability for many federal workers. Bean and his family want to offer all the support they can.

Bean is really just happy he could help.

My dad says he might be able to go back to work Monday! We’re still going to share peanut butter on Saturday. Noon… https://t.co/2Qsm8iFuA6
— Philosopher Bean (@Philosopher Bean)1548452978.0

He’s excited to see his father and other federal workers get back on their feet.