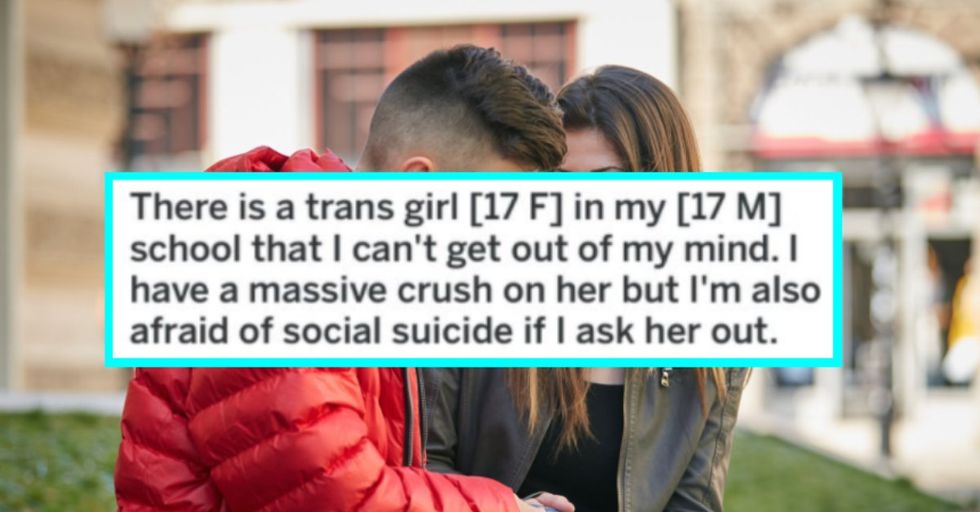 Reddit claims to be the front page of the Internet, but we all know that it can also be a giant cesspool of negativity and weirdness.

Every once in a while though, Reddit affords us a truly lovely, heartwarming tale, and this is exactly one of those instances.

Twitterer Eric Francisco brought the adorable story to our attention.

Lots of people go to Reddit for advice. Here, a 17-year-old boy is asking for advice about how to ask out a trans girl at his school who he has a major crush on. As Francisco points out, the kid is actually a great writer, which just makes this all the more precious.

Here's his story in full:

"I can't even begin to explain how absolutely and painfully beautiful this girl is," the lovesick puppy writes. But he recognizes that he might make things very hard for both of them if he just straight up asks her out. Unfortunately, trans folks still face a lot of prejudice and discrimination. High school is already an adolescent nightmare, and this only complicates things further.

But this boy is head over heels for this girl, as he so eloquently continues to explain:

"She's so talented," he wrote. "It was portrait week and we got paired up. We did each others [sic] portraits and it was MAGICAL. It was like a Jack and Rose moment, except nobody was naked and neither of us died." This kid is so deeply in love with this girl, and he has a sense of humor! He's a keeper.

He said he's asking for advice because he knows the second "word spreads" about them hanging out with each other, his friends will treat him terribly. "I couldn't be friends with people who make fun of my girl friend," this knight-in-shining-armor wrote.

His older sister advised him not to ask her out to avoid drama, but his little brother had the best advice: "Bring her flowers to school on valentines day because he bets no other guy has given her flowers before."

Are you just melting into a puddle on the floor? We'll wait while you pull yourself together.

Obviously, this is a tough situation for a teenage boy, and so he turned to Reddit for advice. Although the post was eventually deleted for weird Reddit reasons, the Internet came to his aid with an avalanche of reactions and advice...

Pretty much everyone fell in love with this 17-year-old boy for how much he's in love.

The story is just so damn adorable. In a subsequent comment, someone asked him if he knew what her "private part situation" was, and his response was just perfect: "I have no idea about her private parts," he wrote. "At this point I feel like even if Gollum lived in her pants I'd somehow find that cute. "

Needless to say, everyone wants to know how things end up. We are all rooting for this kid.

Of course, some came to the table with blunt advice:

The truth of the matter is, this isn't going to be easy. Chances are, going public with this girl will lose him some friends. As unfortunate and unacceptable as that is, that's the reality we're living in right now. And as this Twitter user points out, anyone who would dump a friend for dating a trans person isn't a real friend to begin with.

Anyone who read this story became immediately and entirely invested. Obviously. How could you not?

The urge to protect this teenager in love was strong with the Internet.

This could be viewed as a sad story about the state of our world, but most people chose a more optimistic outlook. Someday, we'll live in a world where teenage boys can be in love with whoever they want without fear of judgment, and I think that day is coming faster than it might seem.