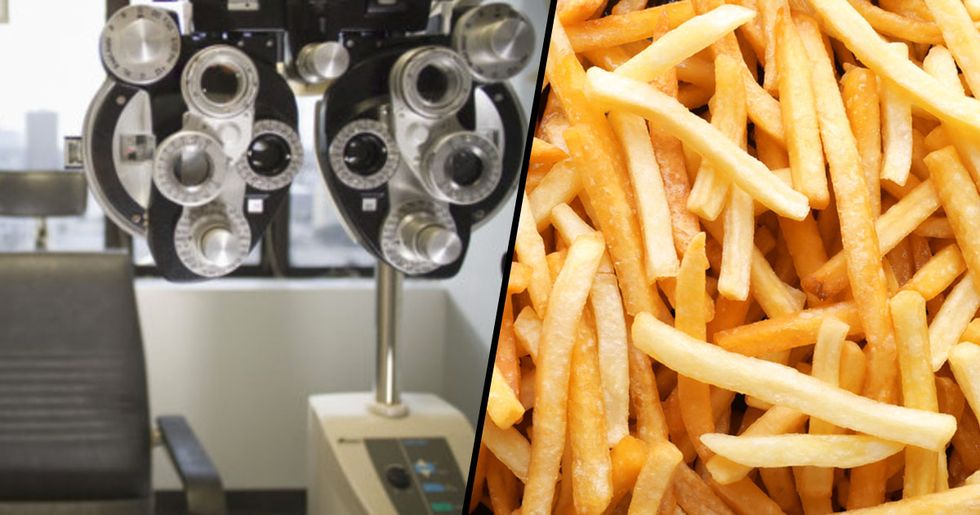 There are plenty of fussy eaters out there, and it's often something people just adapt to and learn to live off. Many people dislike certain foods for taste, texture, or even for what goes into the food itself.

Sadly, hundreds of thousands of people around the world suffer from eating disorders that massively impact their day-to-day lives.

One teenager from the U.K has discovered the damaging effects of maintaining a poor and nutritionless diet from his eating disorder by losing nearly all of his sight and hearing. Keep scrolling to learn more...

What we put into our diets is vital for our health.

Good nutrition is the key to a long and healthy life.

According to the HHS (U.S Department of Health & Human Services), even for people at a healthy weight, a poor diet is associated with major health risks that can cause illness and even death.

But many disregard this scary statistic...

Adults who are considered obese are at a high risk of suffering from numerous health risks and diseases...

These include heart attacks, heart disease, strokes, mental illnesses, some forms of cancer, and type 2 diabetes.

So when it comes to fussy eaters...

It is super important that these individuals ensure they are getting the correct vitamins and nutrition in order to maintain a healthy lifestyle.

But eating disorders can get in the way of maintaining a healthy diet...

Avoidant/Restrictive Food Intake Disorder (ARFID) is an eating disorder that is characterized by the person completely avoiding certain foods or food groups.

The reason for avoiding certain foods can vary on the individual...

They may be extremely sensitive to the taste, smell, appearance, or texture of food, or may even only eat foods of a certain temperature.

Some may have a much more distressing experience when it comes to food...

Certain individuals begin choking or vomiting when they get near food which can trigger anxiety and fear around the notion of eating. But in many cases, people who suffer from ARFID don't realize that they have a disorder and simply stick to eating the only food groups that they will go near.

ARFID can often look like just a fussy eater...

It is important for individuals to be diagnosed with the eating disorder, rather than simply being branded as a picky eater. Diagnosis can lead to help and resolutions towards the disorder which can ultimately save a person's life.

A teenager from the U.K has recently realized the damaging effects of his disorder...

The seventeen-year-old, who remains anonymous, is from Bristol in the U.K and has suffered from ARDIF since being a young boy.

The young man couldn't tolerate the texture of fruit and vegetables...

When he was forteen-years-old, he was taken to his GP complaining of tiredness, but he was simply branded a fussy eater and was declared relatively healthy despite his consistent diet of nothing but white bread, chips, french fries, and some forms of processed meat.

But the boy slowly began deteriorating after his visit...

Since the age of fifteen, his hearing began dwindling - and as did his vision.

The teenager is now legally blind and is nearly completely deaf...

His poor diet caused him to suffer from nutritional optic neuropathy which in his case has left the fibers in his optic nerves so badly damaged that they can never be repaired. The sad reality about this young man's case is that if the condition is caught early, it can be fully treated.

The teenager's mom has spoken about the ordeal anonymously...

Speaking to The Guardian, she said about his childhood: "The first we knew about it was when he began coming home from primary school with his packed lunch untouched."

The teenager was the only one in his family to have an eating disorder...

"I would make him nice sandwiches – and put an apple or other fruit in – and he wouldn’t eat any of it. His teachers became concerned, too," she went on to say. "His brother and sister have never stopped eating. They love everything. He has always been skinny, so we had no weight concerns. You hear about junk food and obesity all the time – but he was as thin as a rake."

His life has been turned completely upside down since the diagnosis...

"He has no social life to speak of now. After leaving school he got into college to do a course in IT. But he had to give it up because he could not see or hear anything," his mom explained.

His mom is now his full-time carer...

"He would love a job, but he has not been able to find anything he can do. I had to quit my job in a pub. I now look after him full-time. He is taking vitamin supplements, but his diet is still pretty much the same," she went on to say. "When he was having counselling we managed to start him on fruit smoothies. But he’s gone off those now."

Professionals quickly realized his diet was the cause...

Dr. Denize Atan, who treated the teenager at Bristol Eye Hospital, also spoke to The Guardian and said: “He had a daily portion of fries from the local fish and chip shop and snacked on Pringles, white bread, processed ham slices, and sausage.

This was beyond a case of simply not wanting to eat certain foods...

Should this have been dealt with years ago?

The teenager's mom insists she didn't realize the extent of his poor diet, but shouldn't any parent be concerned when their child has never consumed fruit or vegetables in their lives? The doctors found out that the boy was severely malnourished, which will have come from years of lack of nutrition. At the end of the day, it is a parent's responsibility to ensure their children are either eating well or receive professional help if they are not. To learn more about the struggles of eating disorders, keep scrolling...