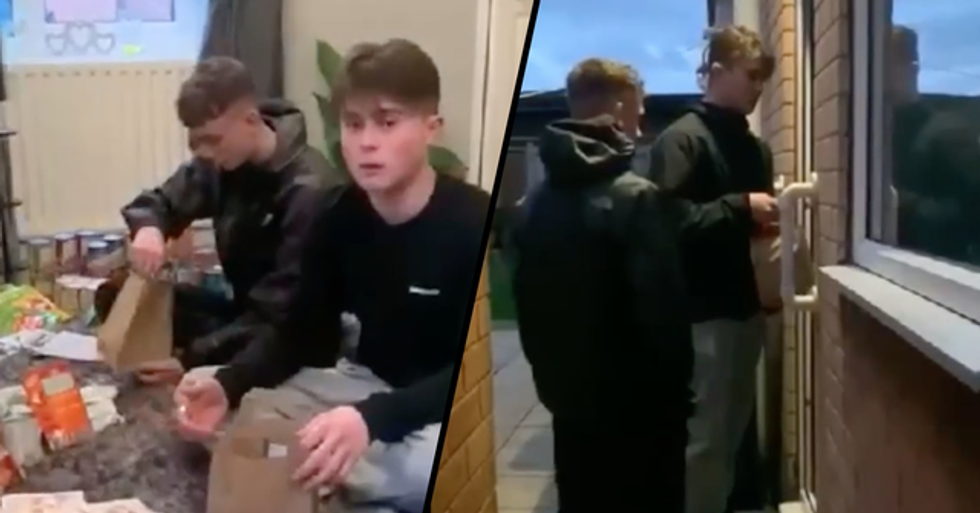 A pair of kind-hearted teenage boys have gone viral after they selflessly made care packages full of household supplies for the elderly residents quarantined in their neighborhood.

Keep scrolling for the full story, and to hear their heartwarming reason behind the gesture...

In today's day and age, the kindness of strangers has never before been so valued.

We are currently in the midst of a medical pandemic and now, we are relying on each other more than ever before.

Originating in Wuhan, China, the deadly virus, COVID-19 is currently sweeping the planet at an alarming rate...

And it is showing no signs of slowing down.

As a result, various world leaders have been forced to impose lockdowns upon their countries.

And millions of people all over the world are now quarantined in their homes.

The virus is spread notoriously easily...

Through human contact, primarily. So remaining indoors and away from other members of the public has been deemed as the most effective method of slowing down the spread.

Yet, while most people have been calmly abiding by the recommendations to self-isolate...

Others have been descending into mass hysteria and rushing to their local supermarket to stock up on supplies.

Apocalyptic scenes have been emerging from supermarkets all over the world.

People have gone into full panic mode and have been hurridly, and rather selfishly, stockpiling and hoarding various supplies such as toilet paper, canned goods, and bottled water.

And, as a result, the shelves have been stripped bare.

In their blind panic, frenzied shoppers have been taking most of the groceries for themselves, meaning there is quite literally nothing left for others.

Things have been getting seriously out of hand.

Conditions are now so ridiculous that many supermarkets have been forced to impose regulations that restrict how many items shoppers are allowed to buy. Yeah, this is the world we're living in.

These shoppers seem to be forgetting that other people need to buy their groceries too.

Over the last couple of weeks, more and more photos of elderly shoppers stood in deserted aisles have been emerging.

It's the heartbreaking reality of stockpiling...

That those who are elderly and more vulnerable will be left with empty shelves.

Many elderly citizens have now been left in a desperate situation.

But, luckily, 2 kind-hearted teenagers have decided to give a helping hand.

Best friends, Matty and Sam, are doing something incredible for the elderly people in their community.

The thoughtful seventeen-year-olds, both from the Sheffield, England, are working together to give out their own little "care packages" amid the coronavirus outbreak.

The boys have collected a variety of household items...

Such as toilet papers, porridge sachets, tea bags, and aspirin.

The friends were inspired after a trip to their local supermarket.

Sam recalled: "We went to our local Asda and we seen [sic] an elderly gent actually just struggling to find the necessities... And it really struck me because I really don't want my grandma or grandad - Or anyone's grandma or grandad - to be going through things like that."

After seeing the elderly man struggling in the supermarket, the boys decided to do something about it.

"We really wanted to take it into our own hands."

Incredibly, they now go around the houses of the elderly residents in their neighborhood...

And drop off their homemade care packages in person.

And, when asked on whether other people should be doing the same, Sam replied:

"I really advise people to do it if you're actually able to and if you're willing to do it. Because I think, at this moment in time, we really do need to pull together as a community, and really support each other in vulnerable times like this."

They believe that now, more than ever before, we need to be looking out for those who are more vulnerable.

"We need to support the vulnerable and less fortunate people who are struggling to get to the shops."

Their interview was quick to go viral and has now been viewed more than 7 million times.

And millions of people have flooded to social media to praise the kind-hearted young men. You can watch Sam and Matt's story above. For more heartwarming stories that have emerged from the otherwise bleak and frightening coronavirus pandemic, keep scrolling to read about how quarantined Italians are keeping their spirits high...