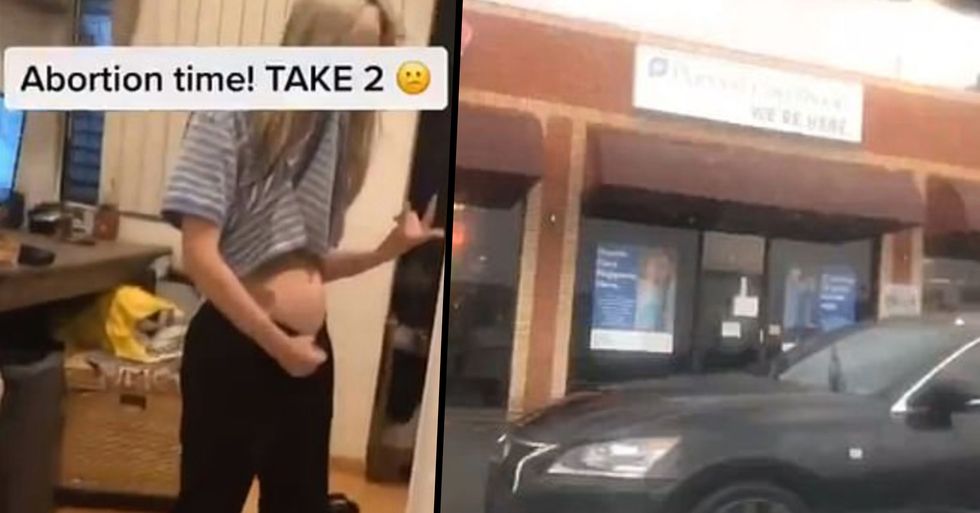 Teen Brags About 'Getting Her Second Abortion' in 'Disgusting' TikTok Video

The topic of abortion is a sensitive and extremely divisive one. It's a topic that sparks protests from both pro-life and pro-choice activists and remains a relevant issue.

But there's one thing that we can all agree on - it's not something to joke about.

Keep scrolling to see the video that has divided the internet...

Here in the U.S. the right to safe and legal abortion has been the law of the land for more than forty-five years and is a part of the fabric of this country. Brett Kavanaugh’s confirmation to the Supreme Court dealt a huge blow to our right to access safe, legal abortion, however. Kavanaugh was nominated by President Trump, who had previously made a clear promise to nominate judges who would “automatically" overturn Roe v. Wade.

And, of course, the Alabama abortion ban sparked huge outrage and controversy...

On May 14 2019, Alabama legislators passed a bill banning abortions. The passing of this bill has triggered an outcry across the world, with millions standing forward in support of women’s rights. Republican, Governor Kay Ivey, said after signing the bill: "The bill stands as a powerful testament to Alabamians’ deeply held belief that every life is precious and that every life is a sacred gift from God."

4 other states have imposed a similar bill...

It can feel as though we're going backwards...

And there are still so many people who don't think women deserve the right to a safe abortion.

There is still a huge stigma attached to the topic.

There seems to be no middle ground...

Often they will protest outside abortion clinics...

This is a hugely serious topic...

And it's certainly not the kind of thing you joke about.

But it seems that this foolish teenager has decided to poke fun at the topic...

The video showcasing "Ashley's second abortion" has now been deleted...

But with the internet being the internet, many screen-recorded the monstrosity and it is truly repulsive.

The video begins with Ashley mock crying and holding her stomach...

And it then jumps to show her poking her stomach out before it jumps again to show the front of a Planned Parenthood in Pasadena, California.

After filming a couple sitting quietly together in the clinic...

The camera then pans to Ashley dancing - with it being captioned, "there's two abortion moods."

This is not only disgustingly offensive...

But it truly goes to show how immature and ridiculous this teenager is.

The clip then shows Ashley undergoing an ultrasound - all whilst still giggling childishly...

And it is currently unknown as to whether she underwent the procedure or not.

Lila Rose, president of the pro-life group Live Action, shared the video before her account was locked for violating the platform's rules...

And while many agreed with what Lila had to say about how the young girl's video should hopefully end the brainwashing around "dehumanizing and killing babies", many also disagreed.

Many are standing behind women having a right to choose what they do with their bodies...

"Whilst the video is distasteful to say the least, the rights of the mother must always come before the rights of the fetus... Pro-Choice is not brainwashing. It's giving someone their basic human right- freedom. Freedom to make their own choices about their own life," one user wrote.

And quite frankly, this video is completely disrespecting that...

You can watch the video here, but we must say, its content is not only disrespectful, but it is also very upsetting. Keep scrolling to learn about the anti-abortionist who got completely shut down in a brutal text...