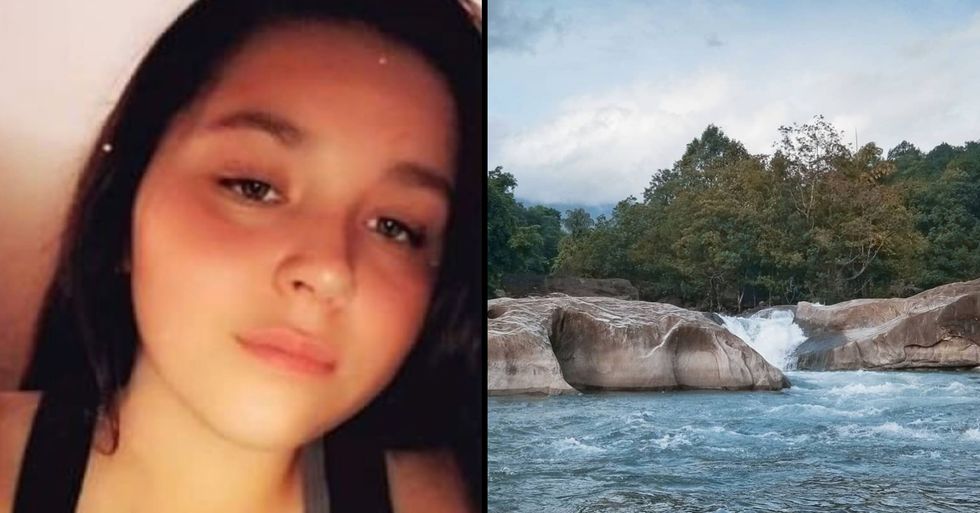 A teenager has tragically lost her life after saving several children from a treacherous swimming spot in North Carolina.

Her heroic actions cost her her own life...

As fun as it can be swimming in open waters...

The dangers of doing so are inevitable.

Many swimmers are completely unaware of these dangers...

And even the most experienced swimmers have lost their lives while swimming in open waters... not to mention children!

Children, of course, are at the highest risk when swimming in these kinds of waters...

And tragedy can strike at any moment.

Being in open waters is completely different to being in a swimming pool.

There are many different hazards of children swimming in open water, and one of these is limited visibility. Water in lakes and ponds can be murky, hiding hazards such as rocks, logs, and uneven surfaces. Limited visibility can also make it difficult to see if a child falls in.

Another hazard is depth, distance, and drop-offs.

Unlike a pool, open water rarely has depth markings, making it difficult to know if kids are getting into water that is over their heads.

Currents and tides in rivers, lakes, and the ocean can be fast-moving and can come out of nowhere...

Meaning that families swimming in these kinds of waters should remain in shallow areas and be under constant supervision. Riptides and strong currents can be deadly.

Despite this terrifying fact...

People continue to swim unassisted in these open waters and a recent tragic event has certainly proven the dangers of strong currents.

On August 17th, a group of children was swimming in a river near a dam on Clearwater Lake in Leonard, northern Minnesota.

However, it didn't take long for the children to begin struggling thanks to an unexpected spot of turbulent water.

This came out of nowhere.

"Some of them were caught up in the turbulent water that was coming over the dam," Clearwater County Sheriff’s Office explained in a Facebook post.

The area has experienced a lot of rain in the last few weeks...

"The water level at the dam was considerably higher due to the large amount of rain received recently," they then clarified.

The children's cousin, Eighteen-year-old Raina Lynn Neeland was, nearby when they started to struggle...

And without thinking, she went into the water to try and retrieve her 10-year-old, 8-year-old, and 6-year-old cousins, according to Kare11.

The teenager was successful at first...

According to eyewitnesses, she pulled her 3 cousins - one of which was revived to consciousness - to safety until disaster struck.

Raina was sadly pulled under the strong current when she got her cousins to safety.

Deputies from Clearwater County Sheriff’s office, members of the Clearbrook Fire Department, and Bagley Sanford Ambulances arrived at the scene and took over the diligent efforts of bystanders, some of whom had retrieved and were trying to revive the unconscious teenager when she was pulled to shore.

Witnesses said that she had been under the water for around 10 minutes...

And despite the valiant efforts to revive her, Raina was sadly pronounced as dead shortly afterward.

Messages of condolences have been flooding in for the young woman...

And Raina has been hailed as a hero.

Her heroic acts were unbelievably selfless...

And she was thinking of nobody but her 3 cousins when she went into the dangerous waters.

She did not deserve this untimely ending...

And as this social media user pointed out, the world needs more people like her.

She will never be forgotten...

And despite the pain they will now be feeling, her cousins will be thankful to Raina for her selfless actions.

Of course, her family has been left completely broken by this terrible loss.

"Raina jumped in without hesitation and pulled three little ones out and kind of threw them out to the bank," her uncle, Jeremy Neeland, told KSTP. "She’s one of a kind."

Raina's family has set up a GoFundMe page to raise funds for the teenager's funeral costs.

The page reads: "Raina was loved by her family and friends. Raina loved cooking with her grandma also she loved helping take care of her siblings and cousins. Raina drowned saving her younger cousins. All help will be going to help pay for all costs associated with her funeral and my family with everything. Sorry, I'm not great at talking about being in need but right now as we are all hurting from this loss of one of our young family members."

And we hope that this will help Raina's family organize the funeral that the heroic teenager deserves.

Our deepest condolences go out to her family during this awful time.