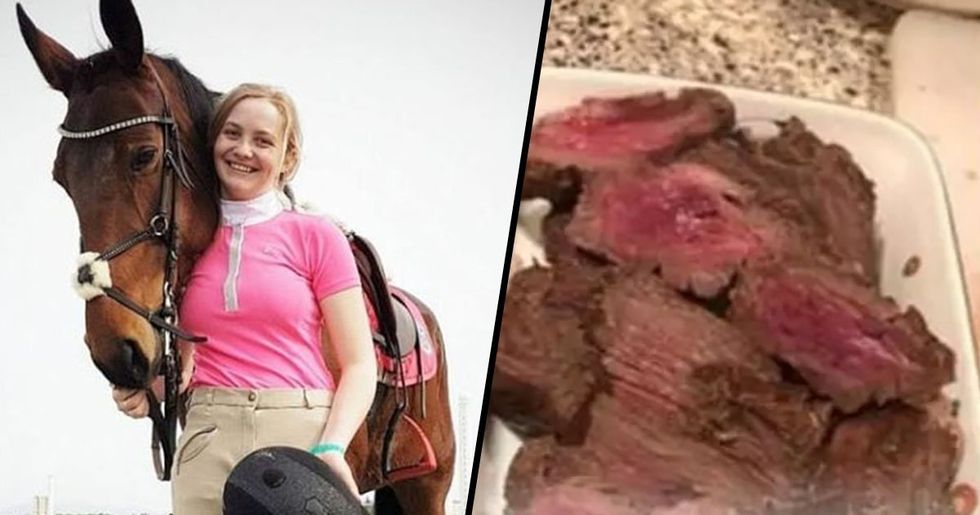 Teen Eats Her Own Horse After It Was Put Down

"People are eating their pets, are we in an apocalypse?" "Surely that defies some sort of pet code?" I hear you splutter as you hold your cat tightly to your chest...

But, listen, see, I don't actually think that Pia Olden, the Norweigan teenager who ate her own pet horse, is a monster.

The eighteen-year-old received death threats after posting online about eating her horse and, as much as it was probably a good lesson in thinking before you post, I don't think that the onslaught of abuse was warranted.

I guess it's kind of funny that a horse girl ate her own horse, but this viral story is much more complicated than that.

Pia Olden is a horse lover.

Personally, I'm not a fan of the great beasts. If I passed a donkey, I might go over and stroke its mane, but I would avert my eyes if a horse crossed my path.

Pia comes from a family of farmers.

Olden is not unfamiliar with the meat industry and understands a lot about the process that animal meat goes through before it's packaged up in plastic and sold off the supermarket.

Pia was called a bunch of names following her post.

Although I'm sure that Olden must have been aware of how squeamish some people are at the idea of eating horse meat, I don't think that she expected such a negative backlash. Even after deleting the original post following death threats, the eighteen-year-old is still getting nasty comments under her other posts and photos.

Horse meat is normal in some cultures.

For those that come from a culture that doesn't think horse meat is weird, the abuse delivered Pia Olden's way just seems a bit ridiculous.

Okay, I'm not going to pretend that I have the most adventurous palate, I wouldn't eat crocodile or go wild for a kangaroo burger...

Apparently, in Sweden, you can get horse salami.

According to the Swedish dudes discussing it on Twitter, horse salami is a thing -  and so is stag salami! So if you've ever wondered what made those Ikea meatballs so darn delicious...

I know you might have thought that's what I was suggesting with the above use of ellipsis, but I assure you, I know nothing about Ikea's meatball recipe. What I do know is that they're cheap and delicious, isn't that enough?

Why are we so against eating a horse?

Most of us don't have pet horses, right? Plenty of people bet on horse racing, which leads to the deaths of thousands of horses every year, so why don't we want to put them in our burgers? Personally, I blame horse girls.

Pia said that most of the abuse came from horse girls.

Speaking to the Norwegian news source, Dagbladet, Pia spoke about how shocked she was to get so much abuse for eating her beloved horse, Drifting Speed. She explained: "The ones who responded most strongly are horse girls who have a horse themselves. For them, eating a horse is like eating a family member." Pia (rightly, in my opinion) sees this as naive. Expressing her own beliefs, she said: "Horse meat is a delicacy, and when the horse had to be killed anyway, I thought it was okay to eat it."

There's no denying that Pia is a bit of a horse girl...

But she's also a farmer's daughter and is not freaked out by the realities of the food industry. Drifting Speed had died the summer before, and his meat was stored in a freezer. So it wasn't exactly like Olden was crying over the death of her horse while eating a big bowl of Drifter Speed stew.

They're associated with wealthy, snobby girls, who's daddies can afford to get them a horse and pay for stables. They're generally seen as the tall, Taylor Swift-looking types that don't invite you to their birthday party because there's simply no more room... *cough* Danielle Elford 4th Grade *cough* (I mean, I'm totally over it...).

Actually, in recent years, the notion of a "horse girl" has been reclaimed.

Or perhaps it's horses in general that have been made cool. And that, my friends, is all down to one depressed animated horse: Bojack Horseman.

Bojack's a horse that speaks the truth.

Or at least a horse that says all the dark thoughts we've had.

Bojack is the cartoon that none of us knew we needed.

Voiced by Will Arnett, Bojack, the central character in the "sad horse cartoon," brought to us by Netflix, grasps beautifully with the trials and toils of mental health issues.

Kinda weird that a cartoon horse taught us about being human...

But, weird or not, the show works. And season 6 is right around the corner... Netflix has announced that it will drop a whole tray of new episodes on October 25th.

If we can get so emotional over a cartoon horse...

Maybe that explains why so many people got angry at Pia OLden? I mean, she basically ate Bojack... as Aaron Paul's character, Todd, might say: "Not cool, man."

I mean, I completely agree with this Twitter user, but can't we hate both? There's plenty of hate to go around...

"No, I don't want to know how big your engine is."

The only thing that will impress me about your car is which novelty air freshener you choose to hang above the dashboard. Sorry, not sorry.

One thing did trouble me about the whole eating her horse thing...

It was the way she prepared it. Now, apparently, eighteen-year-old Pia Olden is an apprentice chef. With that in mind, you'd think that she would knock up quite the dish, right? Well, see for yourself...

I'm all for putting mango in a salad, heck, this summer, I basically lived on a prawn mango salad, but Pia Olden's horse meat mango chili affair is not selling it for me. I think that, if this waste-not-want-not advocate wanted to persuade people that eating your pet horses is a good idea, she should've made a more appealing meal. Horse pizza, horse burritos, horse kebabs? Think about your audience, Pia!

Still, Pia's message was understood by some.

As much as her post garnered criticism, there were also those who supported what Pia was trying to say. Is Pia the Greta Thunberg of the meat industry? Well, hold your horses... (hehe). Continue scrolling to read all about how Thunberg has made some enemies in Rome... honestly, who knew people hated recycling so much?!