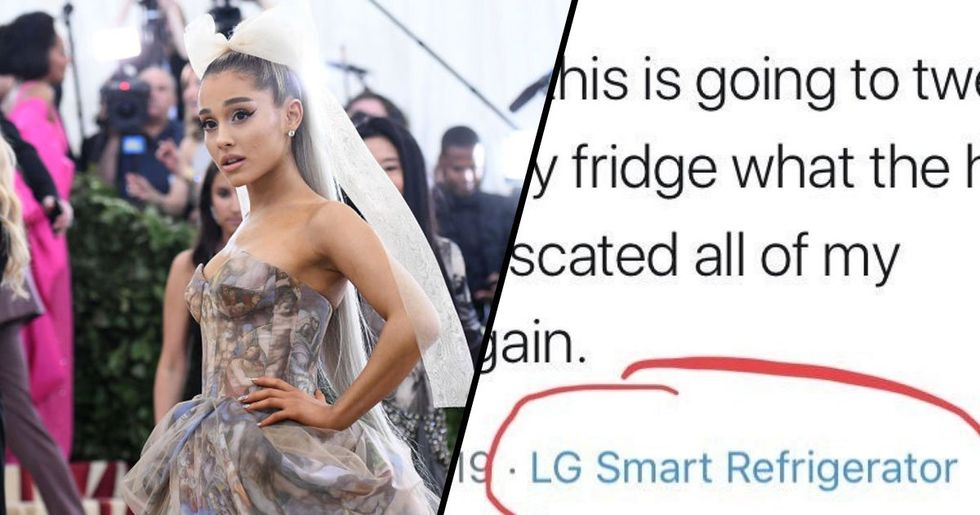 Having a teenager in today's modern world must be more than challenging. Attempting to pry your teen away from their screens is becoming an ever-increasingly difficult challenge for parents across the world.

When we were kids, our parents used to threaten that spending too much time in front of the TV would turn our eyes square, that too many cartoons would fry our brains, and that spending hours on the phone to our friends that we'd spent all day in school with was not only going to rack up a big bill, but that it would also mean that poor grandma wouldn't be able to get through.

Nowadays, kids have a lot more to contend with than just the TV and the home telephone. A teenager's socials are their entire existence. Being told to sign out of their Twitter, Instagram, and TikTok (?) accounts by their concerned parents is like being asked to go walk on hot coals, eat gum found on the sidewalk, or go to the dentist (all of which they would probably agree to as long as they could send a Snap about it).

So, what do you do when your child refuses to get off their cell? Well, one mother discovered just how impossible it is to get a teenager to disconnect when she confiscated her cellphone. Here's what happened...

If your teen is part of a Twitter fandom, you will understand the struggle...

Teenagers have always had obsessions with pop stars. Even your mom probably had a poster of Donny Osmond on her wall.

But a crush on Donny Osmond was harmless, right?

Besides playing The Osmonds' records on repeat, plastering walls with Donny's face, and cutting his interviews out of Jackie Magazine, fans of the pop star could do little else.

The distance between stars and their fans used to be impenetrable.

Back in the day, if you were to send fan mail to your favorite celeb, the likelihood of getting even an autograph response was slim.

Social media has made communicating with celebrities a much easier task.

Social media also makes it easier than ever before to terrorize celebrities.

Previously, celebrities only had the tabloid press to defend themselves against. Nowadays, any Tom, Dick, and Harry can say nasty things about them online and they just have to take it.

Some online trolls are more creative than others.

It takes real artistry to become a successful online troll.

Perhaps more dangerous than the trolls though: the fans.

Whether they're Beliebers, Janoskians, Little Monsters, Swifties or Arianators, finding their tribe online unleashes an otherwise harmless teen into an army of fiercely allegiant fans.

A teen engrossed in fandom may as well have joined a cult.

The loyalty and dedication to the cause (whichever celebrity figure that might be) is nothing short of all-consuming.

Teens can already be susceptible to spending a lot of time glued to their screens, but if they get hooked on following the comings and goings of a celebrity their time online will increase ten-fold.

Being part of a fandom is a full-time job.

Forget school and homework, Ariana Grande has just released a new EP! Someone needs to make gifs, we need fan art, we need to get #arianaforever trending, we need to put the haters in their places, and we need to send some hate Pete Davidson's way because the track is obviously a diss to him.... Oh also, when is the tour coming? Ariana? Ariana? Listen to me! I'm your biggest fan! Hello?

Ariana Grande has a strong fanbase.

i love singing to y’all so much. seeing your faces makes me so fuckin happy. your reactions to everything are so sw… https://t.co/jm1flsGcPC
— Ariana Grande (@Ariana Grande)1557610771.0

With 64.8 million followers on Twitter, the Nickelodeon-actress-turned-singer-songwriter, I think it's fair to say, is fairly popular. I mean, I like Ariana Grande, sure... "Thank u, Next" is up there as one of the best break-up songs of recent times, but I don't think that I could consider myself an Arianator by any means.

Grande is good at social media...

Scrolling through the singer's Twitter is like a lesson in how to have strong engagement. It's really no wonder that so many young fans can't peel themselves away from their Twitter feed, when their favorite star is constantly teasing the next track, the next announcement, and religiously confirming again and again that she does, indeed, "love [them.]"

Imagine how much it means to an awkward teen that their favorite celeb "cares."

Picture it, you're arguing with your mom all the time, your dad doesn't get you, your friends at school are always teasing you, you can never get your hair right, you've got pimples everywhere, and when did your arms get so chubby? Life's a mess, right? But, hey, look - you've just got a notification that Ariana Grande has tweeted: She says that she loves you so much and that you're perfect just the way you are. Suddenly everything doesn't seem so bad.

The Twitter format makes it seem as though the fans are actually talking to Ariana.

These online relationships with fans can become pretty intense.

Everything is all good in the fandom until the celebrity drops off the social radar for a little while. The fans become helpless and, like a cult without a leader, they become directionless.

@thankunext327 (aka Dorothy) is a dedicated Ariana Grande fan.

She is a prominent figure in the Arianator community and has over sixty thousand followers. Weirdly though... she doesn't actually follow Ariana Grande?

Dorothy became famous in her own right this week.

The Grande-obsessed teen tweeted to her legion of followers that her mom had confiscated her phone. She cleverly communicated with them through her Nintendo 3DS.

I expect that her mom got tired of the teen spending all of her time on Twitter.

But the news that Dorothy's mom had confiscated her cell made the Arianators rage and demand that the teen was allowed back on the social media site. She was also praised by the other fans for her resourcefulness in using her Nintendo.

Dorothy's attempts to get back online continued...

Her mom tweeted from Dorothy's account, announcing that she had realized that the teen had hoodwinked her by using her Nintendo DS. In response, her mom threatened to shut the account down.

In protest to Dorothy's mom's Twitter ban, the fans started the hashtag #FreeDorothy. And, in classic young-person-technology-smart-ass-ness, many were quick to call out Dorothy's mom for saying "Nintendo" rather than "Nintendo 3DS..." Give me strength.

Dorothy's mom was also accused of abuse for taking away her daughter's devices.

Talk about a snowflake generation.

Dorothy found her way back onto Twitter through her Nintendo Wii.

This kid sure has a lot of gadgets...

While her mom was at work, Dorothy took to Twitter again from her Nintendo DS to alert everyone that she was searching for her cell. ... You know, just keeping everyone informed.

By the time that Dorothy was next online, #FreeDorothy had blown up.

Dorothy assured her followers that she would be online later while at a friend's house.

Dorothy seemed to be very thankful for the support that she had received following her cell's confiscation.

Even Twitter had issued support to the device-less teen.

Whoever runs the social media site's page also replied to one of Dorothy's fans with the affirmative comment that she is "An Icon." I mean, Prince is an icon... but some kid who couldn't handle getting her devices confiscated? Right.

So desperate was Dorothy to stay online that she even tweeted from her LG Smart Fridge.

That's right... the teen couldn't bear to wait however long it was until she was going to her friend's house for a sleepover that she worked out how to get on to Twitter using the fridge.

Tweeting from the fridge was next level.

Twitter erupted after Dorothy tweeted from the fridge, with people commending her efforts to stay connected left, right, and center. Since posting from her LG Smart Fridge, the tweet has garnered 21.6 thousand retweets and 83.6 thousand likes.

LG Electronics even tweeted in support of the resourceful teen.

With her alternative Twitter enabling device being an LG product, the provider thought that they ought to chip in and announce their support for the teen.

Dorothy was seemingly overwhelmed by the support.

Thanking everyone who had been part of the #FreeDorothy campaign, the teen announced that she would try to get her devices back asap to thank them "properly." I'm not sure what thanking people properly means over Twitter... maybe she'll live stream or make a gif or something. I guess we'll have to tune in to find out.

If I was Dorothy's mom, I wouldn't give her the cellphone back.

I'd trade in her Nintendo DS for an Amazon kindle (the kind without internet connection) and I'd unplug the fridge.