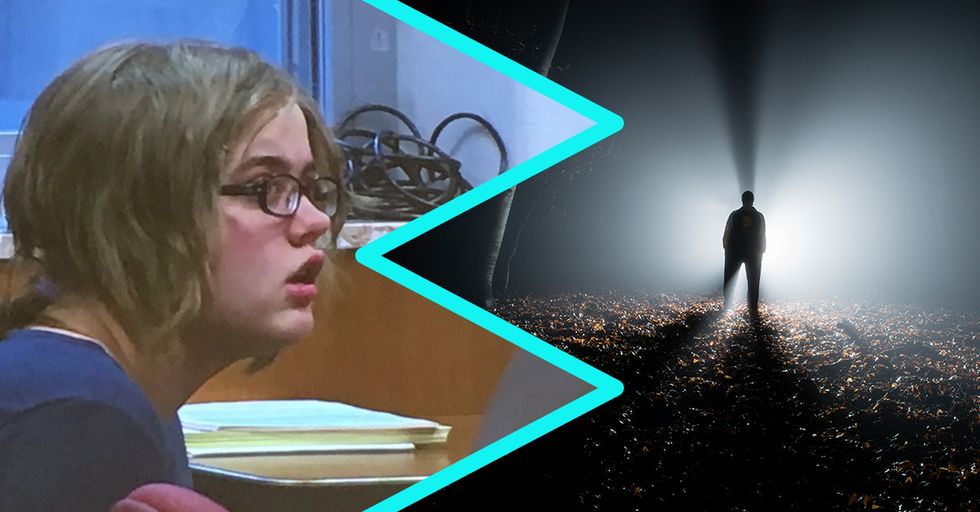 The "Slender Man" case gained notoriety in 2014 when two young teen girls lured their classmate, Payton Leutner, into the Wisconsin woods and stabbed her nineteen times. After several years of court proceedings, the case's final defendant was sentenced on Thursday to spend the next forty years in a mental institution.

A creepy case is finally closed.

It's been almost four years since the stabbing of Payton Leutner, who was only 12 years old at the time of her near-fatal attack. Leutner was stabbed a total of nineteen times by her then classmates, Anissa Weier and Morgan Geyser, who were also 12 years old at the time of the crime. The sentencing of the second offender in the bizarre case, Morgan Geyser, took place Thursday, bringing the now infamous case to a close.

The two teens claim they believed that they had no choice.

The Slender Man case surrounded an eerie internet character, "Slender Man," who Weier and Geyser claim convinced them to stab their classmate in order to protect their families from meeting his ill-will. Geyser, now 15, is said to have stabbed Leutner a total of nineteen times, nearly ending her life. Leutner was able to escape the Milwaukee woods by crawling to safety and seeking the help of a bicyclist who was passing by.

Geyser's psychiatric state plays a role in her final fate.

Morgan Geyser still claims to hear voices, particularly the voice of a girl named "Maggie," and was diagnosed with early-onset schizophrenia in 2014. Because the judge agreed that Geyser is mentally unfit to stand trial, she was able to strike a deal with prosecutors, avoiding jail time in exchange for a guilty plea.

Geyser's defense claims she is no longer a threat to society.

Geyser's defense team claimed in court Thursday that, while the teen is still mentally ill, she no longer experiences psychotic symptoms, and therefore, she is no longer a threat to society. The Associated Press reports that the attornies requested Geyser be allowed supervised outings and had two doctors testify to her stable condition.

Court back in session for #Slenderman stabber Morgan Geyser. Though she was determined not guilty of attempted ho… https://t.co/8DSEwSwVFJ
— Nick Bohr (@Nick Bohr)1517513904.0

The Associated Press reported that Weier, the first perpetrator sentenced in the case, plead guilty to attempted second-degree intentional homicide. Yet the teen, now 16, claims that she suffers from mental illness and cannot be fully held accountable for her crimes.
Agreeing with the diagnosis, the judge sentenced Weier to the maximum possible punishment under the law, which is  25 years in a psychiatric institution. Weier will be 37 years old when she completes her sentence.

The prosecutors were not so convinced.

However, prosecutors argued to the court that Geyser's tendency to hear voices is evidence of her current mental instability, and noted that she had reported hearing voices as recently as September of 2017. A doctor for the prosecution testified in agreeance, claiming that Geyser is still very much a dangerous person.

Geyser offers an apology to her victim in court.

Geyser made a statement in court in which she apologized to Payton Leutner, who was not present nor were her family members. Buzzfeed reports that Morgan Geyser emotionally told the court, “I just want to let Bella and her family know that I’m sorry." Weier also apologized during her sentencing hearing and told the judge that she holds herself accountable and will do everything in her power to battle any future delusions that she may experience. Buzzfeed reports that Weier stated:

Payton Leutner may have survived but she is forever traumatized.

We are waiting to hear from the victim's family. Stay tuned for their thoughts on the 40-year maximum sentence. Thi… https://t.co/FQYs9x0UkD
— Lindsey Branwall (@Lindsey Branwall)1517525082.0

While Payton and her family did not attend the sentencing of Geyser, a spokesperson for the family read a statement on their behalf. The letter, written by Payton's mother, stated that "the horrific premeditated attempted murder will stay with [her] forever, and stay with the family forever." Prosecutors said in court that "Payton is looking at a lifetime of scars, physical scars, and psychological scarring."

The Associated Press reports that the Judge ultimately sided with Prosecutors, stating, “What we can’t forget is this was an attempted murder." He also cited Geyser's institutionalization as a matter of "community protection" as he believes that she remains a danger to both herself and society. Ultimately Geyser was sentenced to forty years in a mental institution. While Payton Leutner remains traumatized by the 2014 stabbing, her attackers will spend the next few decades institutionalized.

The gavel has swung, but Geyser will seek early release.

“She can petition to get out every six months and I presume we’ll do that," said Geyser's defense attorney following her sentencing. The Milwaukee Journal Sentinel reports that Geyser may still seek release under specific conditions in the future, although she would have to acquire the approval of both the judge and staff at her treatment facility.