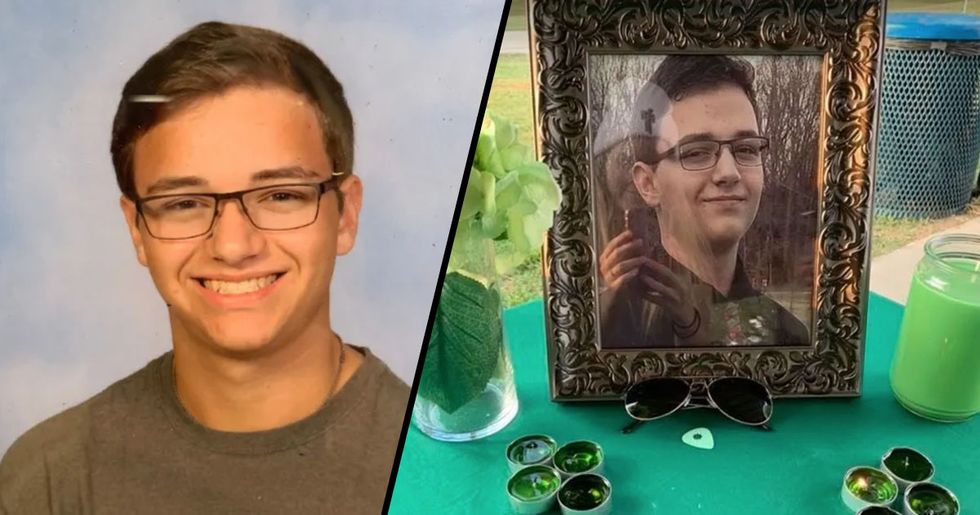 It is stories such as this one that make me angry at those who don't understand why the LGBTQ community has to march for their rights. In 2019, there is still a stigma surrounding the issue of identifying as gay or bisexual or queer.

High school is already hard enough without having to face the judgment of your peers. And it becomes even harder when that judgment is aimed at a part of you that you can't change. This teen in Tennessee found it too much to bear, so he ended up taking his own life after a classmate leaked some private messages on social media between him and another boy.

Keep reading to find out all the details around this heartbreaking story.

A teenager in Tennessee took his own life after another classmate posted explicit messages online.

This is the biggest problem with social media. The impact of something like this is so dramatic to handle, especially for a teenager. They end up believing that the attention around the issue will never die down.

We've seen so many stories of unsolicited photographs and screenshots ruining the lives of children.

A similar story hit the headlines a little while ago wherein a fifteen-year-old girl from Tampa, Florida, committed suicide after a nude photograph of the teen was posted to Snapchat.

And who could ever forget the horrific news about this twelve-year-old girl?

Two young girls, twelve and fourteen, were arrested in connection to the death of Rebecca Ann Sedwick after they had encouraged her to "kill herself" online, while also prompting others at school to bully the teen.

Bullying is just one of the major problems faced by those in high school.

It becomes suffocating when you're trying to balance every aspect of growing up in the condensed time frame that is high school. And with the introduction of social media in children's lives, things have only gotten ten times harder.

You would think people would learn from previous horror stories about teen suicides...

But that doesn't seem to be the case.

And this story just further highlights the dangers of living in a "social" society.

Channing Smith, sixteen, killed himself after he saw a flurry of his own messages posted to social media in which he and another boy at the same school, engaged in an explicit conversation.

The screenshots were posted to both Instagram and and Snapchat.

These two social media giants have the capabilities to spread news far and wide, so when the posts were uploaded, Smith saw his own inbox flooded with abusive and hateful messages from students at the school.

The classmate that uploaded them outed Channing as bisexual.

This became a problem as, at the time, he had a girlfriend. Hailey Meister was left stunned after she found out her boyfriend had committed suicide due to the messages uploaded to Instagram. At 4.A.M, Channing Smith's father, came into his room after he saw his son's light still on and found his body.

The culprit who took the screenshots was an enraged friend of the other boy Channing was texting.

This led to an altercation between the two as the other girl, who remains unnamed, was angry at the fact that she didn't know he was sexting her friend. And then came the screenshots on Instagram.

Hailey Meister, the girlfriend, said that the bully wanted to do was "to humiliate him."

She also revealed that the messages were actually old and had been dug up just so she could post them online. Apparently, Channing also confided in her when the messages were initially uploaded to Instagram as the two had been dating for the past month.

He told Hailey that it was a mistake and he was just trying to find himself because he didn't know exactly who he was. I mean, you can't blame the boy for that at all. High school is the testing ground for discovering parts of you that you want to carry forward with you.

He also told her how some people referred to him as "bisexual."

And that made him uncomfortable due to the fact that he never actually identified that way.

Keylee, Duty, a junior at the same school, said the girl was doing it "just to be mean."

Keylee started an online group called "Justice for Channing" and helped organize a memorial for him. She also told BuzzFeed that other teens had "bullied Channing even before the social media attack, calling him names and saying that 'no one liked him' because he sometimes 'talked in a girly voice and walked with sass.'"

Even though he seemed like a happy boy, Channing grew up in difficult circumstances.

His brother said that they all grew up in a "stereotypical small, Southern town," wherein "you could be gay and still like the Confederate flag and shoot pistols." He also added that it was a "complicated" situation.

Channing's brother also talked about their father, who was a "conservative man."

"My dad is ultra-conservative, but would never disown him, but him being gay or anything like that would have been a hard conversation." Apparently, in a state like Tennessee, being outcasted as a "gay, queer, or a sissy," would have been devestating for his little brother.

Now, Joshua Smith and the rest of Channing's family are trying to pressure the District Attorney to investigate the case.

However, the investigation was shut down after a day because apparently, the Coffee County District Attorney, Craig Northcott, said that they didn't have the resources or the technology to "bypass the passcodes" on the bullies' phones.

They didn't even try to confiscate the children's phones.

"My dad and I had to press the issue and tell them to get a search warrant. They told us that they didn’t have the resources to get into the phones," he said.

So let me get this straight...

...They didn't even ask the kids to put the passwords into their phones. Instead, they're deeming the entire investigation worthless because they can't do a simple case of hacking? I'm utterly baffled at the response.

However, now the District Attorney is facing immense backlash.

The people of Tennessee are accusing Northcott's office of promoting hate after they said that same-sex couples aren’t entitled to protection against domestic violence. Previously, they had also stated that Islam is an "evil belief system," though their views align perfectly with what they try and perceive as "extremist views."

In order to defend themselves, their leader posted this:

"I, like the rest of the community, am deeply saddened by the tragic loss of the young life of Channing Smith. I express my heartfelt condolences to his family. My office has encouraged, cooperated in and supported the investigation into the events leading to this death. Ethically, I am prohibited from commenting on an open investigation or prosecution. However, procedurally, no charging decisions have been made by my office nor has the Coffee County Sheriff’s Department asked for a decision since the investigation has not been completed."

They also added that the investigation is still ongoing...

"When all relevant facts are available, my office will advise the Coffee County Sheriff’s Department on what charges, if any, we believe are appropriate to help guide it in that decision. Any report that my office has failed or refused to act is inaccurate and I wanted to clarify this for the sake of the Smith family as they do not need the added burden to the already incomprehensible pain that they are experiencing."

The school in which Channing attended also lined up with these pathetic excuses.

When questioned as to why they didn't release a statement over the death of one of their students, this is all they had to say: "The principal told my father that he felt like we would not want anything at our memorial service that says justice for Channing, which was total bullsh*t," Joshua said.

He also revealed that there was no support for any of Channing's friends who are grieving.

"They haven’t made any mention about him or his death on their website, on Facebook, anywhere," his brother said. “They haven’t offered counseling to the kids or gathered them to talk about anti-bullying."

The school has also come under fire for not honoring his life.

Coffee High didn't even decide to post a statement after hearing the news. So in retaliation, the students took matters into their own hands.

They decided to hold a "strike" during a homecoming rally.

This was so they could honor the life of Channing, while simultaneously condemning bullying, something that the authorities and school leaders failed to do. They also decided to make spray-painted shirts and bright posters declaring “Justice for Channing."

However, the principal shut down their way of celebrating Channing's life.

Keylee Duty, the leader in the memorial service, said that the principle forced them to “take the shirts off and put the posters away."

But Keylee and her classmates remained undeterred.

"We refused. Not only me, but his close friends and people who loved him stood during the assembly holding our posters. We believe the school refused to do anything because what happened to Channing involved gay rights." How disgusting. I'm glad these students stood up for what is right.

Before Channing decided to take his own life, he told another girl about his mental well being.

Joshua revealed that another girl had said that Channing really wanted to kill himself but he seemed fine at the end of the call so she didn't think that he was really going to follow through on it. Unfortunately, he did.

So his older brother warned others, if they hear a line like that one, they should report it.

"I just want to tell people if someone says that, follow-through, report it, don’t let it go." He and his family have been left completely devastated over the incident, as one would be.

“He loved being around the people he loved."

In loving memory of Channing Smith, who would have turned seventeen on November 20th. Though he hardly ever talked about his own feelings, he always made sure everyone else was doing alright. Hopefully, justice prevails. Rest in peace, Channing.