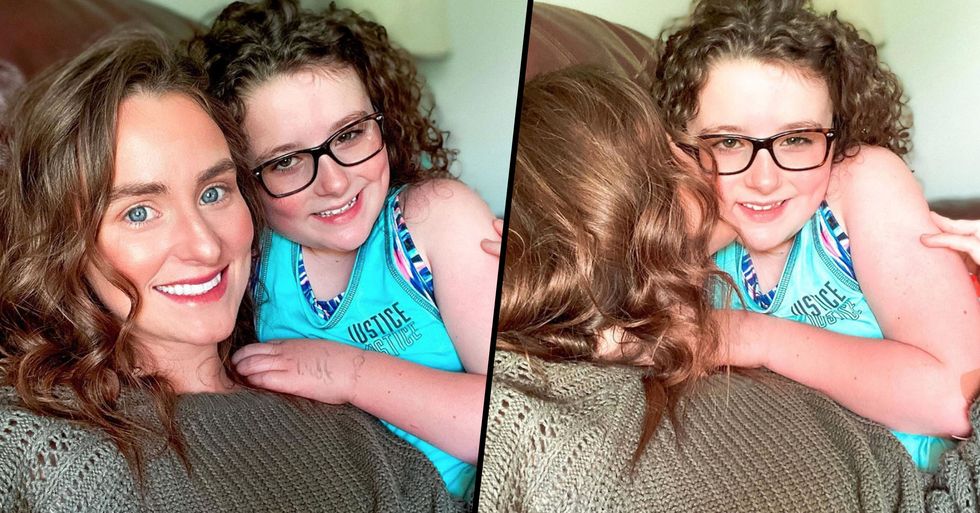 Raising a child with a disability is no easy task at the best of times, constantly worrying about whether you're doing the right thing looms at the back of every parent's mind.

One of the things any celebrity has to come to terms with is trolls, and they seem to be targeting Teen Mom 2 star Leah Messer's daughter.

The hateful comments about Ali are sickening. Keep scrolling for the full story, and Messer's powerful clap back...

Teen Mom 2 star Leah Messer is known for her candor.

And she’s never been more real than now.

Messer is the mother of three daughters...

She had 10-year-old twins Aliannah and Aleeah with her ex, Corey Simms, and 7-year-old Adalynn with ex, Jeremy Calvert.

The star has been on camera since 2010, which has documented her romantic ups and downs, as well as her struggles as a young mom.

One of the biggest struggles Messer has had to face is her daughter's tragic diagnosis.

At 4 years old, Ali was diagnosed with a rare form of muscular dystrophy.

In her recently released memoir, Hope, Grace, & Faith, Messer opened up about her daughter's health struggles.

Shedding a light on the unique disease.

It's the lack of research that worries Messer.

“It’s still scary because Ali is the research. The disease that she has is one in one million," Messer says of coping with the 2014 diagnosis. “There’s not very many people that have it. And as she grows, we learn more about it."

But that's not the only thing causing Messer to worry...

People have been leaving sickening messages on pictures of her and her daughter.

Somehow Messer has turned the whole thing into something positive.

On Sunday, Messer shared that she was "sickened" by the hateful messages that some of her followers posted.

"Some of the comments on a photo of me with Ali are despicable. I'm sickened."

She retaliated in the most inspiring way.

"What world are we living and raising our children in? "Let's teach all of our kids that we are each born with unique differences that make us the beautiful individuals we are!!!"

The haters should be ashamed of their comments.

"We are all different and that is BEAUTIFUL!" She added.

No mom can prepare for such disgusting comments about their child.

And they just kept coming.

Who did nothing to deserve them.

They targeted her for her disability.

Which is the lowest of the low.

Some suggested Messer should turn the comments off.

And shared that they hope her girls don't have social media.

Her clap back tweets came after she shared 2 photos with Ali on Instagram.

The pictures of the pair show just how much Messer cares for her daughter.

Messer can be seen spending some quality time with Ali, which prompted some vial trolls to try and ruin it.

She wants Ali to be free to do everything she wants in life, just like her sisters.

"I'm fighting for Ali — I'm going to do everything that she needs done," she vowed. "We wanted her to be independent, and at the same time things are becoming progressive."

Check out the post that has sparked an uproar...

Messer delt with the trolls in the best way possible. Keep scrolling to find out why fans are worried about bullied schoolboy Quaden Bayles...